FLOODING IN ACCRA, THE RIPPLE EFFECTS OF CHOKED DRAINS. 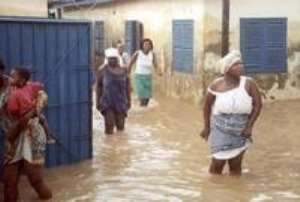 Every year in June through July, when the rains come, many Ghanaians lose their precious lives to floods. Children, majority of who live in the outskirts of the city stay out of school because classrooms and even churches are not spared by the floods rendering thousands of people homeless. Many public and private Properties worth millions of cedis are destroyed compounding the already unbearable economic hardship and unemployment that is confronting the nation.

There is always a panic reaction or what could be called “Fire service approach” to solving this problem and this has not yielded any positive result. A lot of discussions and lamentation are made on our air waves by experts and the citizenry on the issue tentatively and nothing is heard of it again when the dust settles. The National Disaster Management Organization (NADMO) is called to action, they send food, clothes, drugs and other relief items to flood victims, provide them with shelter and make recommendation to the government about how to avoid future occurrence. Government sets up committees to look into the situation, some homes which are perceived to be on water ways are demolished and nothing is heard of the situation again until it reoccurs the following year. Unfortunately, choked drains which are the main cause of flooding in Accra have not been given the needed attention by both inhabitants and the authorities of the metropolis. Flooding of the city during the rainy season has therefore become a cyclic cataclysm.

Majority of the drains in Accra are not covered and therefore highly exposed to misuse by individuals and industries who dispose all manner of solid and liquid waste into them. Some residents of the city indiscriminately pollute our drains and choke them with filth. A walk through some principal streets of Accra during the day and night reveals numerous food vendors who sell their food very close to the drains (gutters). This story is not different from other suburbs of the capital city. Many of these food vendors use the drains as refuse damp and drop virtually anything they create as waste into them. This inappropriate act does not only contribute to already ascending malaria cases and other filth related health complications, but has also caused the city's drainage system to choke.

Large amount of solid wastes majority of which are iced water and iced cream sachets, canned drink containers, sugar cane and orange peels and many others are created by passengers and vendors at lorry stations in the city. The sad story is that, this huge solid waste is not properly managed and as a result ends up in the city's drainage system when it rains. This inevitably causes the drains to choke and make it almost impossible for liquid waste to pass through the drains unrestricted producing pungent odor and causing nuisance to the public. This situation is further worsened by passengers who indiscriminately throw whatever waste they create onto the streets when they are onboard a vehicle.

Another infamous act that has become very rampant is discarding of all forms of waste into our open drains indiscriminately by some inhabitants of the metropolis during heavy rains. This is done with the erroneous impression that, the garbage would be carried to the sea. These solid wastes tend to pile up at certain points of the drainage systems forming a blockage and impede the free flow of liquid waste and rain water. During heavy rainfall however, the incoming rain water therefore has no option but to overflow the drains and end up in people's homes and offices and the devastating effects cannot be underestimated.

Traders at our various market centers create all forms of solid waste which are mostly not properly managed. The wastes created are therefore left to accumulate for several days forming heaps which are washed into our drainage system when it rains. The city's drainage systems which are not designed to isolate solid waste become choked and thereby impeding the free flow of water through it. During heavy rains, the impediment caused by filth in drains forces rain water to find alternative and unnatural route leading to the loss of valuable lives and property.

There is something fundamentally wrong with how most of the city's drains have been constructed. One does not need a technical eye to see that the grains are too shallow and not big enough to contain the volume of the vast water that flows through them during the rainy season. This limitation of the city's drainage system causes water to overflow onto the streets destroying them and in some cases carry vehicles and their unfortunate occupants away. This evidently reduces the life span of the city's roads owing to the numerous “pot holes” that emanates as a result of the high pressure that accompanies the rain water that flows over it. In the July 2009, the road that leads to Kaneshi Market from First light was reduced to wrecks after a heavy downpour due to choked drains along the main Kaneshi High way.

The way forward
There is a need to find a long term solution to the cyclic problem of flooding in the nation's capital city. The first and most pertinent issue to address is how to manage the thousands of tons of solid waste that is created in our homes and various public places in the city daily. The city authorities and other civil servants that are paid by the tax payer to ensure good sanitation is maintained should be held accountable for the heaps of filth created at various public places because they are paid to ensure that, environmental rules are adhered to by all. This way, they will always feel obliged and the need to ensure that the city is free of filth as they are mandated by the constitution of the Ghana.

There is the need to prevent food vendors from selling close to open drainage systems. Culprits found throwing solid waste into drains should be arrested and prosecuted to serve as deterrent to prospective offenders.

It is very imperative to ensure that solid waste especially; those which are not biodegradable are properly managed at markets, lorry parks and other public places to prevent them from flowing into the drains and causing them to choke. The leaders at these public places should enforce sanitation rules and the city authorities should also make it compulsory for drivers to keep Thrash Bins in their cars so that passengers can drop thrash into them. This will help reduces the littering of the streets by passengers.

There is also the need to construct deep drains that are big enough to contain the vast of rain water that is produced during the rainy season. The city authorities, NADMO, opinion leaders and all stakeholders should act now. They should not wait for Accra to lose precious lives and property next rainy season. The time to save lives is now! Lets rid the city's drainage system of filth.