Who says we can't have Entry and Exit points along the Accra-Tema Motorway? 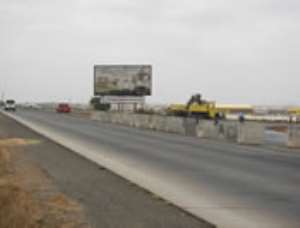 Certain things are just so obvious and so glaring that when they are not done right, even a three- or four-year old child could point them out to you right in your face and you can only gasp: hmmmmmmm. One of those is the very first “motorway” ever built by our very first president, Dr Kwame Nkrumah of blessed memory. In the days that this highway was built, the land on both sides was all virgin, with absolutely no development whatsoever for miles and miles on both sides. Therefore Dr Nkrumah saw no reason to construct entry and exit points along this highway. In those days, they would have led to nowhere, period!

It is an entirely different story today, and you don't need a rocket scientist to tell you that this highway desperately needs exit and entry points to facilitate easy access to places like East Legon, Adjiringanor, Trasacco Valley area or the very congested commercial hub called Spintex Road, with its surrounding suburbs like Airport Hills, Batsoona, Sakumono, Lashibi, Nungua and Tema itself.

Fifty or so years have passed since the Accra-Tema Motorway was built. Over those 50 years, factories and warehouses have sprung up along the Southern side of this Motorway and houses upon houses have mushroomed along the Northern part. For all I know, there is definitely an authority in Ghana in charge of highways, called the Ghana Roads and Highways Authority. I am going to assume that this is the government department in charge of the Accra-Tema Motorway. Again, I am going to assume that the people who man this department are professionals in their own right, who have been trained in their field of endeavor and who are very competent at what they do. I am therefore going to assume that they know exactly what they are supposed to do in their department. I am also going to assume that some of these officials have been sent abroad over the years to study how highways are constructed and managed, sometimes even to generate lots of revenue for both the authority and the municipalities in which they are built. If so, have any of these officials ever been to New York City or London? Have they seen the complexity of highways and freeways and turnpikes with their interconnected subway systems, exit and entry points, with toll booths positioned at strategic locations along these highways, briskly collecting tolls for the authority and the cities they run through? Within the last 50 years since the Accra-Tema Motorway was built, have any of these officials ever been to any of these cities either privately or on official duty, or on highway construction and management courses? Have they? If they have, did they notice that the traffic system in these cities is organized in such a way as to ease the congestion in these cities rather than worsen it? Did they see the several entry and exit points along the highways, all with toll booths? If so, did it occur to these officials to replicate the same thing here in Ghana to ease all the traffic congestion at both ends of the Accra-Tema Motorway?

Drive along this highway today and you cannot exit from any other point unless you reach the Tetteh-Quarshie roundabout. This is the same roundabout where everyone from Accra Central ends up, folks driving from Kumasi end up, people from Madina, East Legon, Kwabenya, Agbogba and the Atomic Energy area all end up, and of course, the people driving from Keta, Aflao, Nigeria, Togo, Ho, Akosombo and Tema all end up. The congestion at this roundabout is legendary and has even been exacerbated by the construction of the Accra Mall. Who exactly in his brightest mind thought this was the right location for a Mall, only God knows. So day-in-day-out, the hellfire of traffic congestion and total confusion at this one location continues and we all keep wondering why we are always bumper-to-bumper on all the major roads leading into the Accra metropolitan area.

So you drive along this Motorway and if you are going to Trasacco or East Legon or Adiringanor, you can easily see your house in the distance but you cannot exit the freeway to quickly get to your home. You have to go through the baptismal fire and the design flaw called Tetteh Quarshie, to fight all that traffic before going to your home! If you are on the almighty Spintex Road trying to get to Accra or Tema quickly, you are wondering why you couldn't get on the Motorway to speed it up and get to your destination quickly. Then you notice the bumper-to-bumper traffic on all the other major highways leading into Accra, and suddenly it dawns on you that those highways also don't have any significant number of entry and exit points leading to and from them into the city. Then it dawns on you that it is the same government officials at the same government department who are in charge of those highways too. Then you only chuckle to yourself: Lord, have mercy!

Truly, there are certain things that are so obvious, so palpable and so basic that even a five-year old child could figure them out. Fortunately, it is the same Highway Department who thought it smart enough to create an exit point that passes the front of Tema General Hospital, avoiding the congesting and overcrowding at the Tema end of the Motorway. Why in the world this same department could not replicate the same thing several points along the rest of this highway to ease the hub of total confusion and nightmare at Tetteh Quarshie, someone from this department should gather the courage to get on national TV and explain it all convincingly to us, his/her fellow Ghanaians. We pay your salaries, Sirs! This is your professional duty: explain it to us!

Who says we can't have exit and entry points along the Motorway?