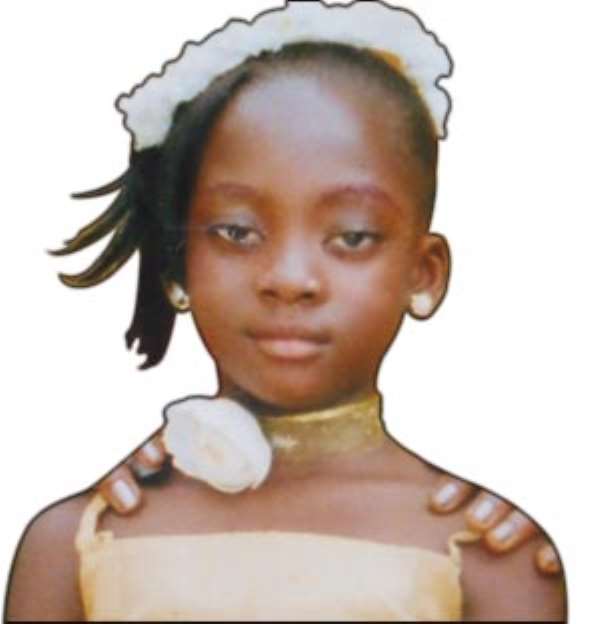 AN EIGHT-YEAR-OLD class three pupil of Patdorama International School in Kumasi has died as a result of the stomach complications she developed after being allegedly raped through the anus and vagina by a 16-year-old boy in the serene neighbourhood of Kwadaso Estate.

Emmanuella Opoku also known as Attaa, who had been hospitalized at the Komfo Anokye Teaching Hospital (KATH) where she was due for surgery to rectify a damaged fallopian tube, suddenly died on December 15, 2009.

The remains of the pretty little girl had since been interred whilst the alleged rapist, Nana Osei, a first-year student of Osei Kyeretwie Secondary School, is languishing in police cells after he was remanded for one week by the KMA Court last week.

Mother of the deceased, Mrs. Beatrice Antwi, amidst sobs, told DAILY GUIDE that a month ago, her daughter complained about severe stomach pains.

“My mother (Emmanuella's grandmother) conducted checks on her body and to her surprise realised that the little girl's anus had abnormally widened, so we questioned her.”

Mrs. Antwi, who is a seamstress by profession, disclosed that little Attaa finally told the family that her female friend's elder brother, Nana Osei, had had sex with her both in the vagina and anus.

She said the innocent girl claimed Nana Osei, on three different occasions, gave her a bluish-looking liquid to drink which instantly sent her to sleep whenever she visited their home which was close to her house at Kwadaso Estate.

Attaa said she did not see or feel anything after gulping the bluish-drink but would wake up from a deep slumber with ointments spread all over her anus area, Mrs. Antwi hinted pathetically.

She said young Attaa noted further that Nana Osei had warned her not to disclose the issue to anyone, not even her mother, allegedly adding he would not allow her into his house to play with his little sister again if she dared told anyone.

Alarmed by this revelation, Mrs. Anwti said she hurriedly reported the matter to the Suame police. Nana Osei was arrested and later granted a police inquiry bail after writing his statement.

She said she then rushed her daughter to the hospital where doctors confirmed that she had been raped both in the vagina and anus, which had damaged her fallopian tube.

According to the mother, she was sleeping beside her daughter on the dawn of December 15, 2009 in a ward at KATH awaiting surgery to rectify the girl's problems, “but to my dismay, she died suddenly”.

Mrs. Antwi said the police, upon learning about the sudden death of little Attaa, re-arrested Nana Osei who was subsequently arraigned and remanded for one week by the KMA Court.