WERE PIANIM AND ARTHUR KENNEDY WOLVES IN SHEEP'S SKINS? 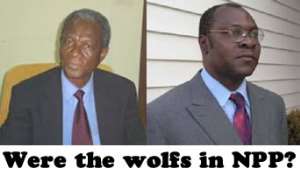 By their fruits ye shall know them. Now these people have turned new leaves to show their true characters, so you need not be surprised as recent revelations by the otherwise two very well respected persons of the NPP - Mr. Kwame Pianim and Dr. Kobina Arthur Kennedy, have equally thrown bombshellsindividual bomb -shells to the wind. As if the two gentlemen had some telepathy instincts; while the youngster tried to claim credit by launching his 'devilish' book entitled 'Chasing the Elephant to the Bush' that has brought about misgivings as to his credibility and/or loyalty to the Great Party, the septuagenarian Pianim also never got any other platform to launch his vitriolic attack on his own party than to vouch his 'satanic' testimony at the doorstep at the presidency – the Osu Castle, where His Excellency was the host and his dear friend, Pianim, whose presence at those particular times still have become a mystery, was the Guest of Honour. Did Kwame Pianim want to please his host with the firm promise of a ministerial or ambassadorial appointment in the near future by openly attesting to the incorruptibility of Prof. Mills no matter the ultimate consequences on two occasions? Meanwhile, the million-dollar question on the lips of all discerning persons is – what did he go to do at the Castle on those two occasions? Again, who were those he saw delivering the supposedly brown envelopes to his host that he personally declined, rejected, returned and cautioned the giver(s) to go and sin no more? By doing this cheap PR gimmick for the president should not spare him the big rod but land him at the CHRAG or the law courts. Mr. Pianim should never be allowed to open his mouth wide without being dragged to the courts because the president could be impeached for the loose talk from Pianim if Ghana were a developed country where civility and rule of law thrived. I dare say civility here because as at now, nothing has been heard of the Muntakagate Scandal which, as clear as crystal ice is, the BNI/ National Security had any business doing by covering up this scenario but to let the law take its own course.

By the recent disclosures these prominent personalities have tried to white-wash themselves or more literally, washed their dirty linen in public and dried it in the open but in vain, and in doing so, have rather dragged themselves to the gutter. Hear Pianim say to the host of an Accra radio station, 'Are you now a CID, or BNI officer to interview me today? If you are not any of these people then you better forget about that. When he realized that he was being pushed too much to the wall, and had no leeway for any escape chute, despite his academic laurels as an international economist bla, bla, bla, he tried to think fast by becoming angry with the interviewer but his trick didn't work to perfection. He must be ashamed with himself and must bow his head in shame and as a sign ofd conceding defeat. When Pianim inadvertently opened his mouth wide at the Castle either for fame or some sort as if possessed by the modern day goddess of the sun, he never knew there would be a day of reckoning to account for his reckless speech. The barrage of comments from the populace on air, the print and electronic are all clear pointer to the fact that they have been condemned to 'death by firing squad'. The good old book has indicated that by their fruits, ye shall know them. Genuinely, these persons demonstrated that they were wolves in sheep's skins who displayed humility and as a result, Pianim was generously appointed by ex-President Kufuor to the chair of the PURC while the latter-day saint and convert, Arthur Kennedy, was unexpectedly and unmeritoriously appointed as the Director of Communications of Nana Akufo Addo's campaign team for the 2008 'Second World War' between the NPP & NDC even though he obtained just one single vote out of the total 2,300 votes cast. Because they wanted to prove otherwise, they tried to interplay with the rank and file of the party members. Indeed, the overall members and supporters were lucky not to have been devoured by these deadly wolves that had infiltrated the camp of the NPP because vulnerable as most of us were, and knowing the lifestyle of wolves in particular, all of us would have become victims of their wicked undercurrent acts. We never had chance to examine them thoroughly until now.

TRAITOR OR REINCARNATED 'JUDAS ISCARIOT'
A traitor is a very trusted person who very often discreetly betrays his friend to a third party (for money, position or in kind) and behaves as if nothing had taken place on the quiet. On the other hand, such a person undermines his friend or boss to the extremes for no just cause and tries to wear a smiling face. In scriptures, we know of the very good friend of our Lord Jesus Christ, Judas Iscariot. Because he knew Jesus could save himself from arrest by the Roman soldiers if the worse came to the worst betrayed his boss for peanuts – just 30 pieces of silver and when he realized Jesus did not perform his usual miracle to save himself but in order to fulfill the age old prophecy concerning his death to all nations rather submitted himself as if he were a sheep prepared for the slaughter, (and since he held the keys and power over death, he knew he would resurrect on the third day). Judas, sensing danger,fled from the crowd and horrible scene to hang himself later. Many Ghanaians know the Arthur Kennedys of the late 70s and how he proved to be a critic of governments that did not practice democracy. But one may ask, is he the same person some of us knew? How and why did he decide to stay for as long as 30 years or more outside without thinking about his compatriots and the deplorable conditions we found ourselves in until he got wind that his mother party, the NPP had blown out the wind in the PNDC/NDC sail and was to elect a flag-bearer to contest the just ended congress of December 22, 2007 before he found it prudent to return home? Nana Akufo Addo should not have offered that prestigious and enviable position of Communications Director to him. Anyway, who knows? Having lost completely, one would have thought that he would re-examine himself first as to why his outfit failed in its bid to capture the enviable prize of the golden fleece, but went ahead to launch a book that has heightened tempers in the party and across the length and breadth of the country. Virtually, according to people who have read and digested this book in question, there is no mention of his inability to embark upon any meaningful suggestions re: communication skills to enable the party to have emerged victorious so for the learned medical doctor to drop his bombshell was like leading the British soldiers with knowledge in conven -tional warfare to march against the Ashantis and fight them in the bush. Like the jovial saying by the British soldiers, the white man brings his canoe to the forest but the forest was stronger than the canoe. The Ashantis were already traditional forest dwellers who were immune to malaria etc. so for the British to march up against them and engage in jungle warfare and still mindful of their health was akin to Kennedy's single vote that he obtained at the congress.

Unlike the advanced economies where most politicians stick to principles, this scenario seems to be a divergent view and lacking ingredient in certain parts of Africa where Ghana is no exception. Since our independence in March, 1957 there have been quite a number of politicians who have tried to align themselves with almost all the political parties or governments that have come to manage the affairs of this country. Even though some may have genuine intentions to be party to such governments; others who neither belong to the right, left, centre-right nor centre-left, would do everything to parade the corridors of power for consideration just to satisfy their stomachs thereby throwing their dignity to the dogs despite the harm such undignified stance might cause their future generation. A couple of dignified personalities such as the late Justice Nii Amaa Ollenu, Justice Samuel Azu Crabbe, Prof. Nana Siriboe, Brig. (Rtd.) Agyemfra, of the IEA and a few others ought to have their names written in gold when the history of Ghana is written about this generation and those 'greedy and hungry politicians be it military or civilian' whose stomachs very often dictated their destinies because they were unprincipled and more often than not could not adjust and adapt themselves under trying moments, swayed to wherever 'food' was always available for their fill. Such people were good organizers but not managers because morally, they were not upright and had to satisfy their selfish ends to the detriment of others who were more vulnerable. It is therefore not strange that Mr. Pianim could find himself a place and a befitting one as such with this category, just to sell his hard earned reputation, prestige, worldwide recognition and respect for this pittance.