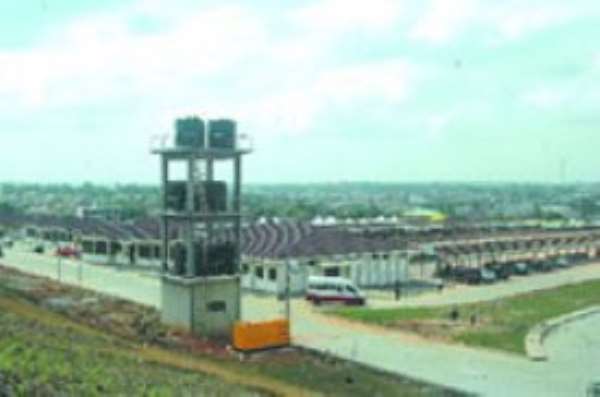 The much-awaited Achimota Transport Terminal designed to ease congestion on the Accra-Nsawam road was inaugurated yesterday, with the government pledging to develop a quality public transportation system.

With the inauguration of the terminal, all the tro-tros and taxis which had been using the shoulders of the Accra-Nsawam road as a parking lot are expected to leave the area.

In a speech read on his behalf, President John Evans Atta Mills said the government was in the process of developing a pilot bus rapid system to assist in the delivery of quality public transportation in the city of Accra.

The Chairman of the Council of State, Professor Kofi Awoonor, who read the President’s speech, cut the tape to inaugurate the terminal.

President Mills explained that the pilot bus rapid system was expected to facilitate the prudent management of the roads in the city, as well as ease traffic congestion, adding that the move was part of measures to improve the road network within the city in the next few years.

He stated that even though the government intended to expand the road network within the city, it was not necessarily the solution to easing the traffic congestion problem, as more often than not expanded roads tended to generate increased traffic and create more traffic congestion in the long term.

He said there was the need to incorporate a number of solutions that were used elsewhere, saying, “There may be a need to limit or even ban parking along a good number of the city’s streets and encourage pedestrian movement throughout the city, as well as use public transportation among as many of the city’s residents as possible.”

He said statistics showed that over 80 per cent of the travelling public in the cities used some form of public transport, adding that the establishment of the terminal was necessary to address the major challenge facing the public.

He said the continuation of the Achimota terminal project was in line with the government’s desire to curb intra-city traffic problems which resulted from traffic jams, excessive use of low occupancy vehicles, as well as the desire to combat indiscipline on the roads and increase efficiency in urban transportation.

President Mills said the terminal would help decongest the main road where the present Achimota lorry park was located.

The Minister of Roads and Highways, Mr Joe Gidisu, for his part, said the completion of the project would be a relief to motorists and passengers travelling to northern Ghana, as well as those on the Nsawam road who had been struggling through rush hours over the years.

He appealed to stakeholders to consider the terminal as one of their own assets and advised them to maintain the facility.

For his part, the Chief Executive of the Accra Metropolitan Assembly (AMA), Mr Alfred Vanderpuije, said all the lorry parks along the Accra-Nsawam road would be relocated to the new terminal.