Mayawati ji, why did we get bulldozers instead of homes? 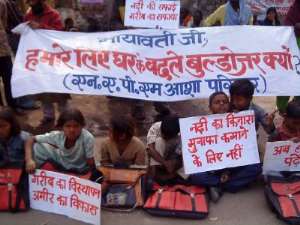 Anti-Dalit and Anti-poor action by a pro-dalit Government

On 19 February 2009, at the behest of Bahujan Samaj Party's Satish Chandra Mishra, the local administration came into swing to brutally demolish the slums in Nadwa (daliganj), Lucknow 216 poor people were rendered homeless despite of central government of India's and UP state government's promise to provide homes for the poor.

On 21 February 2009, in front of the state's legislative council (Vidhan Sabha), a massive dharna was held by those displaced and many people from the city participated to express their solidarity and concern on the houses of people getting demolished.

The authorities responded that under Gomti Action Plan to develop the banks of river Gomti, a private company has been contracted to do so. It is clear that the beneficiaries of this kind of 'development' will be private companies and the poor people will face bulldozers and displacement.

The activists of Asha Parivar and National Alliance of People's Movements (NAPM) vehemently opposed the ideology of this kind of anti-poor development.

The displaced people are questioning the state and central government policies of providing housing for the poor despite of which their houses were demolished brutally by bulldozers.

They are also questioning the insensitivity of officials to the plight of homeless poor people who without making any alternative arrangements of providing shelter to those displaced, went ahead with bulldozers to demolish the houses and belongings of the Nadwa slum residents.

At least two women, who were pregnant, had to face the ignominy of this demolition. Luckily one woman delivered twins at a hospital on 19 February 2009 despite of becoming homeless earlier on the same day, and the other, delivered a dead child on 21 February 2009.

The residents of Nadwa slums are mostly dalits and have been saving from their daily earnings to qualify for housing under Basic Services for Urban Poor (BSUP). But the local administration demolished the slums even when these alternative housing facilities are not yet ready to use. A government official said that at least these BSUP houses will not be ready for next 4 months.

The representatives of those displaced also met the Mayor Dr Dinesh Sharma to demand alternative housing for themselves. Sources said that the situation in Lucknow is quite gruesome - there are about 1,500 families displaced due to river-bank 'development' and only 400 of those will get the houses being constructed under BSUP scheme.

The question for the state's Chief Minister Mayawati who is a celebrated saviour of Dalits is that despite of her promises, state government's promises and central government's promises, why were these people made homeless in such a brutal way (bulldozing their houses) when alternative housing facilities were not ready?

Also the reason which the authorities have given of a private company being contracted to 'develop' the river bank of Gomti is ironical - after all, whose 'development' is it? Of the rich and the mighty who got the fat contracts to 'develop' river banks, or the poor people who were displaced due to this kind of 'development'?

(The author is a World Health Organization (WHO)'s WNTD Awardee (2008) and writes extensively on health and development. He can be contacted at: [email protected])