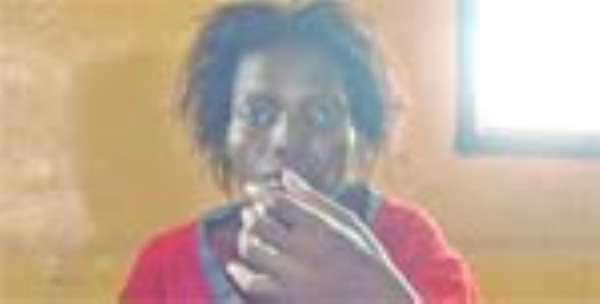 Regina Ofoe, a 35-year-old witch who said she was 'flying' to Italy to disrupt a purported marriage rite between her brother and his spouse, has been 'shot' down by the Holy Spirit.

She crash-landed naked on someone's sofa, on the second floor of a storey building at Madina Ritz Junction, near Accra yesterday.

The shouts from Amponsah Boateng, in whose room the woman had found herself, attracted a large crowd of curious neighbours who hurriedly thronged the area to catch a glimpse of the alleged crash-landing witch.

According to Mr. Boateng, the woman had confessed to him that she was flying to Italy via 'Drobo Airlines' (spiritually) but suddenly at the Ritz Junction, a Holy Cross hit her in the face 'pam!' and she fell down, miraculously landing on the sofa in his room.

When the news report got to the Madina Police Station, the District Commander, Chief Superintendent Paul Ayitey quickly dispatched Detective Corporal Georgina Nkansah to rescue the said witch from any harassment.

She was offered some clothes by sympathizers to cover her nakedness.

When DAILY GUIDE got to the Madina Police Station, Regina, the alleged witch, was taking a nap behind the counter. She had long finger nails which were painted red, and she looked confused, tired and her hair disheveled.

She gladly gave DAILY GUIDE her name and without hesitation granted an interview.

Speaking Twi, she said she had worked as a “soldier, policewoman, footballer and all the professions in the world”.

Regina sounded incoherent and inconsistent with her narration as she kept saying she was a witch and then changed her mind. At a point said she was an emissary of the Holy Spirit sent to destroy the Devil and his cohorts.

According to her, she was going to be married to one Melon from Togo but it looked like her family members, led by her father, were spiritually thwarting the marriage.

She named her father as 'Ogidigidi, wo Domeabra' and others that sounded more of appellations than mere names.

Regina alleged that her father was the chief wizard who gave her some powers to cause mischief.

She said with the connivance of her father, she was able to cast a spell on her younger sister, Rejoice, a successful lawyer, making her lose her dignity and respect. She added that she had taken the virtues of the lawyer and dumped them into what she called “dirty oil”.

Speaking to DAILY GUIDE, C/Supt. Ayitey said the Police would be investigating Regina for a case of unlawful entry and trespassing.

He alluded to the fact that Regina had been incoherent and inconsistent in her answers to questions posed by the police.

C/Supt. Ayitey indicated that she would be sent to court where the next line of action would be determined, especially psychiatry observations.

He appealed to the public to help find the relatives of Regina, who are said to be living in Nungua, Ada and other parts of Accra.

At the time of leaving the police station Regina was served with hot kenkey, shito and fried fish by the police, which she wolfed down hungrily.