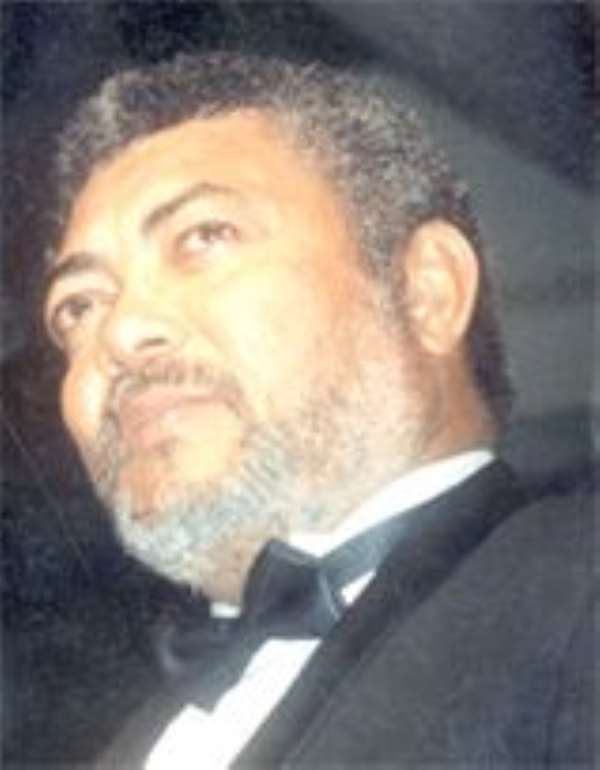 Ex-President J.J. Rawlings yesterday waded deep into the Anlo chieftaincy affair and accused the government of creating the bloody disturbances which characterised the installation of Francis Nyonyo Agboada as the Awoamefia of the area.

“There are no factions in Anlo land; it is the New Patriotic Party (NPP) government which is rising against the people of the Anlo State,” he said.

He was addressing a rally at Akatsi to outdoor new membership cards for the Ave-Avenor Constituency of the National Democratic Congress (NDC).

The former President described the recent happenings in Anlo as “the most primitive thing” of the century.
He accused President J.A. Kufuor of being the brain behind the mayhem at Anloga recently, saying it was an illegal act by the Kufuor administration to install someone who was nowhere near the stool.

He described it as an attempt to “desecrate the spirituality of the stool”. On the 2008 general election, he entreated party faithful not to think that there was going to be any free or fair election, saying it was incumbent on them to work hard and remain vigilant for the NDC to win the elections.

He charged them to be careful in their choice of candidates to stand on the parliamentary tickets of the party and said they must choose people who were capable of winning the elections decisively.

Mr Rawlings warned that because the NPP knew that it would not win next year's elections, it had planned to resort to violence as a means of holding on to power.

He said in the 2000 elections, the NPP did not have any money but it succeeded in winning the elections through lies, deceit and “the pollution of the people's minds”.

In 2004, he said, the NPP was aware that the NDC was going to win the elections by 70 per cent and it, therefore, resorted to all fraudulent means to rig the elections.

The only way for the party to be well placed to fight towards returning to power in the 2008 elections, he said, was through proper resourcing of the party and called on members of the NDC to be committed to the payment of their party dues.

He reminded them that the party belonged to them and that they should not allow anyone to take it away from them.
He called on the people to remain resolute in the face of the recent disturbances.

“If we lose our integrity, we will fail to protect this country from fraudsters and dubious characters,” he said.
Mr Rawlings said the government had succeeded in corrupting the police and the military and was now shifting its attention to the chieftaincy institution.

He said that the chieftaincy institution was the embodiment of the souls of the people of Anlo, adding that the government, therefore, could not use the police and the military to illegally install a chief for the people of Anlo or anywhere in the country.

On the recent pronouncement by the former Minister of Defence, Mr Kwame Addo-Kufuor, that he (Rawlings) had no vision, he said the police and the military he left behind were of high integrity and would not have allowed the recent disturbances in Anlo land to take place.

“I'm a retired soldier and I know what is going on now,” he said. Earlier, the Volta Regional Chairman of the NDC, Mr Modestus Ahiable, had called on the government to heed calls to set up of an independent judicial committee to bring out the truth in what occurred at Anloga on Thursday, November 1, 2007 when the youth of Anlo clashed with the police over attempts to install Francis Agboada as the Awoamefia of the Anlo Traditional Area.

The clashes led to the death of three civilians and a police constable. One other person, who was arrested as a suspect, later died in police cells.

He said the Anlo Kingdom was indomitable and that no government or person would succeed in subverting it.
Mr Ahiable assured the teeming supporters of the NDC who patronised the rally that God had not forgotten about them and that with hard work and industry, they would take over the reins of power in 2008.

For his part, the Member of Parliament (MP) for the Ave-Avenor Constituency, Mr Edward Doe Adjaho, reiterated calls by independent bodies for the removal of Mr Bernard Dery as the Police Commander in charge of the Volta Region.

He also made remarks regarding the “hell” they went through in securing police permit to go ahead with the rally because the NPP had also planned a counter rally.

Mr Adjaho called on members of the NDC to endeavour to win members of the NPP who had become disillusioned by their party's policies and programmes into the NDC because the NDC stood for all and the truth.