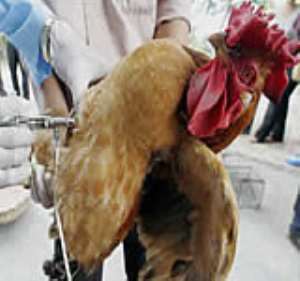 Over GH¢8,800 (¢88 million) was on Friday paid as compensation to three poultry farmers whose birds and farm implements were destroyed as a result of the outbreak of the Avian Influenza or bird flu on their farms at Asuokwa, near Sunyani.

Mr. Damalie, on whose farm the disease was first detected, expressed disappointment about his amount, saying he was not compensated for 170 layers that he had earlier destroyed.

He said the officers said compensation would only be paid for birds they had destroyed but added that when he first detected symptoms of the disease on the farm, he reported to the veterinary officers who sent samples to Accra for confirmation.

Mr. Damalie said the report from Accra took a week and by the time the confirmation came, 170 birds had died.

"I should have been compensated for these birds because the order for their destruction came from them", he said, adding if he had not reported, the situation would have aggravated and its combat would have been more difficult.

Mr. Charles Ghanney, Acting Sunyani Municipal Veterinary Officer, said the compensation was 'a fair deal' for which the farmers should be satisfied with since the government paid for birds that veterinary officers had destroyed.

He said the panic about the disease had diminished as the situation had been brought under control.

Mr. Ghanney advised farmers and residents to continue monitoring events and to quickly report anything unusual on their farms or homes to the veterinary office.

A total of 1,965 birds were destroyed on the three farms during the outbreak of the flu, whilst more than 500 local poultry suffered the same fate last May.