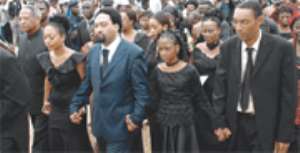 A solemn but colourful ceremony at the forecourt of the State House in Accra yesterday brought to full circle a marriage consummated in the name of African unity.

It was a state function to provide a place of eternal rest for the late Madam Fathia Nkrumah, wife of the late Osagyefo Dr Kwame Nkrumah, Ghana's first President, but in the mass sorrow many of the tributes evoked memories of 50 years ago when the union between the Ghanaian President and the Egyptian beauty was hailed as a physical manifestation of continental unity.

It also earned fulfilment for Madam Fathia and her life-time wish to be laid beside her husband who preceded her to the other world in April 1972.

In attendance were hundreds of people from all walks of life, including President J.A. Kufuor and his wife, Theresa, the Vice-President, Alhaji Aliu Mahama, and his spouse, Hajia Ramatu Mahama.

Madam Fathia's journey, as if by coincidence, begun in the year in which Ghana, her beloved country, celebrated its 50th anniversary of independence. It also coincided with the 58th anniversary of the founding of the CPP by Dr Kwame Nkrumah.

President Kufuor, in a tribute, reiterated that the government would honour all those who contributed immensely to the development of the country, irrespective of their political and ethnic affiliations.

He said the place of Madam Fathia, like that of her husband, Dr Nkrumah, would remain secure in the country's history.

That appeared to be a reaction to a statement by Dr Gamel Nkrumah, a son of the late Madam Fathia, that “this is a year in which Kwame Nkrumah's name and memory have resurfaced on many occasions as a constant reminder of the continent's great history in resisting foreign domination”.

“Her name will always evoke memories,” President Kufuor said. He recalled that the government, as a gesture of reconciliation and proof of unity, restored Madam Fathia's Diplomatic passport, with the hope that she could participate in activities marking the 50th anniversary of Ghana's independence.

President Kufuor conveyed his deepest sorrow to the children and families of Madam Fathia and Dr Nkrumah.

Dr Gamel Nkrumah, who read a tribute on behalf of the children, traced events from the 1966 coup through life thereafter and the vital role of Madam Fathia in their upbringing.

“Today, she returns for the fourth time to be buried in one of the most vibrant democracies on the continent. The democratically-elected government of President Kufuor so kindly and dutifully footed the bill for her medical treatment in Egypt. That is a gesture that we as her family will never forget.

“As it happens, and as a sign of changing times, it was the government of President Kufuor, regarded by some as the traditional rival of the Nkrumaist socialist ideology, which now accords her a state funeral and the opportunity to be rightly buried next to her husband on this sacred ground,” he said.

Dr Nkrumah recounted the experiences of the children at the Flagstaff House during the February 1966 coup and the reactions of Madam Fathia.

“Even if they fire at you, the bullets will not hurt you. Nothing will harm you,'” Gamel recalled what their mother said, while trying desperately to call the Egyptian Embassy in Accra to go to their aid.

He expressed appreciation to the government for renovating the Flagstaff House.

Mr J. R. D. Cobinnah, who read a tribute on behalf of the the Nzema Manle Council, prayed that the death and burial of Madam Fathia should re-unite Ghana as one people with a common destiny.

“'Let us put aside petty political controversy and intrigues and lay a firm and stable foundation for the political structure for Ghana. May your thoughts, your deeds and your prayers stengthen and sustain the statesmanship of the nation,'” he quoted Dr Nkrumah as part of the tribute.

expressed the hope that the government would continue to support Dr Nkrumah's children.

The General Secretary of the CPP, Professor Nii Noi Dowuona, described Madam Fathia as “a gallant woman who fought a good fight, finished the race and kept the faith and good reputation”.

He urged Ghanaians, especially women, to take inspiration from Madam Fathia's sacrifices, saying that her courage and fortitude would continue to inspire Ghanaian and African women to greater achievements for many years.

Fathiya (Fathia) Halim Rizk (her maiden name) was born in Cairo in 1932 and grew up in the suburb of Zeitun. Dr Nkrumah married Fathia on the evening of her arrival in Ghana on New Year's eve, 1957.

The mortal remains of the first First Lady were later laid to rest at the Kwame Nkrumah Mausoleum in Accra, with a large crowd of people from all walks of life in attendance to pay their last respects.

At 12.10 p.m. the funeral cortege, led by the family of the late Madam Fathia, entered the mausoleum, with officers of the Ghana Air Force carrying the casket containing the body of the First Lady.

The casket, which was drapped in the national colours of Ghana, was then placed in front of a statue of her late husband.

Members of the family, as well as some dignitaries and some CPP activists present, took their seats, while the Tema Youth Choir and other musical groups present provided music.

The pall-bearers were then called upon to carry the casket to where the late first President was interred and Madam Fathia was laid to rest beside her husband.

Reopening Of Schools: Not Testing Students, Staff Dangerous,...
53 minutes ago