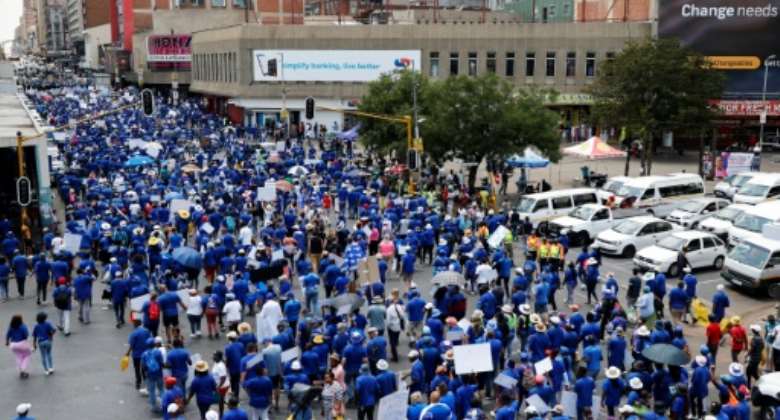 Several thousands of people took to the streets in South Africa on Wednesday to protest a prolonged energy crisis that has resulted in crippling power cuts for the continent's most industrialised economy.

Protests took place at various locations nationwide, including the financial hub Johannesburg and the seat of Parliament, Cape Town.

In Johannesburg, an estimated 2,000 to 3,000 demonstrators marched on the headquarters of the African National Congress (ANC) party, which has been in power for almost three decades and is blamed by opposition parties for the crisis.

The protesters were mostly dressed in blue, the colour of the Democratic Alliance, the largest opposition group, which organised the rallies.

Some held signs reading "Enough is enough", "Power to the people" and "Load shedding is killing jobs" -- a reference to scheduled power cuts for some clients or areas to reduce strain on the electricity grid.

The scheduled blackouts have burdened Africa's most advanced economy for years, with the network operated by the debt-laden state energy firm Eskom failing to keep pace with demand as it struggles to maintain its ageing coal-powered infrastructure.

But the outages have reached new extremes over the past 12 months, with power often being cut several times a day for around 12 hours in total.

"We are close to the breaking point, and communities across the country have run out of patience," DA leader John Steenhuisen told the protesters, describing the ANC headquarters as the "ground zero of our electricity crisis".

A strong police presence prevented protesters from reaching the ANC buidling, where a few hundred party supporters had gathered for a counter-demonstration.

"The ANC is committed to fix the electricity crisis and things are being done. It will take time but ultimately the problem will be solved," said ANC lawmaker Collen Thlologelo Malatji, 29.

In Cape Town, around 1,500 protesters marched past a few hundred ANC supporters.

"The government must take its head out of the sand and actually deal with the energy crisis," Cape Town's mayor, Geordin Hill-Lewis of the DA, told AFP.

The outages cost the country up to hundreds of millions of dollars in lost output daily from the disruptions to commerce and industry, according to the opposition estimates.

A 40-year-old poultry entrepreneur, Lloyd Peltier, said he had been forced to shutter four shops and lay off 20 workers. "All this because I can't run my business because of load shedding," he said.

An agricultural industry body said this week dairy farms were unable to keep milk refrigerated because of the blackouts.

"Food is rotten in our fridges. What is the ANC doing?" asked school employee Mpana Hlasa, 35.

Many also denounced the recent approval of a steep energy tariff increase that Eskom, which generates more than 90 percent of South Africa's energy, says is vital for its finances.

President Cyril Ramaphosa said this week that it was "understandable" people were "fed up" at the crisis, which was wreaking "havoc" on the country, but warned it could not be fixed "overnight".

He also said he had asked Eskom to consider pausing the tariff hike, adding that the government was looking to import electricity from neighbouring countries and increase output from renewable energy sources.