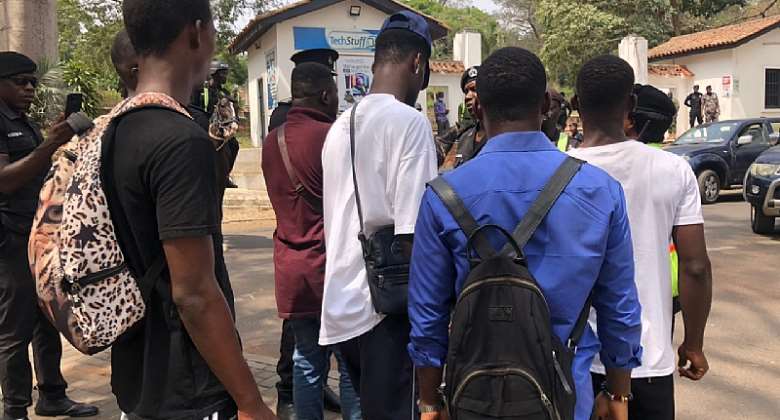 Some continuing students of the University of Ghana (UG), have been left stranded on campus following the recent university’s new residential policy.

On Monday, January 16, 2023, some affected students of Commonwealth hall numbering about 40 were turned away by security personnel of the school from accessing their hall.

The new directive to reassign continuing students of Commonwealth and Mensah Sarbah halls to other halls comes on the back of numerous clashes recorded between the respective halls in times past.

Speaking to Citi News, some of the stranded students called on the UG management to listen to their plea, as the other arranged accommodation is way too high for them to afford.

A level 300 student, Fred Oppong said, “I don’t have any relatives in Accra, so if I’m not being permitted to enter the hall, the best I can do is to loiter around till daybreak. I assumed the management will go by the court’s injunction, but the situation is different looking at the situation”.

Background
Per the new residential policy, continuing students are supposed to occupy other halls apart from the Commonwealth and Mensah Sarbah halls to make way for level 100 and graduate students.

In the case of Mensah Sarbah hall, only the male continuing students will exit.

There was heavy security presence on campus on January 12, 2023, as the students returned to campus.

Some continuing students of the Commonwealth hall were stranded over the policy.

Some students of the Commonwealth hall secured an interlocutory injunction on January 6, 2023, restraining the management of UG from implementing the residential policy decision but some of the students accused the management of the university of turning a blind eye to the court order.

Asked by host of Eyewitness News, Umaru Sanda, on January 12, 2023, if the UG disregarded the interlocutory injunction, the Senior Assistant Registrar at UG, Madam Pascaline Songsore pointed out, “no, we have said time and again in the notice released on January 11, 2023, that those residents in the halls were assigned to the halls before the injunction came”.

“We made it clear in the notice that, we are not going against the injunction. The issuance of halls to level 100 students has ceased till we have the injunction time run out. Our lawyers are working on that, so there is no flouting of anything [injunction] at this stage. The rooms were occupied before the injunction came”.