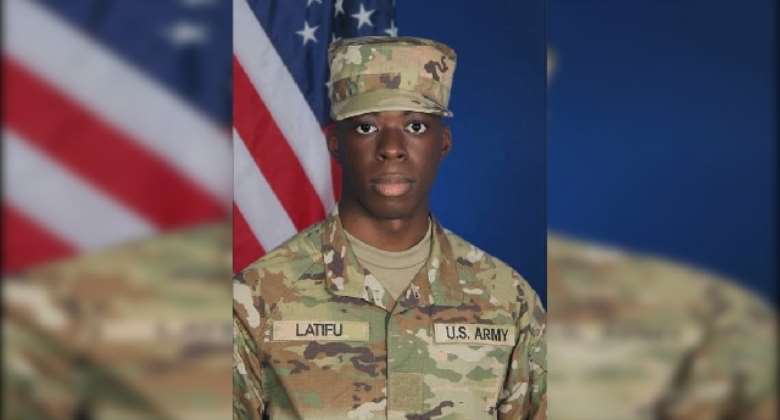 A Ghanaian-American family based in the US is mourning the passing of their son who died at a military base in Alabama.

The news has left the family and close friends of the deceased soldier in trauma and shock.

According to the military, the 21-year-old soldier, Pvt. Abdul-Nafsu Latifu was killed in an “altercation with another soldier” at the Alabama Army post, Fort Rucker, where he was training to become an Army air traffic control operator.

A source revealed that news about his demise was published on local websites in Alabama as early as 11:30 am CST, even though his next-of-kin was officially called four hours later to report that he had been hospitalised and in critical condition.

Pvt. Abdul N. Latifu, until joining the US Army, lived in New York.

He is described as very smart and respectful by all who have encountered him.

As relatives, friends and neighbours visit his New York home to mourn with the family, eulogies and questions continue to pour in.

“He was full of life and one of the smartest lads I’ve come across”, a neighbour said. “I cannot seem to comprehend this news because Latifu will not fight anyone for any reason, at best he walks away. So, I’m dumbfounded, to say the least”, another maintained.

“Something is not right about this; someone needs to start saying what really happened, not what they’re feeding us, what are they covering up?” a teary friend of the deceased lamented in disbelief.

Preliminary comments from Jimmie Cummings, a Fort Rucker Public Information Officer, only speak to events surrounding the hospitalisation of the deceased following injuries sustained during the supposed altercation.

The communication also suggested the detention of another soldier involved in the incident but falls short of identifying him or her.

The alleged attacker is said to have used an Army-issued steel folding shovel in the assault that caused Pvt. Latifu his life.

A follow-up statement issued by the U.S. Army Aviation Center of Excellence and Fort Rucker said no formal charges have been filed, but Army Criminal Investigation Division agents are probing the incident.

Maj. Gen. Michael McCurry, the commander of Fort Rucker stated, “On behalf of the U.S. Army Aviation Center of Excellence and Fort Rucker, I extend our deepest condolences to Pvt. Latifu's family, friends and community,” McCurry said in a statement. “Together we mourn the loss of a promising young soldier.”

Pvt. Latifu was a trainee in the Army’s Advanced Individual Training programme at Fort Rucker where he was assigned to the 1st Battalion, 13th Aviation Regiment, 1st Aviation Brigade.

Loved ones and close friends of the murdered soldier say the communication from the military smacks of a seeming cover-up. It is unclear how far investigations have gone in the murder of the 21-year-old son, brother, uncle and promising soldier, but the army maintains it is conclusively probing the matter.