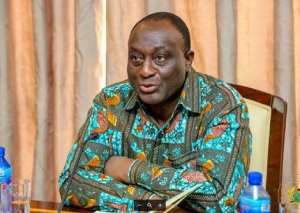 A while ago, outgoing Minister of Trade and Industry of Ghana, Hon. Alan Kyeremanten announced to the world his intention to contest for the flagbearer position of the New Patriotic Party (NPP) when the party opens nominations.

I must say at the outset that, Alan is one of the politicians l have a great deal of respect for and so l shall be duly guided in this writeup.

Indeed, his declaration did not come as a surprise to many given the fact that he has contested in previous presidential primaries. It is a notorious fact that Alan contested and lost to Nana Akufo-Addo on three different occasions -- 2007, 2010 and 2014.

His first attempt was quite satisfactory having garnered over 30% of the popular votes. Unfortunately, he lost the goodwill after his infamous resignation from the NPP, resulting in drastic reduction of his votes in subsequent primaries. His performance in the 2014 primaries was catastrophic. He obtained less than 6% of the total valid votes. That's how unpopular he has/had become.

Fast forward, l listened attentively to his public address tonight, and l find some of his pronouncements contradictory and unfortunate. Knowing how experienced he is, one would have expected that he did not venture into those political minefields. Unfortunately, he tripped!

In his speech, Alan, in one breadth says President Akufo-Addo's government has laid a strong foundation, which, when he's voted as NPP flagbearer and later President of Ghana, he will build on to ensure progress. In another breadth, he says Ghana, as it stands now has been reduced to what he calls "NATO" - No Action, Talk Only.

It's needless to say that is an attack on President Akufo-Addo and the government he's been part of since 2017. Since when did Alan realize that Ghana has been reduced to "no action, talk only?" Is he suggesting this government only talks and does nothing? In fact, he's armed our opponents with political weapons to unleash on us come the main elections.

As if that is not enough, Alan also says that should he get the opportunity to serve, he, just like Mahama has publicly stated, will downsize his government by merging some ministries, departments and agencies. If this is not a swipe at President Akufo-Addo, what else can it be? He's just played the ball into the hands of our main opponents.

The straw that broke the camel's back was his proverbial claim of "Akyea nanso enbuyɛ", to wit, "it's crooked, not broken." Is Alan by that expression telling us that President Akufo-Addo's government has disappointed Ghanaians, and that when he gets the nod will turn things around? Is that so? Gracious me!

Don't be surprised when you wake up to newspaper headlines like, "Alan Kyeremanten agrees with Mahama as he takes a swipe at President Akufo-Addo over bloated government."

Folks, l am left wondering what exactly Alan wants to achieve with these talks? I'm saddened; however, l take consolation in the fact that NPP delegates have resolved to elect Dr. Bawumia as the next flagbearer and President of Ghana.