The paradox of the Brain Drain: A blessing in disguise? 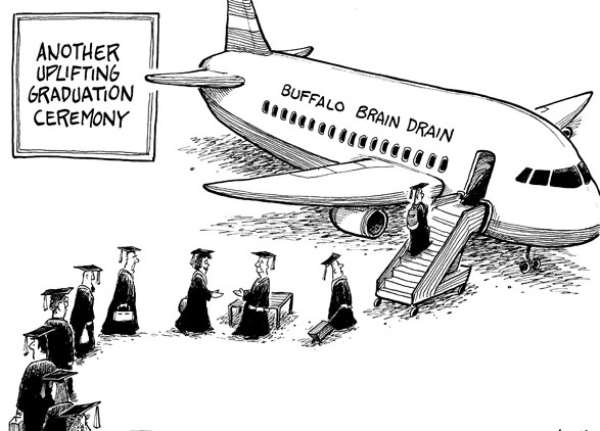 Ghana's power and strength cannot base on its dependence on remittances from abroad but, on its human resources. However, its human resources need to be 'developed 'in order to support the country. Until that time, I think it's better a Brain Drain than a Brain in the Drain because idle hands make for angry People.

Quick, name one thing that you cannot say in public in Ghana if you are a 'burger'? These days, talking about the Ghanaian Migrants' remittances and their role in the Ghanaian economy can get you in trouble .This is not one of the most comfortable topics to discuss in public, period. But, now that the government and the World Bank are talking about the significance of the remittances in Ghanaian economy , I think that I am immunized against any public prosecution or boos . I guess there will be no wahala. No be so?

According to March 20th 2006 edition of the Ghanaweb, a forum was organized in Ghana to discuss or debate and figure out a way to get more dividends out of the remittances from the Ghanaians abroad. I guess the Taxation proposal is suspended for the time being.

With that in mind, my question is this: when is the government going to form a mutual partnership with the Ghanaian Migrants and formulate a system that could improve relationship ?. I'm talking about a workable system which could benefit both the Migrants and the nation.

In this internet age, an indigenous system could be developed to have the remittances sent through a Web-Banking system. With such a system in place the residents abroad could send money, then the recipient in Ghana would be issued a card(a bank card) so as to allow that individual access to the account virtually any where in Ghana . The recipient could also make withdrawals at automatic teller machines (ATM's) around the country. The money we pay to the Money Grams, Vigos, Western Unions and other money transfer establishments could be then channeled into other development projects.

However, I do not think anything would be done about this. Nothing would be done because a lot of people think that the money the Ghanaian migrants send home is just meant to bridge the gap between the standard of living of the family members of the residents abroad and the beneficiaries living in the home country. Therefore, since the money does not go directly to the government, its effect is very minimum on the main economy. I beg your pardon? Do not tell me that a healthy citizenry coupled with a better living standard, with access to easily available funds to start a small business, put up housing, buy medication or finance a family member's educational bills are not part of the socioeconomic equation. We are talking about remittances which infuse millions, if not billions of dollars yearly into the Ghanaian economy. And, that's nothing to sneeze at.

To highlight the other dimension of the migration trend, Mr. Adomako stated in his article,( published on the Ghanaweb, sept 6th 2006), that the “major part of the remittances goes into organizing expensive funerals back home”. Therefore, he called for the “Ghanaians abroad to channel their monies into businesses and other activities that would create employment and cause our GDP to grow”. This means that ( if that is true)spending money on caskets, drinks ,hotels, Disc jockeys,, food, transportation and other services for the funerals do not oil the local economy. I guess the tons of money parents spend on the High school graduation celebrations in America; we see every year does not add anything to the economy, huh? I don not have advanced knowledge in economics, but my secondary school economic teacher taught me.

Do not get me wrong, I do not support the time and energy we expend on the dead in our society. And, there is no doubt that the money we spend on funerals could be channeled into something better like: sponsoring a member of the deceased's family into apprenticeship program or a trade school or giving a scholarship in honor of the deceased. But, trying to devalue the role the remittances play in the Ghanaian economy is very ridiculous.

The Brain Drain Has Good Attributes:

Thank God that Ghana has its share of the Brain Drain phenomenon. Ooops! Relax and hold on to your seat belt. I'm not trying to start a national war here. But, go ahead and call names. Come on; get it off from your chest. Are you okay? Now, given all the Ghanaian professionals who have left the country, where would they find jobs if they were still in Ghana? And, once there are no jobs for them at home they could be easily engaged in other social vices ,which does not contribute anything to the growth of the Ghanaian economy Do not forget that an idle hand makes an angry man .If you do not believe me look at Nigeria. And, do not tell me that if they had stayed home, they could have created jobs because our system does not support entrepreneurship and creative thinking which the engines of job creation are.

If you can't beat them join them:

Have you applied for a Ghanaian visa or a dual-citizenship lately? Now, since the government is not willing to do anything aggressively, to retain or attract our professionals in the Diaspora and it can not prevent the Ghanaians from looking for a Greener Pasture elsewhere, it has one choice: Get the dividend from the Brain Drain. There should be a partnership with the Ghanaians in the Diaspora and find out the best way they could contribute physically, economically and socially to the growth of the home country. For a start, I suggest a yearly SUMMIT in Ghana which should be attended by the government officials in power and Ghanaians living abroad, who could afford. .

Where and How are we going?

There should be a well-defined Blue Print as to where the government wants to take us. Once that is done, arrangements could be made to utilize the professionals living abroad. Some of them could volunteer their services and time at the NATIONAL EMPOWERMENT TRAINING ACADEMY (refer back to previous article) when they come home on vacation. This writer is ready to offer a pro bono IN-SERVICE TRAINING to the officers of GHANA POLICE SERVICE and PRISONS. You see, I'm putting my mouth where my heart is. I'm not the only one. A lot of people are willing to contribute to the Ghana's well-being but, there is no one back home, to give them a platform . So unless something is done to attract and retain the Ghanaians in the Diaspora ,all we can do right now is to send absentee dollar remittances.

Only our Remittances are needed:

Are we ready to come home? You bet !. Is the government ready for us? Hell no ! Because we can not eat an empty rhetoric and raw philosophy. Do you need more proof? How long does it take you to clear your shipment from the harbor ? And, have you tried to register a company in Ghana? What about the papers on your land? You need to take two days off from your work just to get a Ghanaian visa in New York. The list is long, but I guess you get my point. The policy makers are not doing anything to attract Ghanaians in the Diaspora , and I wonder if they are doing that by design or ignorance .The Brain Drain is only a curse if we do not make use of it. It seems, as long as the absentee dollar remittances are pouring in there is no cause for alarm. So they think. And, to those who say that nations are built with brains, but not with absentee dollar remittances, they should also teach our policy makers how to create a user-friendly economic ecology which could retain the brains.