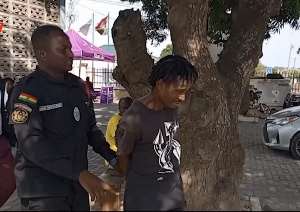 A Teshie Magistrate Court has remanded a 35-year-old Nigerian national into prison custody for beheading an a sex worker at Spintex.

The accused, Daniel Dennis, during a court hearing on Thursday, said that he killed his victim in self-defence.

The court also heard that the woman who has since been identified as Vivian allegedly got into a fight with the accused person after he prevented her from smoking weed in his room at Spintex.

The accused person was picked up by the Police after his landlord discovered a dismembered body inside his locked room.