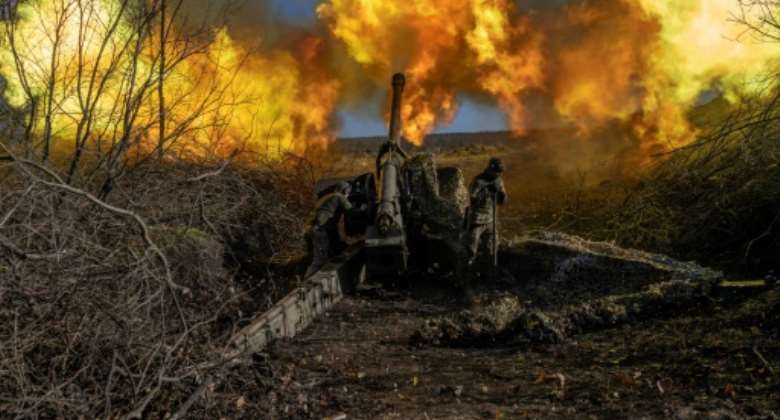 A Ukrainian soldier fires artillery towards Russian positions outside Bakhmut on November 8, 2022, amid the Russian invasion of Ukraine. By BULENT KILIC (AFP)

The Ukraine war has shown the heavy toll military conflict takes not just on people but also on the planet, say experts at the UN climate summit in Egypt.

From the emissions caused by diesel-powered tanks, fighter jets and missile blasts to urban and forest fires and massive waves of refugees, the conflict has also spewed out huge amounts of greenhouse gases.

"This is a field of significant emissions and nobody has really dealt with this problem," said Axel Michaelowa, head of the University of Zurich's International Climate Policy research group.

Russia's invasion has plunged Ukraine into misery, heightened geopolitical tensions, driven up global energy and food prices and distracted the world community from the urgent need for climate action.

A fast-heating world "cannot afford a single gunshot", Ukrainian President Volodymyr Zelensky told the COP27, arguing that the aggressors "are destroying the world's ability to work united for a common goal".

But, aside from such massive global shockwaves, the actual carbon footprint of war -- and of peacetime armies -- is also enormous, experts have argued, while acknowledging that so far they lack precise data.

Estimates of planet-warming emissions from the world's militaries range between one and five percent of the global total, according to a commentary published in the journal Nature last week.

That can be compared to shipping or aviation -- both around two percent, according to the paper led by researchers in Britain.

US soldiers participate in a South Korea-US joint military exercise on October 19, 2022. If the US military, the world's biggest by expenditure, were a country, it would have the world's highest per capita emissions. By Jung Yeon-je (AFP/File)

If the US military, the world's biggest by expenditure, were a country, it would have the world's highest per capita emissions, at 42 tonnes of CO2 equivalent per member of its personnel.

When one of its F-35 fighter planes flies 100 nautical miles, it hurls into the atmosphere as much CO2 as the average British petrol car does in a year, the experts wrote.

'Conflicts past and present'

Black smoke billows from a fire on the Kerch bridge that links Crimea to Russia, after a truck exploded, near Kerch, on October 8, 2022. By - (AFP/File)

Ukraine has started to calculate emissions linked directly and indirectly to the invasion launched by Russia on February 24, a first for a country at war.

Fires in buildings, forests and fields sent into the skies 23.8 million tonnes of CO2 equivalent, and the fighting itself 8.9 million tonnes, according to the project called the Initiative on GHG Accounting of War.

The displacement of people caused 1.4 million tonnes, said the project created two months into the war, while reconstruction of destroyed infrastructure will cause another 48.7 million tonnes of carbon emissions.

The total comes to nearly 83 million tonnes as a direct consequence of the war, now in its eighth month -- compared to around 100 million tonnes produced from all sources by the Netherlands over the same period, according to the initiative.

Plumes of smoke rise during a reported Russian bombing in Syria near the village of Hafsarja, in the rebel-held Idlib region, on September 8, 2022. By Abdulaziz KETAZ (AFP/File)

"It shows us how much we are missing from other conflicts past and present," said Deborah Burton, co-founder of the group Tipping Point North South. "We have not had this level of detail on Iraq or Syria or other conflicts."

The authors of the Nature commentary argued it is high time to address the issue.

"Why are reports from the Intergovernmental Panel on Climate Change and United Nations climate summits silent on military emissions?" they wrote.

"The short answer is politics, and a lack of expertise."

A structure on fire after shelling in the town of Bakhmut, in eastern Ukraine's Donbas region, on October 23, 2022, amid Russia's military invasion of Ukraine. By Dimitar DILKOFF (AFP)

Ukraine's project aims to remedy this "sort of blind spot" in the calculation of global emissions, said Lennard de Klerk, a private-sector specialist on carbon emissions who took part in the initiative.

The experts of the Nature commentary hope the COP27 and next year's climate conference in Dubai will bring "opportunities to formalise this change".

"The best step in our view would be to actually bring this directly to the IPCC process," Michaelowa told AFP.

"The challenge is that military data are usually kept confidential, but there are possibilities to actually find proxies.

Black smoke rises near Slovianska power station in the Donetsk region on October 13, 2022, amid the Russian invasion of Ukraine. By Yasuyoshi CHIBA (AFP/File)

"You know which aircraft are operating in which area, you have an idea of the emission intensity of certain types of vehicles," explained Michaelowa.

"So, by using proxy data, you should be able to have estimates of military emissions that are at least accurate in the level of plus or minus 10-20 percent."

The Nature authors argued that carbon emissions "must be officially recognised and accurately reported in national inventories, and military operations need to be decarbonised".

"Military emissions need to be put on the global agenda."