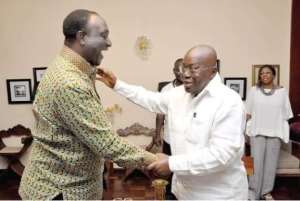 There's been growing calls on Hon. Alan Kwadwo Kyerematen to resign from the President Akufo-Addo government. I find such calls to be a democratic expression of opinions yet improper.

The resignation of the man widely known as Alan Cash from the crisis-hit Akufo-Addo led NPP government would be disastrous to his own political fortunes, considering that he's a strong personality tagged to lead the NPP to break the eight in 2024.

It is worth noting that he's been part of this government since 7th January, 2017. If there's been any mess today that requires a clean up, he should be part of the cleanup exercise to clear the mess. Undoubtedly, the country is in crisis except for those who are parochially partisan to accept that we're indeed in a crisis.

Notwithstanding the current economic situation we find ourselves in, I form part of the Ghanaian optimists who still hold onto the believe that this government would take us out of the crisis. A failure to take us out would mean that Vice President Mahamudu Bawumia, Agric Minister Owusu Afriyie Akoto and Trade Minister Alan Kwadwo Kyerematen (all of the Economic Management Team) would have been failures; none fit to lead the party as flag bearer.

Any member of the current Economic Management Team cannot be left out whilst counting the companions of the team which couldn't salvage the country from the crisis we face today. History shall duly write their names down for reference.

This crisis is a test case for them to prove to the New Patriotic Party (NPP) and by extension the Ghanaian masses that given the nod, they can take us out of any crisis we may find ourselves in the unforseen future. If they can't solve what we face today, we cannot entrust tomorrow's to their care. To the end, a resignation of Alan Cash would be disastrous to his flag bearer fortune. He must not dare to resign.