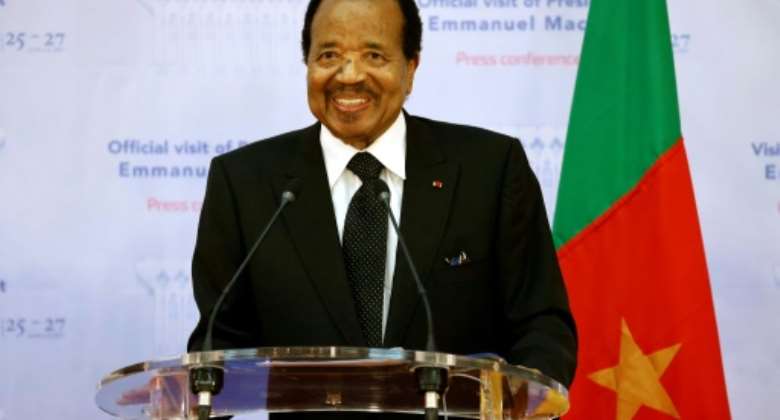 When Paul Biya first took the helm of Cameroon, Ronald Reagan was in his second year of presidency, Madonna had not yet made the charts and the Soviet Union was still nearly a decade away from break-up.

Biya, who at 89 will notch up 40 years in power on Sunday, became one of the world's longest-serving leaders thanks to iron-fisted rule and support from loyalists in key positions.

After seven years as the central African country's prime minister, he entered the presidential palace on November 6, 1982, becoming only the second head of state since independence from France in 1960.

His four-decade-long grip is a tribute to tightrope-walker skills in a country facing social, political and security problems and struggling with economic disparity.

His nicknames among the public are "Popol", an avuncular form of Paul, and "The Sphinx" -- a testament to his canniness.

"All you have to do is lose your head for a second, and you're done with," Biya told a journalist in 1986.

In October 2018, he won a seventh consecutive term after elections marred by allegations of fraud, low turnout and separatist violence in Cameroon's anglophone regions. He was declared victor with 71.28 percent of the vote.

After the fall of Zimbabwe's Robert Mugabe in 2017, Biya became Africa's oldest president and its longest-serving after Equatorial Guinea's Teodoro Obiang Nguema Mbasogo, who seized power in 1979.

In recent years he has cracked down on all opposition, political and armed, earning him rare criticism from the United Nations and Western capitals.

Biya's appointment of loyalists to key posts -- speaker of the National Assembly, head of the army and the head of the state-run oil and gas company among them -- has helped underpin his long rule.

"We are all the creatures or the creations of President Paul Biya," his minister for higher education, Jacques Fame Ndongo, said in 2011. "We are just his servants, or even better, his slaves."

Titus Edzoa, a former confidant of the president who was secretary general of Biya's presidency between 1994 and 1996 and held ministerial posts on several occasions, has said: "If you try to go against Biya, you'll be crushed."

He said Biya used "violence and terror, according to his mood and rumours, to subjugate his associates and subdue the whole of the population".

Edzoa resigned as a health minister in 1997 to stand in elections. After that, he was arrested, accused of theft and spent 17 years behind bars.

Maurice Kamto, who lost to Biya in the 2018 elections, was arrested the following year after he said he had been a victim of an "electoral hold-up." He was held for nine months and only freed after international pressure.

In the restive English-speaking west of this francophone-majority country, Biya for years rejected demands for federalism.

The anglophone campaign radicalised, leading to the declaration of an independent state in October 2017 -- a move that triggered a crackdown by Biya. Fighting has claimed around 6,000 lives and forced more than a million to flee their homes, according to estimates.

Born in 1933, the third in a family of nine children, Biya once undertook training to become a Catholic priest before enrolling at the elite Sciences Po university in Paris. France is an ally and major foreign investor.

"He's a fervent Catholic. He has good relations with the Vatican. But he also consults spiritualists quite often," said an informed source in Yaounde.

Two years after the death of his first wife, Jeanne-Irene, Biya in 1994 married Chantal, a former waitress and model almost 40 years younger than him, and who is famous for her exuberant hairstyles and high heels.

He survived a coup attempt in 1984 that left a psychological mark, a security official in Yaounde said.

"Before, he would step out in Yaounde, he was close to people. But think -- he was stuck for hours in a bunker and there were bullet marks all around when he emerged," the source said.

Thereafter, unscripted public appearances became a rarity and when Biya's motorcade passed through the streets of the capital, crowds were kept at a distance.

His repeated long absences from Cameroon, mostly in Switzerland or in his home village in his country's south, became bitterly criticised.

The Organized Crime and Corruption Reporting Project (OCCRP), a consortium of investigative journalists, in 2018 found that Biya spent "at least four-and-a-half years of his (first) 35 years in power on private visits" abroad, at an estimated cost of $65 million.