The Famous Mystery Meeting Of President Rawlings And Then President-Elect Akufo-Addo On Tuesday, 27th December 2016 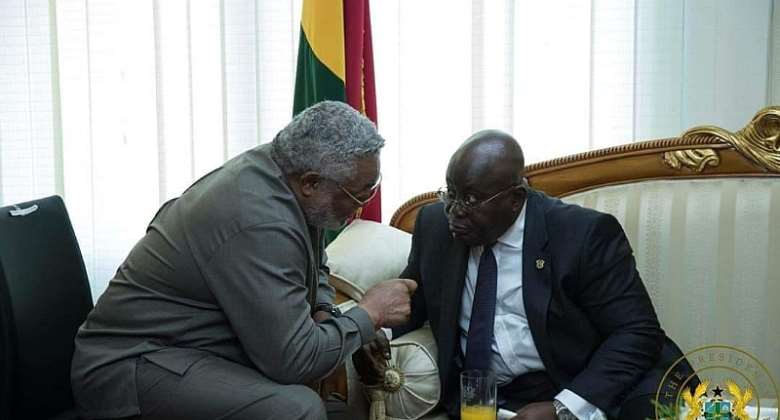 I am not by nature a skeptic, an unbeliever, a cynic, a scoffer or an agnostic but then when something out of the ordinary happens, I become intrigued by the very act or nature to want to make sense of it, question what has necessitated the occurrence and fashion out an understanding in order to place it into its proper perspective and history.

Indeed, I have allowed time to pass over what I found to be most mystical because I was hoping others might also have questioned the mysticism of that happenstance to make it a public debate, so if I am writing this after six years plus, then I know we all took it for granted as a people and as a nation; and I can understand why nobody has made the connection as yet or for a public consideration.

However, I would want to set this piece in its proper perspective of two gentlemen, who from the context or mindset of the ordinary Ghanaian or the politics of traditional relativity, should be the worst of enemies and could not even stand the warped shadows of each other: the late former first President of Ghana’s Fourth Republic, the former Chairman of the Armed Forces Revolutionary Council (AFRC) and the former Chairman of the Provisional National Defence Committee (PNDC), Flight Lieutenant Jerry John Rawlings and the current President of the Fourth Republic, His Excellency Nana Addo Dankwa Akufo-Addo.

As a young graduate of the AFRC and PNDC military – eras, I have watched with unbelieving pride and fascination, the seeming courage and daredevil-status of then a young Ghanaian, who spoke such impeccable, flowery British English, looking every bit an Oxford luminary and who could dare the very power base of those military juntas.

Our current President of the Republic of Ghana, Nana Addo Dankwa Akufo-Addo was that young Ghanaian of ‘cult’ status for me for his participation in political demonstrations and of specific mention was the ‘KUME PREKO’ demonstration of 1995.

For those who were not old enough to recall, ‘KUME PREKO’ was the name given to an anti-government demonstration that occurred in Ghana in 1995, led by Dr. Charles Wereko Brobbey, otherwise known also as ‘TARZAN’ in his prime, and others including the current President of the Republic.

The protest took place in opposition to the Value Added Tax (VAT) initiative, which was introduced under the Jerry John Rawlings administration. It is said to have been one of the biggest protests ever organized in the country, with an estimated one hundred thousand (100,000) people participating. The demonstration was initially billed as a peaceful protest but quickly became violent when unidentified assailants shot live bullets into the crowd resulting in the deaths of a few protestors. (WIKIPEDIA)

According to several reports, it was also a period in which able-bodied and hardworking citizens could not afford one decent meal a day for a family. In addition, the drop-out rate in educational institutions was said to be rising at a very alarming rate.

Please check yourself in the mirror, I am not reporting on the state of Ghana now but what happened in 1995; many sustained severe injuries and others died from the attacks; amazing how cyclical our lives as Ghanaians have been under this Fourth Republican Dispensation?

Look for the ‘STATESMAN’, ‘DAILY GUIDE’ and ‘GHANAIAN CHRONICLE’ newspapers’ articles on the 1995 ‘Kume Preko’ demonstration and its aftermath and how the same papers report on current affairs and you would wonder, as I did then and do now, how come we have inherited such media in this political dispensation?

But this is not the essence of this article!

You see, what I saw on that fateful day of TUESDAY, 27TH DECEMBER, 2016, on live television, was the visit of the then fresh President – Elect Nana Addo Dankwa Akufo-Addo to the Ridge Residence of the late Jerry John Rawlings, the 1st President of the Fourth Republican Dispensation and against whom the former had waged all manner of wars of attritions over a period of thirty plus (30+) years from the days of the PNDC.

I was not only gaping at the unfolding historic event but it immediately set me wondering the type of ‘game plan’ the then President-Elect had in mind to make him, admittedly his first major call on his once ‘nemesis’ – definitely a call that will obviously shape his tenure of office.

I remember all the name – calling, expletives used by the former President at the Cape Coast Stadium NDC Political Rally: “…these people, no matter how many times they change their ‘political party’ names, they will always remain the same; like their fathers before them, it isn’t the interest of the mass of our people that they are interested in but themselves…”

To most of the people, their kind of politics will always be about their lifestyles, new form of aristocracy, elitism, gentility, nobility, bourgeoisie-ism, gentry, upper class, jet set (now you understand the hiring of private jets at any cost), beau monde, carriage trade and plutocracy.

Remember “we are taking back our nation, our land, our resources…” – the inferences by the wife of my Mfantsipim senior?

As an innocent bystander, I could only try to situate all the occurrences of life, both seeming and real, in our beloved country within the context of what lies ahead of the youth, who are the real heirs of everything.

I thus presumed that the inferences at the Cape Coast NDC Rally was more to emphasize the position the party as that for the masses, peasantry, populace, rank and file, working class, rabblement, riffraff or the other part of the elite with the heart for the masses, than the real nature of the party.

On that fateful Tuesday, I was not only bemused, bewildered, confused, amazed or better still dazed by the spectacle of the arrival of the then President-Elect at Jerry John Rawlings’ residence, knowing how he could not stand the sight of then Chairman of the then PNDC and his stand against the introduction of the Value Added Tax (VAT) to ask myself: “How could this be?”

Don’t forget, this wasn’t a ‘NICODEMUS VISIT’ but in the full glare of both local and international media.

I became more confused to learn, rightly or wrongly, that that was a very private visit with no aides.

Since nobody was thus privy to the discussions, I assumed the most logical way to measure, trace or sniff what they could have talked about or the kind of issues that the then President-Elect could have sought pieces of advice like security: “How can I prevent a possible overthrow of my government, considering what happened to the Presidency of my late father, Edward Akufo-Addo, the second President of Ghana, who was removed from office by a coup d’état led by General I. K. Acheampong?”

“What would you recommend as the kind of security architecture that would prevent the possibilities of the kind of demonstrations that we organized against your military regime and your NDC government?” or “Better still, how do I create my own special ‘64 Battalion’ for special duties including operations during elections and what would you recommend as my best options to ensure a second term of office?”

I can again envisage another question possibility as such: “I know, you didn’t try or never tried any family and friends government but with the kind of family I have and their contributions as well as purported roles they played as ‘Founding Fathers’, how do I re-engineer the systems of state and government to restore them to their rightful places in the history books?”

“Your Excellency, former President, JJ Rawlings, what would you also propose I do with the Kwame Nkrumah Mausoleum, especially as it was constructed during your tenure by the remnants of the CPP, who were serving under you then: how do I change it the ‘FOUNDERS’ WALKWAY’ to incorporate the rest of the Founding Fathers?”

Please, do not over-stretch your imaginations because I was raised in a village, where nightlife hinged mostly on story-telling and that is why I am still at a loss as to what other issues were discussed during the fateful TUESDAY, 27TH DECEMBER, 2016 Very Private Meeting between then President-Elect Akufo-Addo and former President J. J. Rawlings but I can conjuncture that it could also have included: “You know I am not a fan of motor-bikes as my passion is more inclined towards Mercedes Benz, so how many times can I change the models or that will be dependent on how they introduce the models?”

What I have tried to achieve is to demystify the myth surrounding that fateful day set against the fact that once when President Akufo-Addo returned from a visit to his colleague and friend, the President of Cote d’Ivoire, Alassane Ouattara, I am not sure what transpired in Abidjan but that was after his friend had altered their Constitution to over-stay his tenure, our President was reported to have said he will never overstay his term.

I was taken aback by the innocent statement because after scanned our media landscape, I never saw it reported anywhere that President Akufo-Addo was harboring desires for a third time like his friend except the desire for ‘BREAKING THE EIGHT’ by his party.

This life here on earth has funny twists and turns and sometimes for leaders, Heads of States and Presidents, it will always be prudent to be ever mindful of the people, who votes make it possible to live your dreams as well as the dreams of your fathers, mindful that you are only but a ‘SERVANT OF THE PEOPLE’ and definitely not their ‘Lord’.

A CHANGE IS GONNA COME, sooner than later…need I say more,

Deadline for debt exchange programme may be extended again –...
8 minutes ago