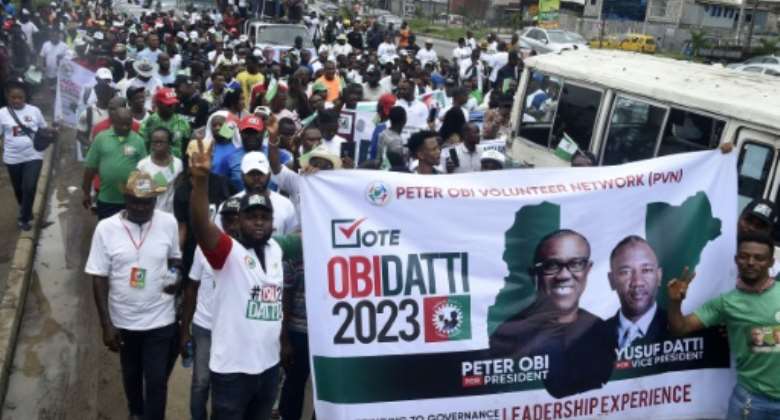 Thousands of supporters for Nigeria's Labour party candidate Peter Obi rallied in Lagos and other cities on Saturday, in the first major campaign march for the 2023 presidential election.

Five months before the February 25 ballot, main candidates appear in a tight race with Nigeria's faltering economy and rife insecurity among the top priorities for the winner.

"We are taking back our country," said Chijioke Chuwunyere, a tech consultant who was marching in Lagos Surulere area. "This is a chance to right all the wrongs."

Obi supporters also rallied near the Lekki tollgate, where peaceful #EndSARS protests demanding better governance and an end to police brutality were violently disrupted by security forces in October 2020.

Obi was not at the rallies, but supporters also marched in other cities across the country.

Obi's supporters who call themselves "Obi-dients" say the 61-year-old former banking executive offers an alternative to the old-guard candidates put forward by the PDP and APC.

High inflation, lack of jobs and insecurity have left many younger Nigerians frustrated with politics and apathetic about change at the ballot box.

But earlier this year, electoral authorities say 70 percent of newly registered voters for 2023 are aged between 18-34.

Obi has gained a huge following on social media, but analysts question how much he can convert that into votes on election day.

The PDP governed Nigeria from the end of military rule in 1999 until 2015, when the APC defeated it to give Buhari his first term.

Nationwide, the Labour Party does not have the structure of the All Progressives Congress (APC) or Peoples Democratic Party (PDP), or any state governorships. But supporters say they have momentum.

"We want a man, a governor, a president who will hear the voice of the masses," said therapist and Labour party organiser Felicity Okorocha at one of the Lagos rallies.

Tinubu, 70, has been in London resting before the start of his campaign, an APC presidential campaign council member Ayo Oyalowo told Arise TV.

"He has five months to engage with Nigerians," he said on Friday.

PDP's Atiku Abubakar, a former vice president on his fifth run at the presidency, this week launched his campaign with a book event.

Abubakar, 75, says his government experience and business acumen can "rescue" Nigeria from APC's mismanagement. But the PDP also faces a major split within its ranks with a powerful governor.