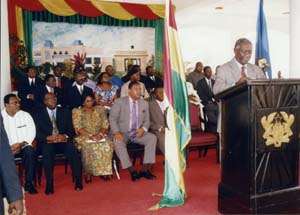 The President's press conference specifical his views on Ghana's per capita income shows nothing but a confused and very out of touch on the state of Ghana's economy by a president and government that should know better. The press conference also reveal that the NPP under president Kuffour has no plan for the nation. After listerning to the President's I am tempted into believing that Ghana is ruled by a banch of blind individuals who are not only ignorant of where they are coming from, but also don't know where they are exactly leading our nation towards. I am afraid but if the President could not give us an unemployment figer, and also did not have the our GDP per capita right then we heading for a planing disaster. The Cycle of inacuracies: In President's press conference, Ghana's GDP per head was quoted at $600 dollars U.S. The President claimed that he had this figer from Ghana's development partners namely the World Bank and International Monetary Fund (IMF). According to the President, the Statistical Service of Ghana does not have the capacity to do something as basic as calculating Ghana's correct GDP per capita figer. Hence he (the President) had to rely on the above mentioned institutions for his sources. A claim which his own minister of finance and economic planning indirectly disputed. I close look at the President's sources, World Bank and IMF, for his $600 GDP per head falls flat on the face of the facts available on both their websites and media publications on this very issue. In fact non of our developing partners on both their websites and statements indicates that Ghana's GDP per capita is $600, wheres the World quoted our GDP per capita at$380 U.S, the IMF said our GDP $420. All of these institution contradicted the President. Besides, attaining the $600 per capita at our growth of 5.8% is untainable. To achieve the Presidents $600 per capita income our current economic growth must be arround 8.5% and our population should remain at current sensus figers. The World Bank also portrayed our President as lier (Excus my words). The Bank claimed that its sources of Ghana's economic figers is the Statistical Service of Ghana. The same institution the President discredited at his press conference. Even if the calcuation of the quoted per capita income by the institutions above were wrong, and that there are some miscalculation, the onus lie on the President's economic term to advice him to wait until everything cleared before going public with a figer inconsistent with all official records. The Confusion of Planing: It is basic knowlege that to provide fufu for hungry individuals, you need to know how many of such individuals are hungry. This will allow you to know how many cassavas to buy, and the bowls of fufu you need to produce. In same vein to provides jobs it is necessary to know not only the unemployment figers, but also how many jobs are needed to reduce if not solve the unemployment problems in the country. We also need to know in which sectors of economy and in which regions are the unemployment situation prevelent. In some advance countries like Canada where I live, this is done quartly by the ministry of labour and human resources development. By knowing all these, the government will be in the position to plan, predict, target and focus. The President's explanations does not depict his election 2000 slogan "a gentle and humble man with a vision to save our motherland....". It rather depicts him as a confused and visionless Leader leading our country to disaster. Confusion of information among Ghanaian officialdom: Information manipulation was one of the key strengths of the NPP whiles in opposition. But information management is currently NPP's worse nightmare. More oftern than not ministers of state gave conflicting if not confusing informations. On the $600 per capita income, the minister of finance and economic planing was caught flat footed by the president. It could be deduced from his interview with the Independent newspaper that he did not know how the President arrived at the figer. He said "You see, when you look at the budget for the year 2005, nominal Gross Domestic Product (GDP) stands at about 97 trillion cedis. When you divide that figure, the 97 trillion cedis (sic) by the dollar-cedi equivalent of ¢9000.00 and divide the result by the sum of the population which is estimated at 20 million, you get a figure of around $530. So probably, the President's figure is correct,". He did not say the President was corrected and explained why it is indeed correct. But he gave us a probability that the President's figers might be right. Little did he know that he is telling the whole world that the President was wrong. He said if you did divid our national productivity by the population you arrive at arround $530, but $530 is not $600. It is not even approximately $600. Conclusion. It clear for every serious observer that the NPP government is inefficient in its management of the country. Also, it unfortunate that after five years in office, the government is still buried in the tragectories of the past. Blaming its predecessors whenever it is in bad business. Government is not run that way. Governance is about making decisions and taking responsibilities for your decisions and actions. NOT BLAME GAMES ALL THE TIME. Abdul-Rahman Welland, Ontario Canada Views expressed by the author(s) do not necessarily reflect those of GhanaHomePage.