You Are Wrong Dr. Bawumia: Setting The Biblical Record Straight 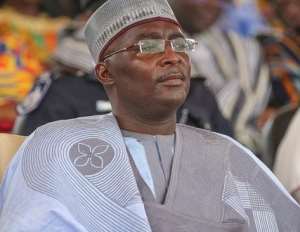 According to the Bible, Jesus' first coming was for salvation and His second coming will be for judgement. Please, don't confuse some Christians with wrong teachings in your quest or desperation to appeal to them for acceptance.

Jesus is not coming again to save us all, as you claim in the video below. According to the Bible, only the truth shall set the Christians free. So, let's stick to the truth when it comes to spirituality. Respectfully, let me kindly entreat you to stop imposing your beliefs on Christians. It's spiritually dangerous.

The Angel who announced the first coming of Jesus said to Mary, His name shall be called Jesus because He will save His people from their sins. That occurred on the cross, according to the Bible. John 3:16 also makes it clear His first coming was for salvation.

Besides, Jesus Himself makes it clear that His coming will be for judgement/reward. According to the Bible, at his second coming, there be judgment before the Great White Throne and The Judgment Seat of Christ.

This is what Jesus Himself says in the Book of Revelation: “And behold, I am coming quickly, and My reward is with Me, to give to every one according to his work.(Rev 22:12 NKJV)

We shouldn't allow any person to distort the fundamental beliefs of the Christian faith for his or her political profit.

Where are DISECs in this whole galamsey brouhaha – Otumfuo q...
12 minutes ago

Akufo-Addo announces plan to establish Tourism and hospitali...
12 minutes ago