‘Asomdwehene’ Was More Than A Merited Title (2) 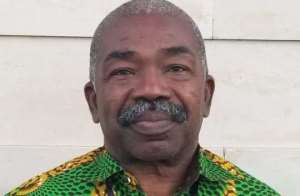 AS A typical Accra Hearts of Oak SC supporter from my youthful days, from as far back as my days at Mfantsipim School to the Kwame Nkrumah University of Science and Technology (KNUST) in the seventies, I recall the late Ohene Djan, the first Director of Sports at the then Central Organization of Sports (COS) in later years become an advisor to my friend, Simms K. Mensah, the then flamboyant Chairman of Kumasi Asante Kotoko Sporting Club. I had also developed a close relationship with the Late Tommy Thompson, a contemporary Chairman of Accra Hearts of Oak SC and from this, I saw the late Ohene Djan, without proper appreciation and contextualization of his exploits and contributions to the growth and development of Ghana Sports, as perceived 'Against'.

After reading extensively on Ohene Djan's contributions after his death on 26th March, 1987, I realised he deserved more than he had been accorded by Ghanaians and therefore sought the permission of his Nsawam family to institute the Annual Ohene Djan Memorial Lectures with the inaugural scheduled for the year 1989.

After contextualizing the concept, I was left with the choice of the appropriate person to deliver the first Lectures, with the proper credentials, both in academia and sports, to ensure a befitting tribute to the late Ohene Djan. I approached Prof. George Benneh of the University of Ghana and a family friend, with the intention of getting him to accept and deliver the debut lecture on “The Man Ohene Djan”.

Prof. Benneh, politely rejected the invitation to be the Speaker and rather offered to chair the event rather, pointing in the direction of the late Prof. John Evans Fiifi Atta Mills, who incidentally was not only the NSC Board Chairman but a champion athlete in his days at Achimota School and a hockey star in his own right. This was during the tenure of Hon. Kwame Saarah Mensah, former PNDC Secretary for Youth and Sports and my senior at the Department of Land Economy and Estate Management, KNUST, Kumasi.

What a right choice it turned out to be, indeed.

Living up to his credentials as one of the youngest Professors of Law at the University of Ghana, the late J. E. A. Mills took the lecture as a 'World Cup' with the depth of research, including the sporting genre of Ghana's President of the First Republic of Ghana, Dr. Kwame Nkrumah, a talented athlete, a champion runner during his school days at Achimota School and proper plans executed by Ohene Djan with absolute support of his President.

I will never forget how proud I felt at the Inaugural Ohene Djan Lectures in 1989 at the British Council, where Prof. George Benneh, himself also delivered another edition of the same lectures from a different perspective – Schools and Colleges Sports as a Tool for Building a Nation.

The late Prof. J. E. A. Mills lived and technically 'ate' Hockey, as we would say in 'Sekondi Fanti'.

Whilst I was an employee of the National Sports Council, I started a sports weekly 'Sports Coin' as the editor, whilst I was also the host of the weekly TV sports magazine programme, 'Sports Digest' on GBC-TV. I had also started a PR & Sports Marketing agency, Rex-Image Associates, counting amongst my clientele Bamson Company Limited and Ghamot Company, accredited agents and distributors of Toyota vehicles in the country.

The triangle relationship of Prof. Mills, Ato Ampiah, then Managing Director of Ghamot Company and my agency bore a fruit of the inauguration as well as the sponsorship of the Annual Toyota Hockey League, managed by my agency and sponsored by Ghamot Company. This witnessed the refurbishments as well as branding of the Theodosia Okoh and 37 Hockey Pitches for the league.

This feat brought the relationship of Prof. J. E. A. Mills and myself closer still and saw him accepted an invitation as the Special Guest Of Honour at the opening of a new Toyota Showroom on the Graphic Road, where the 'Toyota's Most Exciting Footballer Award' was presented to the maestro Abedi Ayew Pele, in another event organized and managed by my agency.

The relationship blossomed over the years and in 2009, Ghana was awarded the rights to host and organize the AfHF Hockey Africa Cup of Nations Championship (Ghana 2009) under the theme: Let's Begin To Dream Again' and which included the refurbishment of the National Hockey Stadium.

Prof. J. E. A, Mills had been elected the third President of the Fourth Republic of Ghana and had commissioned the refurbished National Hockey Stadium on 6th July, 2009.

Whilst we were preparing to host all the nations who had qualified to participate in the 2009 Hockey Championship, we got wind of the fact that the 44th President of the United States of America, Barrack Hussein Obama II, the first African – American President and his wife, Michelle would be visiting Ghana around the same time of the continental event.

As if possessed, I rushed off to senior Oko Nikoi Dzane, the Vice Chairman of the Local Organising Committee (LOC) for the African Hockey Championship 2009 and asked, “Why don't we ask the 'Old Man' (the late President J. E. A. Mills) the possibility of getting President Obama to perform the kick-off for the championship, especially as it would give the event the greatest push globally?”

The opening ceremony of the Hockey Championship was coinciding with their planned drive to Cape Coast. However, we were informed that the visit had been planned on the quiet for a while now for months and that possibly if we had made the request earlier during the planning stages it could have been considered, though long shot.

You see, such was the person, late Prof. J. E. A. Mills, very open to all sorts of ideas for the betterment of his nation.

There are quite intimate moments, which we shared, some through his campaign offices at Kuku Hill, Accra during the 2008 elections, which made his Campaign Assistants call me later to ask, “how did you know this?” and we laughed over the issues for the answers I advanced.

One of those Sundays that he used to visit various churches, he came to Royalhouse Chapel (Ahenfie) to worship and I found myself seated right behind him, when salutations with introductions were made and shared, he realized that I was seated right behind him so he got up as I did and shook my hand, asked me how I was and sat down: 'What A Humble President!”, was all I could say to myself with this great lesson in 'Humility 101' learnt.

I remember, one of those days before the Opening Ceremony for the 2009 African Hockey Championship, when it became clear that he couldn't accept to be present because of President Obama's presence in Ghana, the LOC delegation had to go to the Osu Castle to see him and brief him on preparations thus far.

When he came in and scanned the room as to who constituted the delegation, he intimated that he was happy the occasion had forced someone who had dodged him since his elections to be present, as the person was obviously determined to keep away from him and his office. When he walked over to welcome and shake our hands, he asked when he got to me, “Why have you stayed away from me after the support you had extended to my election?” I smiled as always, and he walked on to the next and finally, when it was time to go, he asked me to find time and visit sometimes.

Unfortunately, that was not to be, as we lost him to death.

Yes, I miss him for who he was, a gentle heart, a compassionate soul, a nationalist to a fault, an unrepentant patriot, a humane Ghanaian, a true humanist and a through and through 'Phobian'.

His enemies had always preyed on his humility even in the highest office of the land; his care for humanity looked upon by his enemies as his weakest traits will always paint him as a different person, as these showcase the strength of his character and love for the ordinary Ghanaian.

Guess he never bargained for the High Office of the land but lived it as if he was born to be a President of this nation and sincerely, his humanness is definitely what this nation, Ghana needs after 2024 National Elections.

We are currently too divided and most fractious as a nation, as if the next General Elections in 2024 will be our very last, seeing what the last six years have been, the depth of acrimony, depth of divisiveness, the quest to balance scores, the deaths associated with the last 2020 elections without the desire for inquests to punish the crimes, the seeming violence looming ahead of us towards coming elections; the deafening silences of our supposed 'men of conscience'; the renewed 'tribalization' of our people after 65 years of political independence into nationhood – “What would Prof. J. E. A. Mills have said and done?” if he was still alive to be the next President of the Republic after the exit of current President?

OSP not enough to win the fight against corruption — Micheal...
21 minutes ago