Democracy, Trump and the Bombshell testimony of a 25-Year-Old White House staff 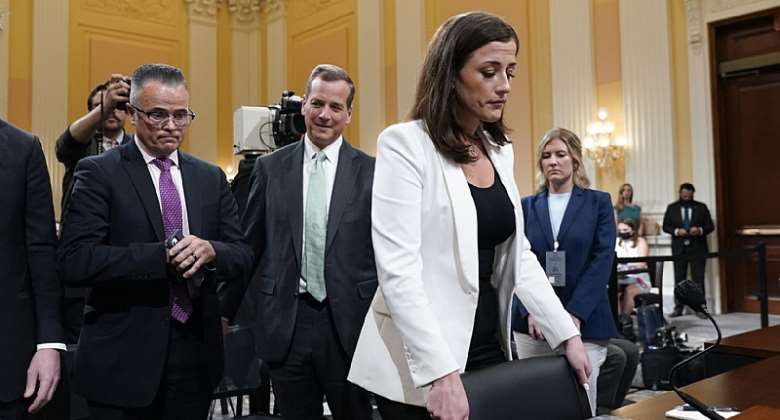 On a scale of 1-to-10, the pretty but obviously stressed young, politically conservative woman who was testifying at the House select committee investigating the January 6 attack on the Capitol, was struggling between 9-to-9.5. She moved into what Americans ordinarily refer to as real, juicy stuff.

Many would have dismissed it as made up stuff against Trump. She had no axe to grind with the giddy, intemperate, indiscrete, aggressive and injudicious former President Trump; except may be she felt strongly about the basic elements of presidential behavior, On that score, her small corner table was only a sneezing distance from the Oval Office, the sanctum santorum of American presidential work central.

Her revelations of the boorish, banal, reckless and unseemly misconducts by Trump had the most believable exposition by a credible witness and testimony bearer.

Take this, for example., although, there had been variations and interpretations about Trump’s intent after he finished his incendiary speech to the insurrectionists movement on January 6, as to whether he wanted to simply go back into the White House, quickly take down a triple layer McDonald’s sandwich, chill out and or grab his phone and unload his angst via twitter about this bizzare, quixotic scream about “the stolen ballots.”

The “good fellas”, Trump’s “good people”, specifically the “Proud Boys” and their confederacy of racialists and antiSemites, anti-Black bigots and anti-immigration gangs were in the area to create confusion, conflicts and get some folks beat up!

According to Cassidy’ revelation that after his speech, Trump entered the presidential limo. Apparently, he thought they were driving him to the prime legislative real estate of the world, an area that became, a few minutes afterwards, the ground-zero of mayhem and arson and brutal breaches of the law.

She revealed that then deputy White House chief of staff for operations, Tony Ornato, said to Trump’s security detail to be aware that the Capitol zone was no longer safe.

When they basically protected the President from himself, Trump was enraged and reportedly said something like: “I’m the fxxxing president, take me up the Capitol now.” Thus, began the jarring revealation that Trump tried to hold the steering wheel. According to the former aide at the White House, Robert Engel, the head of Trump’s security detail, politely but firmly replied, “Sir, you need to take your hand off the steering wheel. We’re going back to the West Wing. We’re not going to the Capitol.” It was shortly after that Trump “lunged” at Engel….

It is such vivid recalls, historical contexts and the nunaced front-row witness to history, fueled by emerging, latest facts of Mr. Trump’s failed quest to hijack the destination of this republic that millions of Americans feel differently about the man!

Cassidy’s riveting testimony about how Trump and some of his minions sought to redirect to his underserving benefit the outcome of the November 2020 presidential election caused the January 6 select committee Chairman Bennie Thompson to make the point, that:

After hearing your testimony in all its candor in detail, I want to speak directly to the handful of witnesses who have been outliers in our investigation, a small number who have defied us outright., those whose memories have failed them again and again, on the most important details and to those who fear Donald Trump and his enablers because of this courageous woman, and others like her: Your attempt to hide the truth from the American people will fail.”

In another moment, Miss Cassidy testified that former President Trump threw his lunch against the wall when he read his Attorney General Bill Barr’s AP interview, where he stated without equivocation that there was no election fraud, and that Joe Biden won! The young woman testified that: “There was ketchup dripping down the wall, and there was a shattered porcelain plate on the floor.”

Without any doubt, like I have argued on this platform, some time ago, January 6, 2021 has become the Donald Trump mob day of infamy. It is the day that the United States and the world witnessed the explosion of the megalomanaical and selfish impulses of the 45th President of the United States, Donald Trump.

On that day, Trump and his supporters diminished the collective dignity of America as a beacon of democracy. The mob invasion and thrashing of the U.S Capitol building, location of the Senate and House of Representatives, left millions wondering: is this really happening in America?

Why is an American President so consumed by his surrealities and fictional focus on falsehoods that he will place at risk, willfully and deliberately, his Vice President Mike Pence and most of the Congressional contingent of this country?

The world is understandably disappointed by the crudities and vile excesses of the evidently tempestuous and corrosive Trump. A man of ungovernable attitude and outrageous fixations. He promised to make America great again (MAGA); but sadly, the man has dragged to the mud the well-earned, centuries old reputation of America as the land of peaceful transfer of power!

•Dr. Chido Nwangwu, author of the forthcoming 2022 book, MLK, Mandela & Achebe: Power, Leadership and Identity., is Founder & Publisher of the first African-owned, U.S-based newspaper on the internet, USAfricaonline.com, and established USAfrica in 1992 in Houston. He served as an adviser on Africa business to Houston’s former Mayor Lee Brown. Follow him @Chido247

Adwoa Safo will be present after Parliament’s recess, ready ...
51 minutes ago