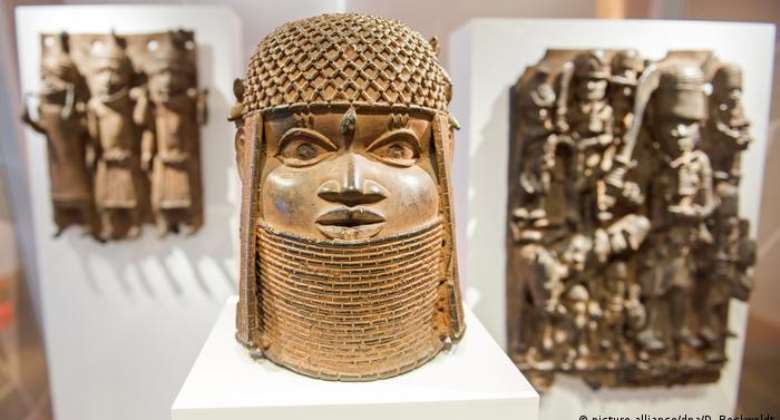 Benin Bronze artworks at the MKG museum in Hamburg

We reproduce below a press release issued by Berlin Post-kolonial on the occasion of the signing of a Joint Political Declaration on the restitution of the Benin Bronzes signed by Germany and Nigeria.

Readers will no doubt remember that the question of the restitution of the Benin Bronzes looted by a British Army in 1897 has been in discussion for a very long time and we have explained in mordenghana.com all the controverses surrounding these precious treasures the British stole and sold to European and American museums whilst keeping a huge number in the British Museum. The Germans have kept their promise and returned legal ownership of the artefacts to Nigeria.

Post-Kolonial and other German organizations have played an important role in obliging Germany to examine its colonial history and to restore to the true owners the precious treasures that have been kept away for more than one hundred years.

We hope that other European nations such as the British who started the whole game of looting treasure will follow the German example.

Return of the Benin Bronzes: Germany must surrender property rights to all cultural treasures and body parts of colonised people

Berlin Postkolonial welcomes the restitution of the Benin bronzes as a success of the descendants of colonised people, who were able to overcome the current owners' decades-long resistance to restitution. However, the cultural treasures captured in Benin City represent only the tip of the (colonial) iceberg.

Accordingly, we call for a nationwide regulation that grants the descendants of the colonised the right of ownership to their cultural treasures and ancestors. Research on and exhibition of cultural objects and colonised ancestors should no longer be done without their explicit consent. Repatriations should no longer depend on the consent of the current owners.

Economic crisis: We shall resist any attempt to cut our pens...
27 minutes ago