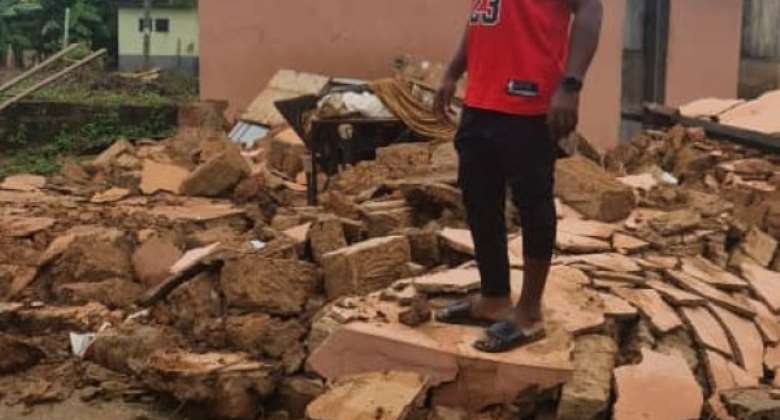 The long hours of torrential rains that hit the Twin city of the Western Region have rendered many homeless.

The rain also covered the surfaces of many major roads including the Ketan to Nkroful Junction, Kansaworodo, vodafone, Paa Grant and the Apollo highway.

The situation as observed by Ghana News Agency saw many school children and commuters stranded by this nature's act.

The rains also submerged the Apowa and some portions of the Nkenya-agric environment and areas such as Apowa- Saint Mary's while some vehicles were trapped in the ravaging water.

Some inhabitants had attributed the rise in floods in recent times to bad engineering practices, cutting of hills and filling of swampy lands to build structures.

"The rainwater, which had been displaced by human activities was vent on school children and some people who had to fight for passage to their various destinations especially around Apowa and Apollo area."

Others, who also had a hectic time crossing the gushing water, were helped by volunteers to ferry them to the other end of the road.

The Marine Police, led by the Regional Police Commander, DCOP Victor Adusah-Poku, however, rushed to the scene to salvage the 'looming danger.'

The security agency provided life jackets to assist the people to cross the flood line.

Meanwhile, the rains continued as weather reports show more downpour in the coming days along the coast.

'My Ga, Fante, Ewe and Northern brothers when was the last t...
19 minutes ago