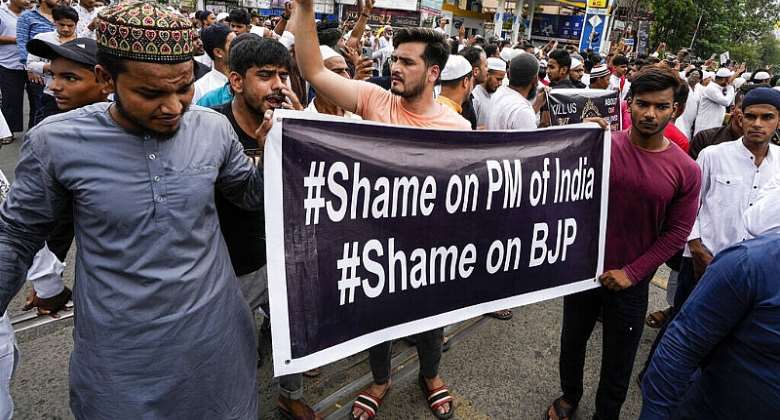 More than 300 Indians were arrested in northern Uttar Pradesh and hundreds more in West Bengal, and Jharkhand and Assam after unrest spread across several towns following controversial remarks made by senior members of Narendra Modi's ruling party about the Prophet Mohammad.

The rallies were sparked by derogatory remarks about Islam and the Prophet Muhammad and his wife Ayesha made recently by two spokespeople from the Bhartiya Janata party (BJP).

Muslim groups have demanded the arrest of the ruling party figures while some hardline Hindu groups label them as brave and nationalist politicians.

Both Nupur Sharma and Naveen Jindal, who have since been ousted from the BJP, have also received support from many party supporters online after the recent protests against their remarks took a violent turn.

The Indian government was forced to distance itself from the comments amid a diplomatic storm between New Delhi and several Muslim majority countries, including Iran and strategic partners in the Gulf.

At least 20 Islamic countries and multilateral bodies like the Organisation of Islamic Cooperation issued statements condemning the remarks. Iran was among eight nations that also summoned their Indian ambassador to the foreign office to receive the démarche.

“The Indian government accords the highest respect to all religions," said foreign office spokesperson Arindam Bagchi. "The comments denigrating a religious personality were made by certain individuals.”

Ever since the diplomatic storm that erupted in Islamic countries following the controversial comments, New Delhi is trying to put its best foot forward to manage the diplomatic fallout.

Though the government tried to distance itself from the offensive comments, pointing out that it did not in any manner reflect the official view, it has not washed.

“It cannot be undermined by hate speech and communal politics.”

However, on the ground the damage had already been done, as popular anger gave way to demonstrations by India's Muslim minority, numbering nearly 200 million.

Since coming to power nationally in 2014, Modi's government and the BJP have been accused of championing Hindu nationalist causes and discriminating against Muslims.

“These protests need to be seen as an assertion of citizenship and that this sizable community also needed to be safeguarded against hate speech and other violations,” said political scientist Sudha Pai.

In recent months, India has been witnessing religious tensions between the Hindu and Muslim communities in different states.

Some of these controversies include a ban on headscarves for female students, the razing of Muslim neighbourhoods after communal clashes, and efforts by Hindu nationalists to reclaim high-profile mosques.

The BJP, however, said the protests were an attempt by Islamic interest groups to rally communal tensions for political gain.

Rahul Gandhi, leader of India's main opposition Congress Party, said on Twitter that the ruling party's actions are weakening the country at the global level.

“BJP's shameful bigotry has not only isolated us, but also damaged India's standing globally,” Gandhi said.

Ejisu Roman Catholic School gets water closet for the first ...
28 minutes ago