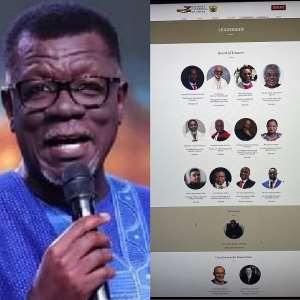 The recent development regarding the national cathedral has revealed that the government has removed Pastor Mensa Otabil’s name from the board of trustees.

This was after it was reported that the revered Pastor Otabil resigned as a board member.

Member of Parliament (MP) for the North Tongu constituency, Samuel Okudzeto Ablakwa, on Monday, June 13, 2022, through a post on his Twitter said Pastor resigned last year yet his image and profile was still on the National Cathedral's website.

Check reveals that Pastor Otabil's name has been deleted.

“After exposing another layer of deception relating to the grossly misleading claim on the website of the national cathedral that Pastor Mensa Otabil was still a member of the Board of Trustees; I can now reveal that last night, Govt quietly took out Pastor Otabil, from the website,” he wrote

He revealed this in a similar tweet on Wednesday, June 15, 2022, with a photograph of the current board of trustees attached.

Mr. Samuel Okudzeto Ablakwa is among a section of Ghanaians who are waging war against the National Cathedral project.

His reason is that the current state of the Ghanaian economy does not demand the building of a cathedral.