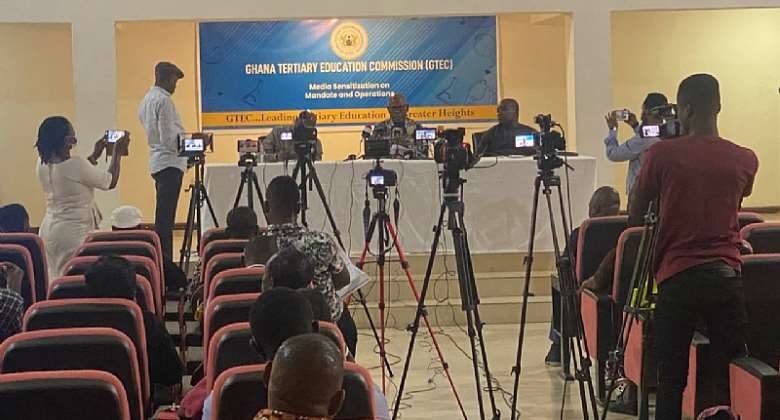 The Ghana Tertiary Education Commission (GTEC) has called on the media in the country to form a collaboration that will help expose and deal with unaccredited tertiary institutions in the country.

Prof. Mohammed Salifu, Director-General of the Ghana Tertiary Education Commission made this appeal to journalists on Thursday, June 9, 2022, when GTEC held the first-ever seminar for the media in the country in Accra.

The aim of the seminar by GTEC, a body merged from the erstwhile National Council for Tertiary Education (NCTE) and the National Accreditation Board (NAB) was to strengthen collaborations with all stakeholders to have a better chance of overcoming the challenges in order to excel in what is required of the commission.

Delivering a presentation on the mandate of the commission as stated in Article 1023, Prof. Mohammed Salifu disclosed that one of the challenges facing his outfit is the influx of unregistered tertiary institutions hiding and pretending to be offering programmes that are uncertified to unsuspecting Ghanaians who end up just wasting money.

Stressing that GTEC is keen on clamping down on such institutions, the Director-General of GTECT implored the media to help protect the public by exposing these institutions.

“We need to protect the public. There are so many institutions out there purported to provide tertiary education and are not even responding as required, we need you to help us find them out and bring them to conform to the law.

“We can’t protect the integrity and prestige of our territory education system if the qualification that are awarded are not the required qualification,” Prof. Mohammed Salifu told journalists at the GTECT seminar.

He continued, “Last but not the least I want to call on you finally for us to build that partnership so that we can maintain eternal vigilance and hold our tertiary education institutions accountable so that they deliver what they promised to deliver to our young people who are desirous to attaining higher education.”

On his part, the board chairman GTEC Prof. Kwame Boafo-Arthur expressed appreciation to all the journalists that attended the seminar for the media.

He underscored the importance of the media, insisting that they are key to the work of GTEC to make tertiary education better.

He stressed that through a collaboration between GTEC and the media, there will be huge contributions not only to education but to national development as well.

Burundi's Gatumba massacre offers a window into the past and...
12 minutes ago