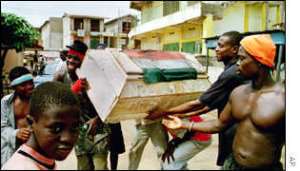 After the December 7 election in Ghana many pseudo analyst have come out with their explanation for NDC's lost in the election. Most of these analyst are anti-NDC, to say the least. Many of them in their comments and writings before the elections have already projected the collapse of the party. NDC's performance in the just ended elections came to them as a suprise. These writers are therefore in "denial" of the falseness of their analysis of the elections. To find an escape goat, they put the blame right at the door step of Mr. Rawlings, who they hate in any case. Some of these people have gone to the extent of decribing Mr. Rawlings as the "evil" within the NDC. These sorts of comments are unfortunate and hypocritical. To many of these people, any comment against Mr. Rawlings, both within and outside the NDC, is a tool to justify their diabolic stance. The NDC finished the just ended elections with 44% of the popular votes counted. The difference between the NDC and victory in the election is plus or minus 7%. This is a great showing, leading figures within ruling NPP have already expressed their suprise at the performance of the NDC. Given that the party was fighting for power from a weaker stand point. Events in Ghana since NPP took over office 2000 all militated against the NDC. The party was accused of corruption, its minister were sentenced to prison terms. A political human rights commission was set up to put the party in a negative light, and most importantly the party contested against an incubent President. Inspite of all these reasons, the NDC managed to finish the elections respectfully. The NDC not only had over 44 percent of votes, but also can boast of 94 seats in the house of parliament. Contrary to the mind set of many "voodoo" analysist the party defeated some NPP ministers and won back all the seats it lost in the by-elections. As a fan of the NDC, I think the Rawlings factor really worked. We in NDC will not allow people to dectate how we should use our founder. His contributions to the Mills campaign is very enormous, and thank him for his continued support. If those "voodoo" care to know, the contribution of Mr. Rawlings to the Ghanaian stability and democratic is compared to non in the annals of our history. Many Ghanaian recognised that contribution, hense 44% of them responded in the just ended elections. Growing in late 1970s and early 1980s, I, like many Ghanaians, have seen what Rawlings did. In 1978, as young boy, I witness Ghanaians queue for a loaf of bread and a tin of milk. I saw a man die in the queue, because he was so hungry. Ghana used to be least in West Africa, our woman and men are mocked when they travelled across the sub-region. Thanks to Rawlings and his men, these are now things of the past. Today, we are so stable that we host refugees in our country. Rawlings contribution to our democratic democratic is also very vast. He supervised the writing of the constitution, contested elections and won twice, when his party lost elections in 2000, he did not behave like Eyademah and Campore (both are Mr Kuffour's friends). He organized a transition and handed over power as is constitutionally required. This is historic in our development as a country. Suffice to say that most of Rawlings critics call themselves Nkrumaist. They believe that Nkrumah is their their founder, yet they see everything wrong with the NDC calling Rawlings its founder. They accuse of him of human rights violations. Of course there were some human rights excesses in the PNDC and NDC eras, but the same could attributed to all the regimes we had in Ghana, from Nkrumah to date. I admire Dr Nkrumah for his good deeds, but he passed the Prevention Detention Act (PDA). Many Ghanaians including Dr. J B Danquah died as result. He also made himseld the live president of Ghana, which Rawlings did not do. Dr. Busia was acclaimed as the greatest democrat in our history, yet the Sallah case was a violation of human rights. The Killing of Ya-Na togather with 40 others, and the recent killing of Alhaji Mobila will remain part of Kuffour's legacy. The "Voodoo" analyst would want us to believe that the Rawlings era was the only "dark" ages in our political development, but they are wrong. Before Rawlings there were many military regimes in Ghana some of which are more notorous than Rawlings era. It is important that we give people credit where it is due them. We should not seek to demonise people whose contributions to our development are priceless. Views expressed by the author(s) do not necessarily reflect those of GhanaHomePage.