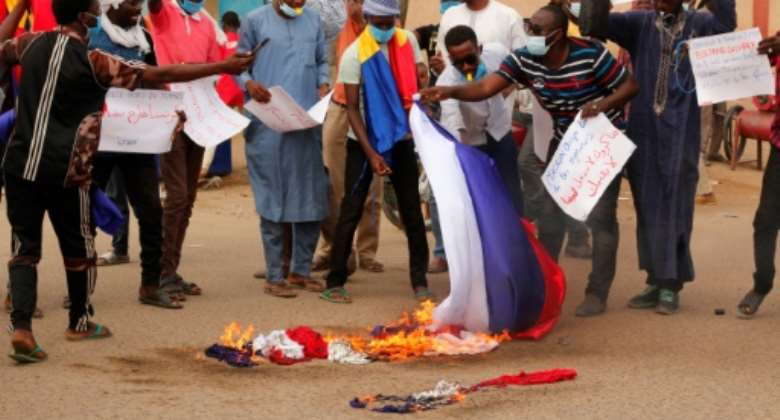 Protests broke out on Saturday over France's perceived support for Chad's junta. By Djimet WICHE (AFP)

Five people have been arrested in Chad following violent protests against France, which demonstrators accused of backing the country's military junta, opposition and police sources said on Monday.

Seven petrol stations belonging to French oil major Total were attacked and a dozen policemen injured in the unrest which broke out on Saturday in the capital N'Djamena, a police official said, speaking on condition of anonymity.

"Five leaders of the protest" have been arrested, "and are being held at the headquarters of the domestic security service," the source said.

Chad has been under military rule since its 30-year president Idriss Deby Itno was killed in April 2021 during operations to crush rebels in the north of the country.

His son Mahamat Idriss Deby Itno, a four-star general, took the helm at the head of a 15-member group of senior officers.

The takeover was widely accepted by Western countries, led by the former colonial power France, which sees Chad as a close ally in its fight against jihadists in the Sahel.

Other recent coups in Africa -- in Guinea, Mali and Burkina Faso -- have encountered condemnation or regional sanctions.

Max Loalngar, a spokesman for the Wakit Tamma opposition group which called for the protest, confirmed that five people had been arrested.

"They are not involved in the acts of vandalism. They have been wrongfully arrested," he said.

"The police cleared out the (main) demonstration area and sporadic demonstrations then broke out afterwards -- we are not responsible," he said.

Several opposition parties have called for the release of those arrested.

An AFP journalist said hundreds took part in the demonstration and at least two French flags were burned.

On Monday, a demonstration gathering hundreds of high-school students, many of them chanting "France out," was dispersed by police in N'Djamena, an AFP reporter saw.

There were no arrests or casualties, a police official told AFP.

Late Sunday, Communications Minister Abderamane Koullamallah condemned the violence the previous day as "extremely serious... people will be held to account for their acts".

The junta announced after its takeover that it would hold "free and democratic elections" within 18 months after staging a nationwide forum on Chad's problems.

However, its "national reconciliation dialogue" -- due to have started on May 10 -- has been postponed.

Armed groups failed to agree on a joint stance at a "pre-dialogue" meeting aimed at coaxing them into the process, and the forum has been boycotted by opposition political parties.

France has urged Chad to stage the talks without delay.