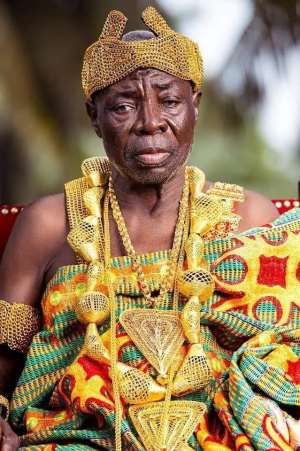 Contrary to the population notion that Ahantas were brought to their current destination by Badu Bonso, the Mighty Whale, it is becoming more apparent that the man who brought Ahantas was the mysterious Annor Asmah. He was who is believed to have guided them to cross River Pra around 1229 and settled at Busua. Annor Asmah is believed to have broken away from his Anyi kinsmen in present day Cote D'Ivoire and moved eastward until he finally brought his followers to Busua.

Ahantas soon after settling at Busua, Ahantas organized themselves into chiefdoms and remained one of the thriving kingdom along the Atlantic coast. Jean Babort, the French explorer who toured Gold Coast in 1700s described their style of governance as a federal government with east and west wings. Jean Babort also described Ahanta as martial, potent and populous.

Though Busua remained the capital of Ahanta, they organized themselves in chiefdoms and chiefs ruled without chieftaincy titles. Rulers were known by their maiden names and nothing more. Welman (1930) maintained that the Badu Bonso dynasty was created after John Canoe and his warring years after which there seemed some silence in Ahanta for a period of of about 100 years.

Below are Ahanta kings who occupied the Busua stool under the title of Badu Bonso II:

I. BADU BONSU I (BADU BONSO)

Welman (1930) states that after era of John Canoe and his warring years, not so much was heard about Ahanta. In the early 1800s Ahanta created a dynasty under the BADU BONSU and such nothing much is known about Badu Bonso I, except the fact he is referred to as the Mighty Whale. It is however believed that he came on the Busua throne in early 1800 and reigned for about 30 years. His name Badu Bonso, remained title for successive Ahanta kings till today.

The most daring of all Ahanta kings. His name is Asua Nyanke and assumed the title Badu Bonso II after he was installed somewhere 1830. Soon after his installation, he started disputing the terms of Butre Treaty which Ahanta Chiefs signed in 1655. Welman (1930) described him as *cruel, arrogant and grasping*. He is known to have executed a Sekondi man despite all efforts made by the Dutch government to stop him. In his efforts to drive away the Dutch from Ahanta, he banned the sale of guns and gunpowder in the whole of Ahanta. When he found out that the chief of Sekondi was secretly selling guns and gunpowder to the Wassa people, he wanted to execute him but he ran to seek refuge with the Dutch. That eventually led to altercations between him and the Dutch. He eventually went to war with the Dutch led by Jacob Hendricks Tonneboijer in 1837. He defeated the Dutch and killed Jacob Hendricks Tonneboijer who was then the Dutch governor of Gold Coast. In 1838, the Dutch dispatched forces from Hague to have him arrested. He was beheaded and his head was taken to Hague where the head got missing for 170 years and later discovered in 1997. In 2009, his head was returned to Ghana.

After death of Badu Bonso II, the Busua stool became vacant for 10 year and in these 10 years, the Dutch forbade Ahantas to rebuild Busua after burning the whole town in 1838. Realizing the state of affairs in Ahanta, Hima Dekyi of Dixcove came to Busua and ensured that Afuamoa, the younger brother of Badu Bonso II was put on the Busua stool. He was enthroned as Badu Bonso III in 1848 but died in 1849. He lasted just about a year on the throne.

His real name was Nda Apim but the Dutch referred to him as Nta Apim. He ascended the Busua stool in 1850 and assumed the title Badu Bonso IV. He spent most of his years fighting for the Dutch government to recognize the Busua stool as the ancestral stool of all Ahantas but all efforts made by him proved futile. The Dutch government kept telling him that the office of Badu Bonso was abolished in 1838 when Badu Bonso II was executed for treasonable acts. After all his efforts to unite Ahanta failed, he committed suicide in 1863 after 13 years on the throne.

The Dutch spelt his name as Kwow Ason but his real name was Kwaw Asua. He was installed in 1868, 5 years after the death of Badu Bonso IV and he became Badu Bonso V. It has been some 40 years after the death of Badu Bonso II and under the rule of Kwaw Asua as Badu Bonso V, Ahantas started repairing their broken relationship with the Dutch and this time the Dutch seemly started to recognize Busua as the capital of Ahanta though they never gave official correspondence in that effect. Under the instigation of Capt. P.W Alvarez, Kwaw Asua as Badu Bonso V marched on Dixcove on Sunday 13th June 1869 and looted the town for being loyal to the English. Kwaw Asua and his forces returned again in the company of Capt. P.W Alvarez on Monday 14th June 1869 and this time the people of Dixcove put up a brave fight against Kwaw Asua and defeated him and his forces. Kwaw Asua returned again in the evening but heavy gun fire was discharged on him from Fort Metal Cross forcing him and his forces to flee into the bush. Soon after that, he died and this time the Dutch recognized his position as king of Ahanta and sent a delegation to his funeral.