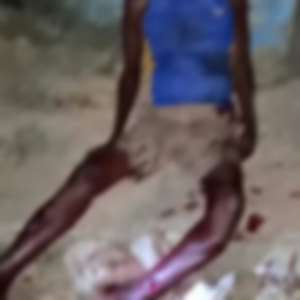 A 38-year-old man Kwesi Nimako alias Kwesi Biiko, is in the grips of Bogoso Police, after allegedly inflicting some life-threatening machete wounds on his father at Pemeso, a farming community in the Prestea Huni - Valley Municipality of the Western Region.

Egya Amoaning, in his eighties, who suffered several cuts on the chest, legs and arm was rushed to the hospital after the incident Tuesday night 1st March, 2022 around 9:30pm, during power outage in the community.

The unfortunate spectacle has since Tuesday night thrown the community into a state of shock.

When this reporter got to the community Wednesday morning 2nd March, residents were seen gathered in groups, obviously discussing the matter.

Narrating the incident, Ama Kesewa, junior sister of Kwesi Nimako said, his brother used stick to hit the father several times until he became weak before using the machete on him, adding, she cried at the sight of his father.

She said her brother had carried out similar acts on her prior to the current one that has landed him in the hands of the police.

She explained that, “the other day he hit me many times on my knees with a pestle without provocation, this rendered me bed ridden for months. I had to seek for care at Bogoso before returning to Pemeso”.

Ama further stated that, his brother had always threatened to kill the father so he could take over his cocoa farm, and though reports were made to the police, he always escaped arrest.

“He has no tangible reason in wanting to eliminate our father. All what he has been saying is that, he wants the cocoa farm of our father which clearly is for all of us and not only him”, Ama Kesewa told this reporter.

On his part, the Pemeso Committee Chairman Mr. Abraham Agyeman, who helped in sending the octogenarian to the hospital, in an interview, pleaded with the police to deal with him accordingly.

Kwesi Nimako who bolted after his heinous act was later apprehended by the irate youth in the community Wednesday morning and handed over to the police.

By the time of filing this story, Egya Nimako had been referred to the Komfo Anokye Hospital.