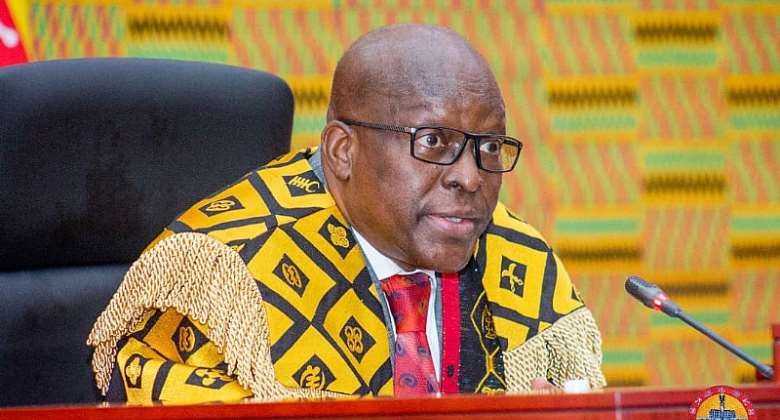 In an article shared on his Facebook wall, Sir-Obama Pokuase, a vociferous social media activist of the ruling New Patriotic Party has descended heavily on the posturing of the Speaker of Parliament.

Read below the full article

"Since his election as Speaker of Ghana's Parliament on 7th January, 2021, the Rt. Hon. Alban S.K. Bagbin's posturing and utterances in and outside Parliament has been one that protrays him as a typical black man intoxicated with power. He appears to enjoy controversy in whichever shape or form.

Latest of such is the leakage by his office, a confidential memo from the military high command withdrawing four (4) of their personnel who were "improperly" assigned to him for security protection. Although the letter states the reason (lack of proper procedure) for the withdrawal of the four soldiers, and assures the Speaker of its preparedness to regularise their [soldiers] attachment, it [letter] was leaked to NDC apparatchiks who have since then sought to create an erroneous impression that the Speaker's security has been thrown to the wind - a calculated move aimed at courting disaffection for this government.

Conducts such as this breeds mistrust amongst the legislative arm of government and the military high command, and erodes public confidence in the military establishment. Isn't it striking that under Bagbin's watch, the once respected august House has witnessed three separate fights amongst Members of Parliament? Clearly, Bagbin's leadership leaves much to be desired.

Speakers Justice Daniel Francis Annan, Peter Ala Adjetey, Ebenezer Sekyi-Hughes, Joyce Bamford-Addo, Edward Doe-Adjaho and Professor Aaron Mike Ocquaye conducted themselves in a way that earned the respect of both Members of Parliament and the general public.

None of them stood anywhere, at least publicly to say s/he is Number three (3) most important person in Ghana, and that s/he can cause the President (Number one) to be removed from office as and when he pleases.

On the substantive matter, it is important to put on record that the predecessors of Bagbin under the fourth republic had no military attachés. It's intriguing therefore the current Speaker's decision to at all cost have military protection in addition to his already assigned Police guards.

The laws of Ghana are clear, to the extent that three (3) high ranking government officials, albeit special circumstances are enjoined to have military guards. These are the President, Vice President and Minister for Defence.

If Speaker Bagbin is impatient and cannot wait for the military high command to regularize operations of the personnel attached to his office, he is free to request the police to increase the numbers for him. This crippling culture of individuals wanting to use military protection instead of the regular Police must not be entertained.

The writer is Sir-Obama Pokuase, a social media activist. You can contact him via email: [email protected]