The Mystery World Of Puppets And Puppeteers

…Who Controls the Puppeteer? Who Manipulates the Puppets of our Lives? And Who Really is in Control of our Physical Lives?
By Magnus Naabe Rex Danquah 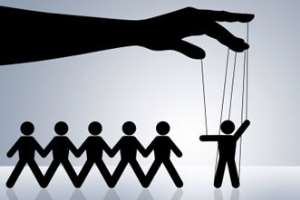 RELATIONSHIP, of any kind, is the original networking application originated by the Supreme Creator of the entirety of LIFE itself from the beginning of time.

Relationship is the fact or state of being related, connected by blood or marriage or code or on the basis of need or philosophy or creed like politics or society or club or work. It could also be emotional, especially sexual association between two or more people; or a condition or character due to being related by membership of a society or club; and kinship.

These also constitute the basis for the evil intents of the human being, he or she, for the manipulation of the other person in all these relationship setups, including marriage or politics, knowing that the scenes and demands of marriage is more than in politics, as both and in all relationships, there is the inclination of some element of manipulation – management, handling, controlling, maneuvering, influencing, exploiting, directing, juggling, rigging, doctoring or fiddling with an intent.

All these form the basis for a ‘Puppet’ and a ‘Puppeteer’ relationship, where a PUPPET is considered a hand-puppet, finger-puppet, glove puppet, doll, marionette or string puppet, figure-head (simpa-panyin), cat’s paw, pawn, dupe, hireling, yes-man, sucker, stooge or front-man because that is how mankind has molded life here on earth for dog-eat-dog situations, as the weak in character within the society always suffers.

The question I will pose for you is: Whose ‘PUPPET’ or ‘TILATI’ are you?

Who have you been manipulating as a ‘PUPPETEER’?

How come you can’t be discerning enough to read between the ‘LINES OF LIFE’, especially where your Creator chose to empower you with a FREEWILL, total liberation, and yet you would opt to place yourself under bondage of any type or sort?

It is important to appreciate that, a puppet is an artificial figure representing a human being or an animal, manipulated by the hand, rods, wires, etc., on a miniature stage; or a puppet is a person, group, or government, whose actions are prompted and controlled by another or others.

It was not for nothing that, we are all individually born with our own specific destinies, dreams, aspirations, plans and futures, so why should we subject ourselves to diverse and numerous manipulations by systems, individuals, governments or political party leaderships or occults, sects or triads?

How can we fulfill our DESTINIES when we allow others to make ‘PUPPETS’ of our lives and miss the whole essence of why we are here on this earth, especially where our CREATOR gave to each one of us his or her FREEWILL, only for us to allow ourselves to be subjugated by another for whatever reasons and benefits?

Why should we allow ourselves to be made willing PAWNS, STOOGES, MOPPETS, FIGUREHEADS, VICTIMS or INSTRUMENTS or PLEASURES of another, or worse ‘SIMPA PANYINS’ for all the gifts and talents our CREATOR endowed us with?

When we go to the polling stations every four (4) years to vote, we go through the processes by ourselves without our ‘PUPPETEERS’, so at that point, why don't we allow our own consciences to speak to us to take independent decisions as to who offers us the best future and not so much as to party affiliation, particularly where when they come to power by our votes, they forget us and rather they build walls around themselves to become incommunicado?

Do you know that those who we vote for, both the New Patriotic Party (NPP) and the National Democratic Congress (NDC) together could be equal to or less than the third group of those who do not vote at all at each elections in the 4th Republic? This means that there is a possibility of a true protest vote in Ghana, of those who want real change in our national body politick and choose not to vote. This group obviously believe the smaller parties (who by themselves are seen as appendages or puppets of the two main parties) are not-fit-for-purpose vehicles, individually or collectively, to articulate the change we desire so continue to play ‘puppets’ for the benefit of the political class.

The irony of all these is that the real registered members of good standing (paid-up dues) of each of the two main political parties are about five hundred thousand (500,000), thus the about six million votes that they get at the polls to influence our destinies are all ‘sympathy votes’, whilst about four million other Ghanaians registered also end up not voting at all during elections.

Let us therefore just pause for a moment and ask: ‘WHO REALLY IS IN CHARGE OF OUR INDIVIDUAL OR COLLECTIVE LIVES as “PUPPETEERS OF LIFE’, playing ‘god’ over our lives?

Understand this that, when ESAU on his own volition gave up his INHERITANCE, FUTURE, DESTINY or RIGHTS to his brother, JACOB over a bowl of pottage, it wasn't just for himself alone but knowingly or unknowingly, he MORTGAGED THE DESTINIES, FUTURES AND LIVES OF ALL HIS DESCENDANTS into perpetual servitude by just that one single act of satisfying his hunger for a moment and not for a lifetime. Thus, if you accept money to influence your conscience to vote for any presidential candidate, especially those who do not fulfil their words to the electorate after saying ‘test or give me the chance or opportunity and see the wonders I will execute for you.

This, for me, is a food for thought, for if we walk into servitude by ourselves, if we allow others to become our ‘puppeteers’ as we turn ourselves into ‘PUPPETS OF LIFE’ without any grounding or faith in any belief system of our own, then there is no REDEMPTION for us, now or in future and including our descendants for the four years in power, while we will subject ourselves to all manner of ‘mis-rules’ laced by personal aggrandizements of family and friends.

We ought to be mindful that if, knowingly or unknowingly, we mortgage our destinies, futures, lives or rights as ‘citizens and not spectators’ to any political ideology, we will end up being told that there are no opportunities in the public or civil service for us because there is no vacancy and yet the next moment they create positions in the same system for their children and relatives.

No GHANAIAN by birth or adoption, mindful of his or her heritage, should willfully, or even by any coercion, allow himself to be made into a PUPPET for good reason, otherwise why did we fight and sacrifice lives, shedding innocent blood for our Independence on 6th March, 1957? Why the ‘KUMPREKO’ demonstrations and others with loss of lives? Why allow our children to be shot and die during elections time, whilst nothing is done about the law being applied? Why vote for people who only fraternize when they want our vote, use the same ‘trotro’ we use daily to secure our sympathies to vote for them and yet after annexing the power, build a hedge around themselves for them not to now see the filths in our neighborhoods or erratic power supply that we were warned not to label ‘DUMSOR’ because they are not the same as previous government’s?

Imagine for a moment, the extent of the power we will wield as a people if we could change governments after just a TERM IN OFFICE of four years, guarding the ballot boxes with our dear lives and overseeing the ballot counting to reflect our real intents and not as manipulated, how each government will catch a cold, even when we mistakenly sneeze? Definitely, the emerging situation where these parties are now taking the two terms of office for granted should be a thing of the past, much more anybody desiring to ‘break what eight’?

The supreme power of individuals into a collective to select alternates should never be lost on the people when that is the basis of multi-party system – the right to choose whoever we desire as a people and a nation and not one that turns us into ‘puppets’, even when they don’t honour their words of promises made during campaigning; preaching one thing and to act differently for personal, selfish interests.

There is a lot of dignity in refusing to be a puppet, not allowing oneself to be manipulated or enslaved to dogmas than those rights and privileges, which are our due as enshrined in the Fourth Republican Constitution and promulgated at the advent of this dispensation.

Better still, are you a ‘PUPPETEER’, a direct beneficiary of the kind of politics we now practice?

WHO ARE YOU MANIPULATING, knowing that we are only tolerating you for a term as the emancipation process we are seeking for ourselves will ensure we do not repeat the mistakes of the past and voting parties for two terms, when in reality they only deserved just ONE TERM OF OFFICE and nothing more.

Remember, the advent of the HUNG PARLIAMENT with its attendant emerging experiences and lessons, requiring the need for the two dominant parties to begin to work together in the supreme interest of the people and our nation, Ghana? Who tells you that the Creator of the Universe does not sometimes interfere in the affairs of men, specifically when the people have become so stubborn as if they have stuffed their ears with cotton wool not to hear the incessant cries of the people for deliverance?

I know many, who in private discussions would admonish the political system at any point in time but the next moment, you hear the same person on air defending the same system to the high heavens, so permit me to ask: why are we so scared of telling the truth to power or standing up for the people and why all this silence, whilst between ourselves we admit to each other how things are very bad or worse than before?

This is a civic responsibility, let your vote count henceforth as CHANGE IS GONNA COME – sooner than later, when no government is assured of a SECOND TERM, unless they seriously work for it assiduously and without fail in all aspects of governance, particularly creating jobs for our people and not for family and friends.

FINALLY, please permit me, with all respect, to assure you that: there is NO DIGNITY in playing ‘PUPPET’, definitely not for the sake of your children, family, friends and people (most importantly for those in the neighborhoods), who look up to us as ‘ICONS OF HOPE’; that is why we should begin to stand up for the rights of the masses as the parties, themselves have continuously promised under their own manifestoes - nothing more, nothing less.