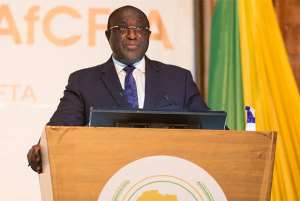 After all the well-choreographed and well-staged credibility crisis management Conference and well-paid media hype, the fact still remains that, Alan Kyerematen, a founding member of the NPP, who for the sake of unity and peace, willingly and magnanimously conceded victory to Nana Addo at 2007 Legon Conference, when Nana Addo couldn’t make the required 50%+1, is the undisputed leading presidential aspirant in the run up to the NPP presidential primary, with bulk of his support chiefly coming from the grassroots. “Yenim no firi tete” they say!

No wonder thousands of delegates from across the country walked for him on the streets of Kumasi on the day of the conference. They just love him, and see him as the one with the magic wand to industrialize Ghana to chase unemployment to the fringes. Not only that, they also see him as the one who has the political maturity and experience to unite and rebuild the party after the Congress, to make it more attractive and stronger for victory in 2024. The common mantra often heard at the grassroots is “It’s Alan’s Time” Indeed, it is his time to lead the party he penned his signature for its formation.

The NDC have always targeted 30% of the Ashanti Region votes and, 2024, wouldn’t be different. They believe that with 30% of Ashanti votes, they can easily win the presidential election. And, there is no gainsaying that, with Alan Cash as NPP's candidate, they can’t even make 20%. Of all the potential aspirants, Alan Cash is the one who can inspire a mammoth voter turnout in favor of the NPP in the region. This can’t be disputed by any objective political analyst.

The region’s political mystery became even more apparent in the 2020 elections. In the elections, the NPP performed woefully in the parliamentary elections. They shockingly lost 9 seats to the NDC, but surprisingly won the presidential votes.

Not only that, Alan Kyerematen can also win for the party massive votes from the 71.2% Christian Community in Ghana than his main competitor, Alhaji Bawumia. One doesn’t need to be Einstein to know and understand this. This needs no debate. Every political party would necessarily need the Christian votes to win the presidential election in the country. That Community, with its 71.2% population, is simply indispensable. Perhaps we need to ask Nana Addo why he chose “The Battle is the Lord’s” as his campaign slogan.

Again, Alan Kyerematen stands a better chance of rallying the youth behind him than his main competitor because of his track record in job creation, vision, message and his consistent political slogan “Jobs for the People, Cash for the People” It is often said that sweet talks don’t put money into one’s pocket; only jobs do. Ghanaian youth need two things – Job and money. And, who can better assure them these two needs than Alan Cash.

The youth would trust his promise because he has a good long-standing job creation track record to back his words. You can say he has not been tagged a liar, so, the youth wouldn’t find it difficult to trust him. Trust is key in politics.

Besides, we all know for a fact that Alan Kyerematen is the Ghanaian women's man. They love him to the hilt, particularly the traders and market women. A very few women wouldn’t want an intelligent, humble, hardworking, well-behaved, trustworthy man with a towering personality. This is undisputable. He stands a better chance of rallying the women behind him for massive victory than his main competitors in 2024.

Added to the above, he stands a better chance of rallying the Business Community behind the party for victory. It is a common knowledge that, as a result of covid and, other related factors, the Business Community in the country is going through turbulent times. Therefore, who becomes the next president is of utmost importance to them.

Simply put, Alan Kyerematen is the only candidate that can get us the numbers from the various dominant groups or communities to win the 2024 elections. It is highly unthinkable to suggest or claim otherwise.

Politics is a game of numbers! Therefore, the best way to look at it, is to look at it from comparative advantage perspective. That is why I want to ask the Tolon MP, Alhaji Habib Iddrisu, who told the Northerners to vote for Dr. Bawumia because he is a Northerner and Muslim, this question: In terms of numbers, what advantage would the NPP have over the NDC for presenting Dr. Bawumia as the party’s candidate?

The NDC, already have a superior advantage over the NPP in the North and the Muslim Community. In the last elections, they beat the NPP squarely in the North and Muslim Community. In fact, the NPP lost in all the Zongos in the country, despite providing them with Zongo Development Fund, Zongo Development Ministry and Zongo Vice President. So, what advantage would Dr. Bawumia personally bring? That’s a question for reflection!

The channel we used was the same channel Joy FM used to get ...
23 minutes ago