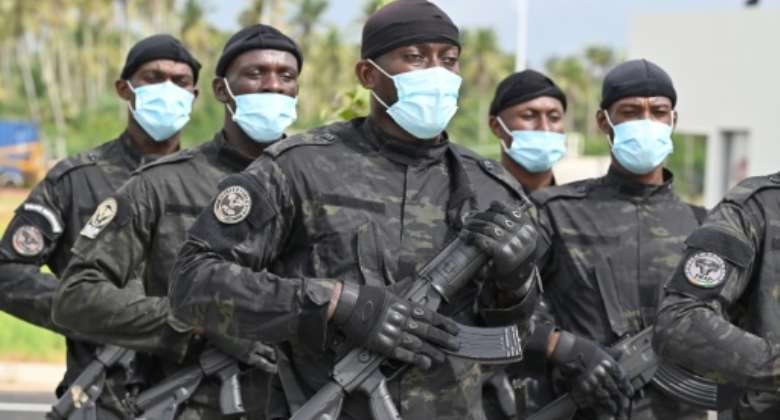 Show of strength: Ivorian troops at the inauguration of the International Academy for Combating Terrorism, which opened in Jacqueville in Ivory Coast in June. By Issouf SANOGO (AFP)

Jihadist insurgents wreaking havoc in the Sahel are pressing ahead with a long-feared push toward the Gulf of Guinea, hitting Benin, Togo and Ivory Coast, experts say.

Their campaign on the edge of the Sahara, starting in Mali in 2012 before spreading to Burkina Faso and Niger, has claimed thousands of lives, displaced two million from their homes and inflicted crippling economic damage.

But a string of border raids on countries to the south of the Sahel has confirmed suspicions the jihadists aim to advance toward the coast, said specialists at a two-day security forum that ended in Dakar on Tuesday.

The push "has been visible for several months in the armed attacks in northern Ivory Coast and several days ago with the first attacks on the Benin armed forces," said General Michel Delpit, in charge of France's military contingent in Senegal.

"The risk that we are increasingly seeing is that what is happening in the Sahel will move to coastal countries," the UN's special envoy for West Africa and the Sahel, Annadif Mahamat Saleh said.

"This is only the beginning," a top African official said, speaking on condition of anonymity. "It will continue, and accelerate."

It helps create new supply lines for food and equipment and unlocks new sources of income from banditry and economic crimes.

Compared to the bloodshed to the north, which has sometimes seen scores of fatalities in hit-and-run raids, the attacks have been infrequent and the toll minor.

Last Thursday, two soldiers in Benin were killed when a military post near the border with Burkina Faso came under attack.

Four members of the security forces have died in several attacks or roadmine blasts in northeastern Ivory Coast this year. Fourteen Ivorian solders were killed at Kafolo in the same region in June 2020.

But there is near-certainty that the jihadists' infiltration in the region is already at an advanced stage, the experts said.

"Violence is the final phase of the cycle," said Alain Antil, head of the Sub-Saharan Africa Centre of the French International Relations Institute.

"When you see it (the violence) erupt, it is actually the outcome of them having been in the area for at least a year.

Displaced: Belem Boureima, a 74-year-old farmer, is among 1.4 million people in Burkina Faso who have fled the violence. By ISSOUF SANOGO (AFP)

"They've been looking for allies, studying the area, detecting weaknesses, resentments between certain ethnic groups or towards the state."

"For example, to herders who do not feel protected by the authorities, they will offer protection against the use of their land by other communities which enjoy government protection," Antil said.

A European diplomat said: "The metastasis has begun and has probably spread more than we think -- and more than the governments in these countries are ready to admit, at least publicly."

Bakary Sambe of the Timbuktu Institute thinktank in Mali said the Gulf of Guinea countries initially felt safe from any such advance from the distant Sahel.

"Unfortunately they are in a culture of denial," he said, noting the potential impact on their continuing ability to attract foreign investment and tourist dollars.

The coastal states began organising a response four years ago with the so-called Accra Initiative, under which Benin, Burkina Faso, Ivory Coast, Ghana and Togo agreed to step up security cooperation.

Togo has recently passed a law to boost its military, Ivory Coast and Burkina Faso have carried out several joint operations in recent months, and Ivory Coast has just pushed two planes to boost its capacity, said Pierre-Elie De Rohan Chabot, a researcher with the International Crisis Group (ICG).

Last month, according to Burkina Faso, joint operations by 6,000 Burkinabe, Ghanaian and Togolese troops killed dozens of "terrorists" and led to hundreds of arrests.

Countries on the Gulf of Guinea have stepped up military cooperation in the fight against jihadists, but experts say prevention starts with tackling social and economic problems that feed the insurgency. By Issouf SANOGO (AFP)

But Sambe said countries had "missed the boat when it comes to preventing (attacks)."

Poverty, lack of infrastructure, weak institutions and ethnic resentment are the sources on which jihadists feed, he said.

"In the Sahel, the focus has been on fighting terrorism using military means to eliminate targets, but this ignores that they can regenerate," he said.

Antil pointed to the risk of "micro-conflicts" that the jihadists fanned into a wider war.

"In certain cases, if the state intervened (in these smaller conflicts) on time, they would get resolved," he said.

The European diplomat hoped 2022 would unlock plans for "a kind of 'social barrier'" to impede the jihadists' advance.