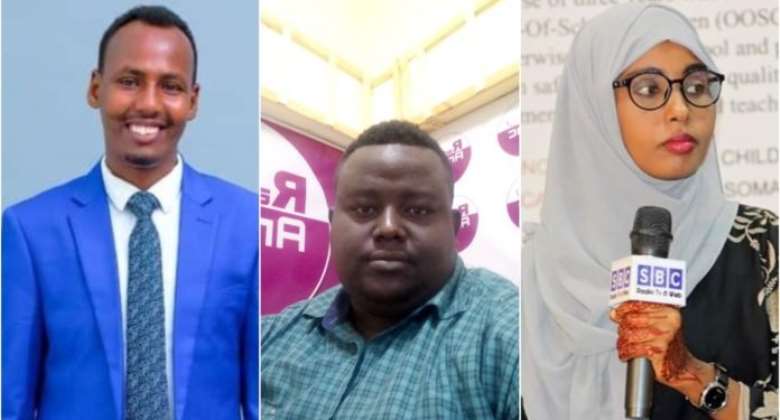 Somali Journalists Syndicate (SJS) condemns the recent arbitrary detentions, threats, intimidation and obstruction of access to information against local journalists in Qardho and Mogadishu by the police. We also call for investigation into the shooting of journalists’ flight in Garbaharey.

On 24 November, Mogadishu’s Hodan district police officers blocked and even used a live bullet against a group of journalists from local media houses who were covering a suicide car bomb in Hodan district. The officers who were securing the site threatened to shoot journalists if they did not leave forcing reporters to leave instantly out of concern for their lives.

On 26 November, Puntland police in Qardho detained Qardho Media journalist and editor, Mohamud Abdirisak Osman and Guled Abdirisak Nur Kibonge , the director of a privately-owned radio Anfa in Qardho for airing and conducting interviews deemed critical to Puntland president, Said Abdullahi Deni’s move to fire the director of Puntland Security Force (PSF) which sparked a security tension in Bosaso town. Both Osman and Kibonge told SJS, upon their release, that they were initially held at the Qardho police station where police officers beat them with wooden sticks before they were transferred to the Qardho central prison on Saturday 27 November without charge.

On Wednesday 01 December, police officers presented Osman and Kibonge to the Qardho District Court where only a judge, several police officers and clan elders were in attendance. Both Osman and Kibonge told SJS, that without a lawyer representing them, they were forced to sign a document allegedly prohibiting them from reporting “any information critical to the state in the future”. Both were freed without charge on Wednesday.

On Monday 29 November, armed police officers led by Qardho police commander, Omar Hirad Katun, raided the home and the office of Habibo Ladan Abdi Ibrahim, a female journalist reporting for SBC TV for her coverage on the residents of Qardho commenting on the security tension in Bosaso. According to Habibo Ladan, the officers were attempting to arrest her but after failing to find her, the police commander called her and threatened with ‘actions’ over the phone. She remains in hiding.

On Tuesday, 30 November, a domestic flight carrying journalists – many of them SJS members – was sprayed with bullets from the ground as it nearly landed at Garbaharey Airport in Gedo region. Under the invitation of the United Nations, the journalists were travelling to cover the droughts-hit communities in the region. According to interviews with affected journalists and media reports, the flight, which also ferried humanitarian workers made an emergency landing back to Mogadishu. Garbaharey Airport is secured by Somali government forces.

“We condemn the threats, intimidation and blockage against journalists in Mogadishu and Qardho including the direct threats by Qardho police chief targeting SBC TV journalist, Habibo Ladan Abdi. We call Qardho authorities to immediately intervene and hold their police officers accountable for threatening journalist Habibo Ladan Abdi. No journalist should live in hiding and no police officer should exercise above the law,” Abdalle Ahmed Mumin, the Secretary General of Somali Journalists Syndicate (SJS) said.