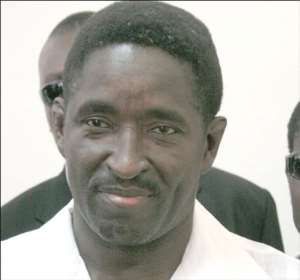 About two to three weeks ago, I was in the office behind NPP Headquarters, Asylum Down, Accra when a very good client walked in, his story was so bizarre that I asked the senior in our law firm to come and listen.

He left Aflao at about 04:00 hours in a hiring car to Accra, about four passengers in all. At Agbozume, emergency police check point stopped them, saying that they are searching for arms and ammunition. They found none. Rather they took his small travelling bag to the far side of the road, then he remembered that he had his wife's GH¢9,000 in it so he protested for his bag.

He ended up at the Abgozume Police Station where the money in the bag when counted was GH¢8,000 and he protested loudly that no the money is GH¢9,000.

Mayhem broke out at the police station. Eventually he was made to write a statement and granted Police Enquiry Bail. Lawyer I want you to write protest petition to the IGP and CID boss…….

'Given my experience with the Police and the Courts and looking at my man, I told him “look here – I am giving you two options” the first is that put down some money and I will write to the IGP. He will read the letter, refer it to his staff officers and so on and so on”. Something may happen, nothing may happen.

Reader, my preferred second option is that what is GH¢1,000 to you? Consider it a bad dream and forget it and move on.

“No, no, no, Captain. Please write. How much do you want?” So I wrote and he sent the letter.

A week later he came, looking perplexed. “Captain the Police have charged me at Denu Court and I have been granted Court bail to reappear on Monday 29th November. Don't send any junior lawyer. I want you yourself……..”

But I had a little challenge. The man who was NPP Chairman from 1992 until my first team as MP for Berekum had died in Jinjini, my birthplace, and the funeral was 27th November. I had to be there.

Friday night I left Accra for Berekum, put in appearance at the funeral in my hometown and on Sunday I motored back to Accra. Before going to bed circa midnight I told my father in law's daughter to wake me up at 04:00 hours.

She did not bother. God rather woke me up at 05:00 hours. At exactly 06:00 hours, I left Kasoa – objective Denu. Oh God, the traffic!!! One full hour passed and we had not yet reached Mallam Junction. We took the N1-reader-terrible. By 08:00 hours we had not reached Tetteh Quarshie.

We finally cleared Accra behind us at about 8:45am, and started the highway dash. Within an hour we were at Kasseh (Ada Junction), passed JJ Rawlings house at Tefle with his nice commemorative executive picture in front and by 10 O'clock we were in Sogakofe along the 150 metre bridge spanning the River Volta.

When a lawyer is going to court outside, it is always a terrible experience. All over the country the courts start work at 09:00 hours, some of the Judges come late, other start at 9am prompt and some don't sit at all. The other day I drove all day Sunday to, Bolgatanga, go there around 2am and very early dressed up fast, rushed to Bolga High Court, only to be told by the Court Clerk at the ground floor. “Oh Captain. Don't run. The Judge is gone to Accra.”

Here was I at Sogakofe at 10 O'clock – one full hour late; going to Denu. Is the Judge sitting? Have they called my case? What is going on?

Presently we came to some police check point. I saw some extremely very cute female police officer, looking exquisite and very smart. I stopped my driver and asked. “Officer, good morning. How far are we from Denu?

Instead of she answering my question I saw a lanky looking woe begone male officer who volunteered unasked for information – Oh, Denue – Denu…..about 50 kilometers from here…..”

About three years ago a certain extremely angry fat woman stormed into my law office and stormed at us without ceremony Captain, if you don't talk to your man, I will take him to NOGOKPO for my money. I am giving you only one week, Captain….”

Nogokpo!! How powerful is Nogokpo? If somebody owes you why not let a lawyer write “Demand Notice” and follow it up with a writ of summons, of course charging you legal fees so that we lawyers can have some wad notes in our pockets…..

We arrived in Denu. Thanks to NPP politics, I have been to the Ketu South Municipal Capital countless times, and also as a lawyer to this High Court at least five times. Reader, I am not a stranger in Denu.

We easily made our way to the Denu Circuit Court, custom built.

I entered to see about three lawyers, police prosecution – the Judge fully robed with bibs wig and gown. A lawyer was on his feet, cross examining a witness.

I saw my client and asked him whether the case has been called and he said no. I relaxed. I picked his case docket and looked again at the charge sheet: statement of offence – conduct conducive to breach of peace…..”

The last time I handled a petty criminal case like this is over thirty years ago. “Conduct conducive to breach of peace” – a misdemeanor – petty crime. I straightened up and relaxed.

I asked the Police officer next to me – what is the name of the Judge?

To be honest I was impressed with the diminutive highly professional business-like manner he was running the show – soft spoken, very firm, no jokes his face very impassive. This man will get to the High Court bench very soon.

After a while my case was called. The prosecutor is not in court. We have to take date – 20th December 2021. Next case!!!

I parked my diary file and book, gave them to my law clerk rose up, bowed to my lord and left the courtroom

By 1:30pm we were back in the streets of Accra.