Thoughts Of A Nima Boy: Abdul-Rahman Odoi Discusses Bond Of A Mother And Kids: The Ben Carson Story 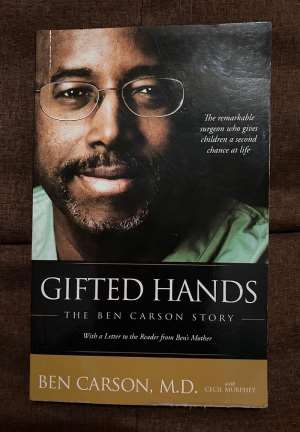 Few months ago, I discussed the movie adaptation book here after I led its video discussion with a group of wonderful young boys and girls at the ZongoVation Hub in Accra. The book, Gifted Hands: The Ben Carson story is a biographical piece on the life of the celebrated neurosurgeon, Benjamin Carson. It is a book that tells the travails the young Ben Carson went through to defy the odds and rise to the genius of today’s greatest life-givers that he became. A twenty-two-chapter page-turner that tells the inspiring story of a boy who came from a poor and humble background to become a professor of neurosurgery, plastic surgery, oncology and pediatrics and also the director of pediatric neurosurgery at Johns Hopkins Medical Institutions. The book shows how he started school from Detroit, was a laggard in class and later became the genius that he became through the efforts of his mum began restricting his (and his brother) television intake and required him to read books every week and write reports on them. Now that is the focus of our piece today. A reader at Success Book Club, Abdul Rahman Odoi, one of the enterprising young men I have met in this journey of literary and community activism discusses the bond between mothers and their children with the Ben Carson story in focus. Let’s savor and relish it together.

There is a litany of reasons I would love to encourage everyone, especially parents and their children to read and reflect on Ben Carson’s autobiography: Gifted Hands.

The truth is that this is the third book I’m reading since the commencement of the month of November. And I’ve not read the entire book; I’m only on page. However, I need to take a pause and run a quick gossip about some few excerpts.

In the prologue, there’s a heading called ‘A Letter from Sonya’, Ben Carson’s mother. She quoted: “You’re the captain of your ship”, a verse from Mayme White Miller’s poem called ‘Yourself to Blame’. This, she briefly explains — that no matter the hurdles in life — you don’t have to give up. Should you do and fall and fail, then you would have yourself to blame. I became abreast that the buzz the book had garnered is more than virtuous, and not even a bit circuitous.

Little Ben Carson was only eight years and had to get prepared for a perennial separation from his most beloved, Robert Carson, the dad. As a kid this storm will hit you hard in the face, soul, heart, and mind. I pray we all overcome the difficulties we are facing one way or the other.

But Ben pestered his mother: First, what I found interesting is his constant seeking of forgiveness on his dad’s behalf, albeit being privy to the degree of evil his dad had committed. My surprise is that the eight years him being innately aware that ‘to err is human, to forgive is divine’, and that he’ll be praying for his parents to reconcile whenever he went to bed. And not that alone, but him seeking forgiveness for his dad and knowing that there’s power in forgiveness makes me question myself and, even the temperament of our kids of today, who won’t even say ‘I’m sorry’, not until they’ve been bribed to do so.

At eleven years he had somehow finally gotten over the pains of his father’s absence. So probably his seeking of forgiveness for his dad had a three year’s span. This should tell you something — that Sonya Carson was raising her children on the principles of godliness. This was why, even as they had to barter their dignity for a better livelihood, they, the kids, didn’t give up on their mother. They joined hands altogether lovely.

We can now narrow this to our contemporary times and see the difference. I’ve seen many guys and ladies who have been blessed with one or two kids. But because they, the young parents, might have taken some detour from the right path, they ensure that their kids follow them in those crocodile paths as well. So you would see a guy who wears his trouser below the waist, goes clubbing all day, has tattoos all over and piercings, appears in some weird hairstyle with crazy designs, and all the vices they might have engaged themselves therein, imposing same on their innocent kids at a tender age.

My childhood friend, today, a ruffian, learnt how to smoke weed at Junior high. It was a fault of his father though, a weed smoker, who taught him the act. Is this fair? Today he causes a whole lot of uprising in the environ. He fights his dad at the least chance he gets. You’ve seen the difference now?

It is high time we understood that our kids come with a pure spirit just like Jesus (as) mentioned in Matthew 19:14. “…Suffer little children, and forbid them not, to come unto me: for of such is the kingdom of heaven.”

Sonya Carson believed that her kids needed a heart of gold. They were therefore put on godliness right away at infancy. Ben did confirm this when their mother told them that: “Bennie, we’re going to be fine.” Though there’s nowhere to sleep and what to eat they knew that their mother was relying on God, while she was putting things together.

Later, Ben and Curtis would testify that they let go of the vacuum of love their father had created, not because they were not hurt but the fact is their mother didn’t speak bad in his (their father’s) absence, or maybe not in their presence. Because forgiveness is pretty than vengeance, so to put it.

Again, this is rare. I’ve heard severally, mothers, not that they’re even divorced, but once their husbands got them irked, they’ll load lots of insults on their kids, accentuating any physical defects of their dads. Sonya Carson didn’t want to create that environment for his kids to become adults who’ll see their father as an enemy, or perhaps force them to take sides.

More so, the first chapter, “Goodbye, Daddy”, shows the powerful bond between the mother and her children. Last month while I was reading “Is God Good For Women” by Michele Guinness, the author mentioned that “Women tend not to be risk-takers, but when they do, it is often for the sake of others, rather than themselves.”

The above expression, Sonya Carson, a mother who didn’t have the best of education, got married at the age of thirteen (13) and was finally divorced and had to fight poverty to raise two strong boys should ring a bell that whatever she had gone through wasn’t an easy battle. The pain. The hardship. The sacrifices. And all that. But she came out victorious, with one of the best pediatric neurosurgeons the world has ever had and an aeronautical engineering. She is a kind-hearted and strong-willed woman.

Their success story is a gospel truth to children and, all single mothers who’re on the brink of losing hope. Please giving up shouldn’t be an option. Yes, the challenges can be as high as the mountains, but our perseverance, patience, and pure belief in God will make our exploits also as high as the skies.

In hindsight, whenever you see that children are fond of their mothers, as a father, or a potential father, or an observer, please don’t be jealous. Most often it is as the result of some of these selfless sacrifices mothers do make, at a time the father is nursing his sexual advances somewhere, which end up consolidating the unrivaled bond children have for their mothers.

Indeed, the cutting of the umbilical cord after childbirth won’t mean mothers don’t have control anymore. Rather, the heart of the mother to her kids can never be cut-off — it’s inextricable.

And beautifully, Ben Carson said: “For me to tell my story means beginning with hers.” Therefore, what I can also say is that divorce isn’t evil after all.

NB: The Writer is a Youth Activist and a Student of Knowledge.

One confirmed dead in youth, Police clash at Kotobabi Market
18 minutes ago