By Jan van der Made with RFI
Middle East 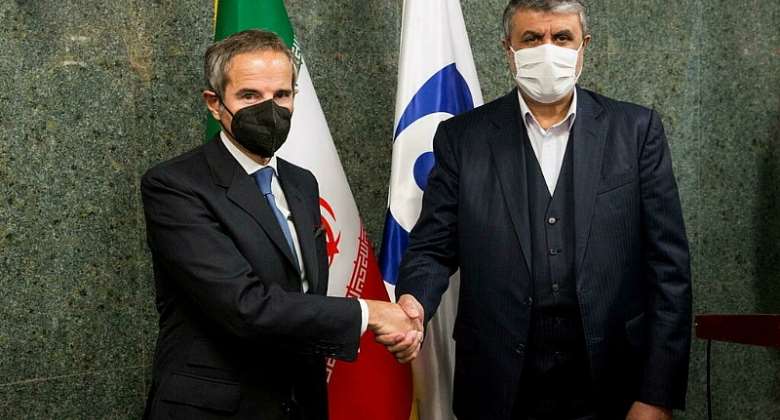 The head of the International Atomic Energy Agency (IAEA) began talks in Tehran on Tuesday, a week before the resumption of negotiations to salvage the Iran nuclear deal.

A day after arriving in the Iranian capital, the IAEA's Rafael Grossi opened discussions with the chief of the Atomic Energy Organization of Iran (AEOI,) Mohammad Eslami.

Resumption of negotiations
The talks come ahead of the scheduled resumption next Monday of negotiations between Tehran and world powers aimed at saving the 2015 deal, the Joint Comprehensive Plan of Action (JCPOA) that offered Iran sanctions relief in return for an agreement to limit its nuclear programme.

The JCPOA is an agreement between the five permanent members of the UN Security Council (The US, the UK, France, China and Russia) plus Germany.

"We have always advised the IAEA to stay on the path of technical cooperation, and to not let certain countries pursue their political orientations on behalf of the IAEA," he said.

Grossi's visit comes after the IAEA said last Wednesday that Iran had boosted its stockpile of highly enriched uranium to 2,489.7 kilograms, many times in excess of the limit laid down in the 2015 agreement.

Crippling sanctions
Iran began easing its commitments under the deal in 2019, a year after then president, Donald Trump, unilaterally withdrew the United States from the accord and began imposing crippling sanctions.

Trump's successor Joe Biden wants to bring Washington back into the agreement.

Tehran is demanding all sanctions imposed or reimposed on it by the US since 2017 be lifted.

The November 29 talks will be held in Vienna, where the IAEA is based.

The remaining parties to the deal -- Britain, China, France, Germany and Russia -- will join the talks while the United States will participate indirectly.

Meanwhile, reactions to the talks from Israel, that fears Iran's nuclear program most, are mixed.

The country's Prime Minister, Naftali Bennett said at the Security and Policy Conference at Reichman University in Herzliya that "even if there is a return to the JCPOA, Israel obviously is not a party to the agreement and is not obligated by it," adding that "After such a long period of time of investing in the Iranian threat, we need to look at what we've accomplished and examine if we need to recalibrate this vast effort."

But the Times of Israel, reporting on the event, quoted former head of Israel's Military Intelligence Unit Amos Yadlin as saying that Israeli policy on Iran's nuclear program over the last decade was decided personally by former prime minister Benjamin Netanyahu without consultation.

“The Iranian issue was privatized to one person,” argued Yadlin, speaking at the panel, adding that “the strategic discussions did not take place.”

He also said that the JCPOA deal of 2015 between Iran and six other countries including the United States kept the Islamic Republic from making meaningful progress in its nuclear program: “The mistake is not in 2015, but in 2018 when they left the deal in its good years.”