Tramadol and other substance abuse on the rise in Nandom 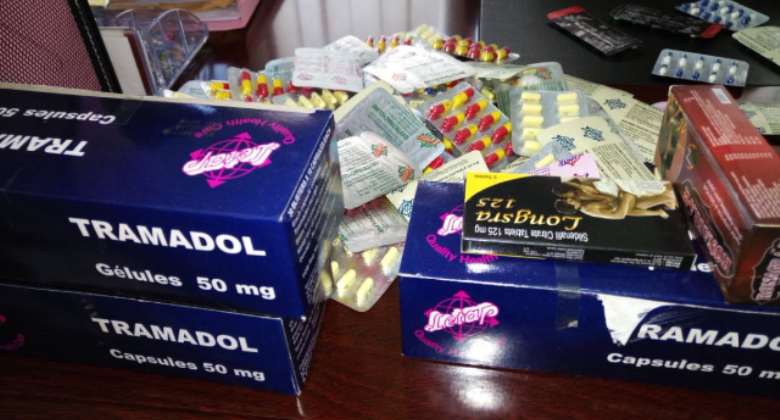 Nandom Municipality in the Upper West Region is noted for her discipline, hard work and high academic laurels. The municipality has uniquely carved an enviable niche for herself. This is a municipality that is dominated by peasant farmers. It is a non-cosmopolitan society that has commanded lots of admirable accolades across the globe. Again, the indigenes in this municipality are religiously inclined – Christianity is the predominant religion.

Our great grandparents wholeheartedly welcomed Christianity into the community, the reason why there are a lot of Rev. Fathers, Rev. Sisters, Rev. Brothers, Bishops, Monsignors among other higher leadership positions in the Catholic church across the length and breadth of this country.

The wholesome welcome of Christianity into Nandom by our great grandparents has birthed the St. Minor Basilica in Nandom. This Basilica was built with stones and it is one of the largest Catholic churches in West Africa. The missionary also championed and executed significant developmental projects in the municipality. These include educational institutions such as St. Michael’s Senior High School (Nandom SHS), St. Maria basic school, St. Cecilia basic school, St. Paul basic school, St. John’s vocational school, and many more. Again, the missionary did not only invest in education but also the health of the people. They built the one time very powerful and well-resourced hospital in the region - St. Theresa’s Hospital in Nandom.

This background narration is very essential for my readers to appreciate the high level of discipline and human resource development trajectory in Nandom. We all are not oblivious of the fact that development is anchored on discipline. A community that is not indisciplined cannot be developed.

Child’s upbringing in Nandom was a collective fight. Every elder in the society played a parental role in the training of children. Our traditional values complemented by the Christian values monumentally transformed and instilled discipline in the lives of the indigenes. Our grandparents were one another’s keepers. One could feel the love, care and unity that existed among our grandparents. This is the secret behind the disciplined attitude and hardworking spirit of the Nandom ladies and men.

It stands to reason that the love for one another and the collective spirited training of the young ones by our grandparents made Nandom a very peaceful and all-embracing community for people. It is abundantly clear that the spirit of togetherness and oneness was deeply ingrained in the lives of the elders. This is why social vices such as drug abuse, stealing, teenage pregnancy, armed robbery, disrespect, alcoholism, prostitution, fighting among others were alien in the land of Nandom until recently. Today, can we say we are the people they say we are? It appears we are only holding on to past glory without trying to raise or maintain the standard.

As it stands, one cannot beat his or her chest and compare the current state of Nandom to quarter of her state in some years back. The collective spirited fight against social vices and other odds has since been thrown to the winds. A new unproductive path of division, discrimination, selfishness, arrogance and pride has deeply engrossed the minds of many now. This new attitude has allowed evil and its destructive agents – envy, hatred, disrespect, arrogance, indiscipline to crept into the one time cherished and peaceful community called Nandom.

Today, the next generation to take over the mantle of leadership and champion the bandwagon of development in Nandom has discipline crisis. Many of the young ones now indulge in the abuse of drugs- tramadol, snuff, alchohol etc. Where do they buy these drugs? Your guess is as correct as mind; it may surprise you to know that people sell these drugs at their homes. It is highly possible. The accessibility of it makes it prevalent in the municipality. They buy these drugs, take it just to make themselves excited and active. As late as 12:00am, one can still find very young boys and girls on the streets of Nandom roaming round as though they gave birth to themselves. What could a small boy or girl be doing outside as of 12:00am? Do those children have parents, if yes, how responsible are they? We cannot afford to cast discipline and responsibility to winds and chart the familiar path of “I-DON’T-CARELISM”. Swift interventions need to be taken.

Again, it is worth noting though sad that drug such as snuff has become the chewing stick for the youth and most parents including both elderly women and men. One can confirm this by searching the pockets of the men, bags and the end of the women’s clothes they wear. Observe them at funeral grounds. There are a lot of myths surrounding the use of snuff by its users. While some claim it cures cold, headache and even malaria, others also believe that it makes them “high” and more productive. This is one of the most commonly abused-drugs besides the almighty marijuana (wee) and alchohol.

The trajectory of events unfolding in the municipality currently, spell doom for a successful succession plan after the present generation. Evidence abounds point to this prophecy I make though I am not a prophet. For evidentiary purposes, one can research Nandom performance in BECE from 2014 to 2017 and compare that with 2018 to 2020 results. There is an unexpected and unpardonable decline of Nandom performance in BECE. It is sickening that Nandom was ranked last in the Upper West Region several times. From 2018 to 2020, Nandom municipality has consistently and without shame found herself second from the bottom out 216 districts in the country. This is a major indicator that points to a bleak and sad future for Nandom if measures are not put in place to curb it.

Sincerely speaking, the youth of Nandom need to unite beyond political colours. Our elders do say that when spider-webs unite, they tie up a lion. When this is done, we will be able to wage a relentless war against these odds.

Beside a united youth front, the security services in Nandom can also help in the fight against this demon. They should embark on night patrols, arrest and sanction any young person roaming on the street at that time. Parents whose wards are found outside at that time should also be punished to deter others from being irresponsible.

The traditional leaders of Nandom should be encouraged to form community police in their respective communities to patrol in the night and arrest the situation.

Parents should live responsible and exemplary lives. They should check on their wards and ensure that they are properly trained.

Every one of us has a sacrosanct responsibility to ensuring discipline and progress in Nandom municipality beyond political affiliations. If we fail to unite and nib this challenge in the bud, then dark days are as certain as the day light ahead of all Nandome. This is my opinion as a responsible native of Nandom.