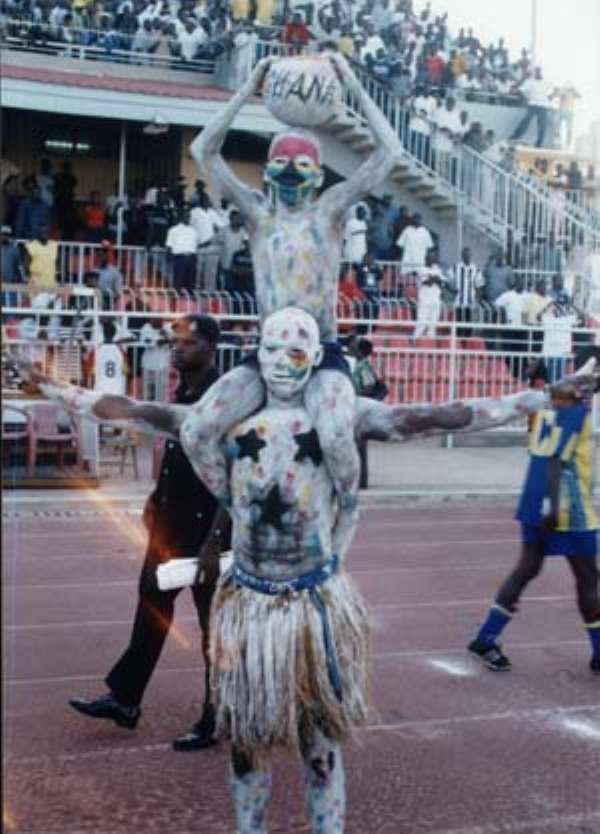 Kofi Akosah-Sarpong asks if juju/marabou, witchcraft and other African spiritual practices can be used for good purposes to bring comfort to millions of Africans just as the new microchips invented to help people see again That all development has its spiritual foundation has been amply demonstrated in this long-running column (perhaps the longest running column in the world). We all know by now how Western capitalist development was founded on the Protestant Ethic as sociologist Max Weber tells us in The Protestant Ethic and the Spirit of Capitalism. For the past 500 years or so humanity, the West especially, has advance remarkably in terms of living better, which is what all the so-called progress or development is all about. The West has done so not because they are extremely brilliant or incredibly wise but because they have the humility and skill in appropriating the good from other cultures into their own (For the past ten years I have been in living Canada and have traveled to most of the Western countries and from close observations, informed by my training as a sociologist, see how the West has advanced to this level). Aside from what I have seen in the West, some of my friends who happened to live in Israel tell me how the Israelis famed progress is based on strong spiritual foundation via their Jewish religion. I have a lot of Jewish friends here and I am always amazed how they are able to mix their spiritualism with material progress. For long time, I have been wondering why African elites, with their big mouths and good brains but “dark” hearts could not just copy from anywhere in the world and mix it with the superb parts of Africa's cultures. Why can't we use our massive juju/marabou, witchcraft and witchcraft to speed up discoveries and inventions and make the African live in comfort, more so as the world becomes closer and it is easy to see what others are doing? As a teenager, I used to visit my grandfather, the late Opanin Kwaku Akosah, popularly known in Kumasi as “See Before You Talk,” during holidays at Kwadaso Nzima, a village near Kumasi, the second capital city of Ghana. A woman who was working at the Kwadaso Agriculture College, which is on the lands of Kwadaso Nzima village, children were said to be doing very well compared with other mothers in the area. People attributed it to witchcraft. Come to think of it, why can't we use witchcraft to do well just like this lady and her children? Why still mired in the long-running pain, suffering and stupidity if witchcraft, juju/marabou and other African spiritual science can be used to live in comfort? The challenge today, ladies and gentlemen, is how to appropriate witchcraft and juju/marabou, and other African spiritual sciences, for that matter, in this way, if it is possible at all, to help in Africa's progress. In a way, we should bring juju/marabou, African spiritual sciences and witchcraft, if it is possible, into the development process. Just read the piece below from BBC online and see the remarkable research going on to help those who are blind to see. Can Africa's juju/marabou and witchcraft, including the continent's famed mystical powers, be used to breakthrough most of the complicated problems we are experiencing today in order to help solve some of our problems. Ladies and gentlemen, just imagine how comfortable it would be if African juju/marabou, witchcraft and other spiritual sciences could be used to let us live better--live in peace, eat well, drink good, sleep well, discover and invent products that will free us from backwardness. Read on and link it to the art of juju/marabou and witchcraft and other spiritual sciences. “Scientists are developing an electronic eye implant which they believe could help millions of people to see again. The microchip works by stimulating cells around the retina. This in turn stimulates cells in the brain, helping people to see once more. Tests on animals have shown that the tiny microchip can restore sight. US Government scientists, who are spearheading the project, believe they could have a human implant within three years. The microchip, which acts as an artificial retina, would be surgically implanted into the eye. The electronic device stimulates surrounding cells that have not been damaged. This enables sight to be restored. “The 4mm microchip is attached to a type of silicone called polydimethylsiloxane (PDMS). This substance is flexible and can conform to the curved shape of the retina without Researchers at the University of California, who are also involved in the project, have already successfully tested the implant on three dogs. They are now working with scientists at the Lawrence Livermore National Laboratory to develop a microchip that could be used on humans. The implant needs to be strong to withstand surgery and to be biocompatible - able to withstand the physiological conditions of the eye. The researchers are now working on what they are describing as a second generation implant. “This will have a greater number of electrodes and electronic chips. It will also be stronger to prevent it from curling or folding. The prototype implants contain 16 electrodes, allowing patients to detect the presence or absence of light. The artificial retina project's "next generation" device would have 1,000 electrodes and hopes to allow the user to see images. The scientists believe the implant could help people who are losing their sight or who are registered blind to see properly again. The project has received $9m funding from the US Department of Energy. Announcing the funding, Energy Secretary Spencer Abraham said: "Restoring vision to patients with retinal disorders is the truly marvellous goal of this team of researchers."