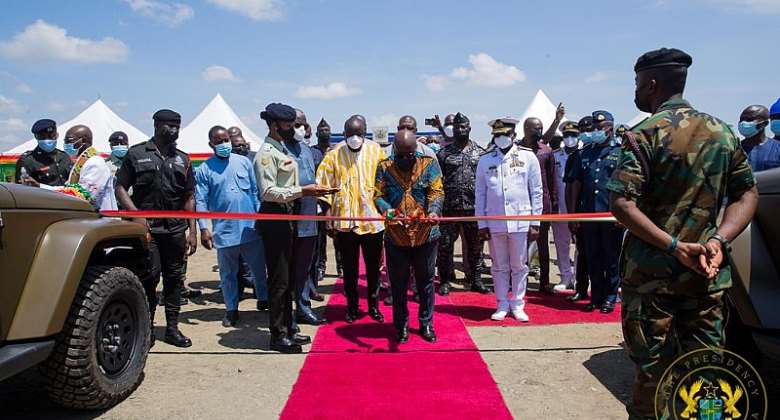 According to President Akufo-Addo, the vehicles will help the Army contain the security threats posed by extremist groups operating along Ghana’s northern borders, and also help them deal better with internal security challenges.

Speaking at the presentation ceremony on Wednesday, 27th October 2021, the President noted that these 50 vehicles are to complement the 73 armoured personnel carriers, 41 Toyota vehicles, 3 water tankers, 1 self-loading recovery truck, 1 refrigeration van, and 5 utility vehicles for waste disposal and management, he presented on 5th December 2019 and 31st March 2021.

He told the gathering that Government is constantly kept apprised of the needs of the Armed Forces, and, Commander-in-Chief, he is taking steps to ensure that they are met.

“We recognize that our vision of ensuring equitable distribution of development, progress and prosperity to all parts of the country can only be achieved in an atmosphere of peace and security. We are determined to continue in this vein, and satisfy the legitimate demands of the Armed Forces,” he said.

He continued, “There is no doubt that your success in providing the needed all-round security in the country has been made possible through your vigilance and sacrifices, notwithstanding the modest resources with which you have to work. Ghana is forever indebted to you”.

Prior to the presentation of the vehicles, President Akufo-Addo drove through the Ghana Military Academy Infrastructure Upgrade project site, and expressed delight that the project had progressed significantly, since he cut the sod for its commencement on 4th July 2019.

The Cadet Mess, the Square and lecture rooms are completed. The Administration Block is some ninety-five (95%) complete, and the contractor is in the final stages of completing the external works. The two hundred and forty-six (246) capacity Cadet Hostel and Platoon Commander’s Block are some sixty-five percent (65%) complete.

The President was also informed that the housing project, which is an integral part of the facility funding the Military Academy Upgrade Project, would see the Ghana Armed Forces adding eight hundred and thirty-two (832) units of 2-bedroom self-contained flats to its stock when completed, with the ones at Five (5) and Six (6) Garrisons also at various stages of completion.

“This project is costing the taxpayer some thirty-three million cedis (GH¢33 million). Undoubtedly, it will boost the image and morale of the Army, since the Air Force and the Navy already have very beautiful headquarters, and we cannot allow the Army to be left out,” he added.

The President also cut the sod for the commencement of work on the US$24.8 million housing project for troops.

He stated that 40 half compound houses will be built here at Burma Camp, ten (10) each at the Naval Base in Sekondi, the Airforce Base in Tamale, the 4th Infantry Battalion in Kumasi, and the 3rd Infantry Battalion in Sunyani. When completed, a total of three hundred and twenty (320) units would be added to the housing stock of the Armed Forces.

“As President of the Republic and Commander-in-Chief of the Armed Forces, I am fully aware that our economic development can only thrive in an atmosphere of peace and security. It will come at a cost, and against other competing demands. These notwithstanding, we continue to make systematic efforts to address the logistical and housing needs of the Armed Forces,” President Akufo-Addo said.

With the threat from the northern border not abating, he stressed that Government released funds last year to start re-tooling, reconstructing and upgrading fifteen (15) Forward Operating Bases and new units, including the ten (10) and eleven (11) Mechanised Battalions, one hundred and fifty-four (154) Armoured Regiment and one hundred and fifty-five (155) Armoured Regiment, and supporting logistics units.

“All these efforts of re-tooling and providing the necessary housing units, will enhance the state of preparedness of the Armed Forces,” he added.