The rise of Col. Mamady Doumbouya 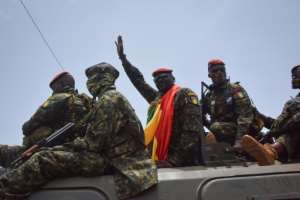 Guinea Conakry, one of the West African countries with a little over 13 million people which has suffered many coup d'etats over the years, has just suffered yet another one on the 5th of September, 2021 led by Col. Mamady Doumbouya, a Commander of the Special Forces of the Army created by President Alpha Conde to fight terrorism.

But some sources claim that Alpha Conde created the Special Forces unit of the army for his personal protection as he sought to win a third term which he eventually won anyway by altering the constitution to allow him run for two more terms as he had already been President for two terms from 2010 to 2020...

I think that Alpha Conde's greatest life's mistake is his decision to amend his country's constitution in order to run for a third term which has finally brought him shame and humiliation.

People who are saying that they do not support any coup d'etats no matter what should be sincere with themselves. How can the Guinean people sit down and watch an elected President turn into a dictator, change the constitution to rule forever, and suppress or kill people who protest this act and, yet you say the people of the country should not neutralize this tyrannical regime through whatever means including a coup d'etat? Aren't the military also part of the people and have a say as to what happens in the country?

The African Union and the Economic Community of West African States many times stand aloof or do nothing when elected Presidents on the continent scrap their country's constitutions and manipulate the system for their personal gains. Yet both associations cry foul when there are military takeovers.

Isn't it obvious that corrupt leaders in Africa have each other's back? The democracy they claim to practice is a manipulated one. They use democracy to gain power and then amend their constitutions to perpetuate themselves in power forever.

If they had any intergrity, they should be on the neck of sit-tighters like Museveni of Uganda and heckle them out of power. Unfortunately, they are rather telling Col. Doumbouya the new Head of State to return power to Alpha Conde who went against his country's constitution.

Democracy must operate under strict and uncompromising rules and the willingness to conduct a free and fair elections should be paramount and Presidents should have that discipline to handover power peacefully whenever their tenure of office is over.

Without these principles or tenets, you create autocrats and dictators who will use power for their personal gains. Guineans should use this opportunity to create the right structures and build what works in their own interest.

I see Col. Mamady Doumbouya as a young man who wants to impact his generation positively considering his reasons for the takeover, but my only fear is, he, later emulating the bad African leaders just like the one he just ousted.

Because some of these strongmen like Museveni came in all gung ho with blazing hot righteous anger and idealistic plans to make the world better, but when they settled down, they became the very thing they fought against. It has been a bane of African leadership on the continent.

But once Col. Mamady Doumbouya does not shed blood and loot public funds, but create working structures that will return the country to proper civilian rule, he will remain one of the heroes of Africa just like the great Captain Thomas Sankara of Burkina Faso. May he not be misled by ECOWAS and other corrupt entities.

So far, so good, considering the steps he has taken to normalize things in the country. He has also been sworn in as the interim President while they rewrite the constitution and handover power to a complete civilian government....