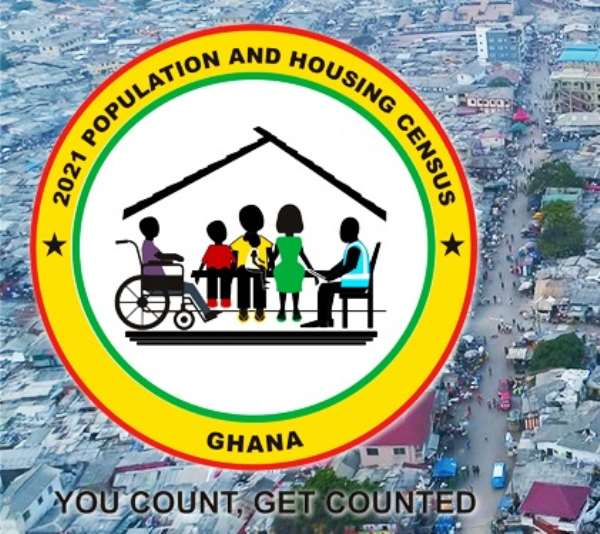 About the 2021 Population and Housing Census

The 2021 Population and Housing Census (PHC), Ghana’s first fully digital census, employed technology in all aspects of its implementation. It leveraged on technology available to improve operational efficiency, enhance the quality of the data collected and be able to release results in a timely manner. To learn more about the uniqueness of the 2021 PHC, visit the census website.

The 2021 PHC counted and collected detailed information on all persons that spent the Census Night, that is Sunday 27th June 2021, in the country (de facto approach). The initial enumeration period was from 27th June to 11th July, with a mop-up period, first for one week and subsequently extending it to 15th August in some areas with challenges. Prior to the Census Night, the listing of structures took place between 13th and 25th June, 2021. Structures listed were completed buildings, uncompleted buildings at various levels of completion above window level and unconventional structures (such as metal containers, and kiosks).

Scope of the Preliminary Report

This press release highlights findings from the 2021 PHC Preliminary Report which contains provisional results on population size and sex composition, population density, and structures by region.

In all, 8,345,414 households were enumerated, with an average national household size of 3.6 persons.

The national population density in the 2021 PHC is 129 persons per square kilometre. 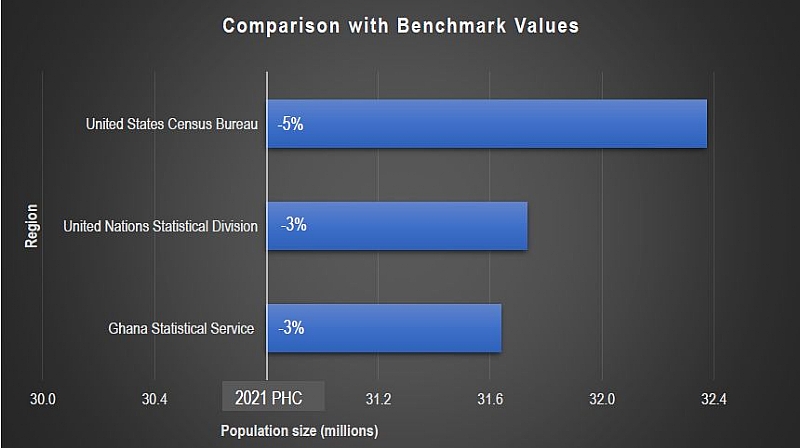 Population Changes Since the 2010 Census 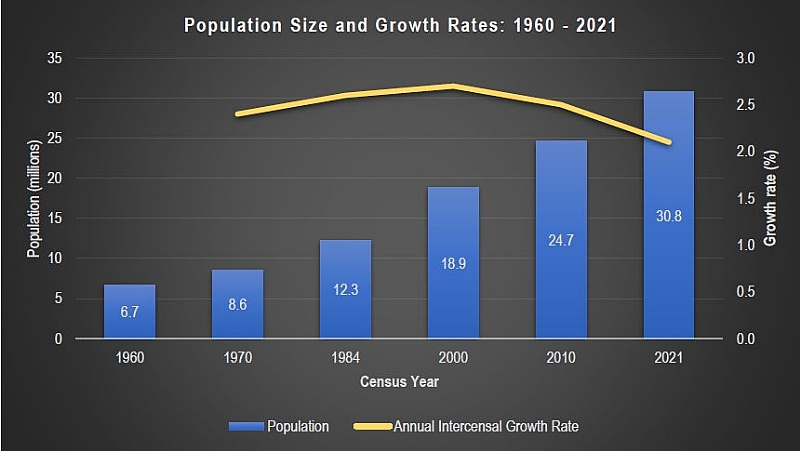 The population has increased by 6.1 million from the 24.7 million recorded in 2010, constituting an annual intercensal growth rate of 2.1%. This rate is less than what was observed in the previous intercensal period (2000 – 2010: 2.5%) and is the lowest observed since independence. At this rate, the country ‘s population will double within 33 years. And by 2050, the population of Ghana would be over 50 million.

The sex ratio of 97 males for 100 females in 2021 represented a slight increase over the sex ratio of 95 recorded in 2010. The 1960 census is the only post-independence census which recorded more males than females (102 males to 100 females) . Since then, sex ratios have declined until the uptick observed in 2021. Regional sex ratios in the 2021 PHC range from 91 males for every 100 females in the Volta Region to 105 males to every 100 females in the Western North Region, and these rates are consistent with the findings from the 2010 Census where the then Volta Region had the lowest sex ratio of 89 with the then Western Region recording the highest of 104.

The population density at the national level increased by 26 persons per square kilometre over the 103 recorded in 2010.

NB: For regional comparisons with the last census, the 2010 population figures have been reconstituted using the district populations recorded. 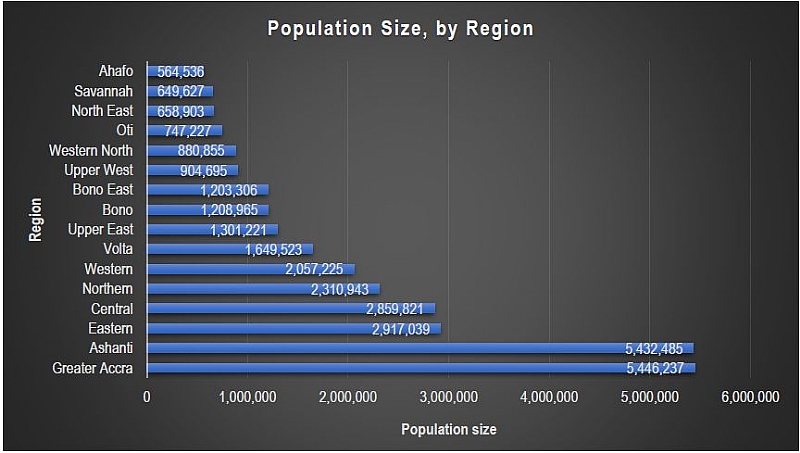 The current Northern Region observed the largest change in population with an almost 50% increase over its population in 2010. The two other regions that made up the then Northern Region in 2010, North East and Savannah, had the second and third largest intercensal increases (41.7% and 38.4%) respectively. The next highest change recorded was in Greater Accra with an addition of 35.8%. The Eastern Region, followed by the Volta Region, recorded the lowest intercensal change (adding 10.8% and 11.4% respectively to their populations). The range of these figures highlight the regional disparities in population change from the previous censuses. 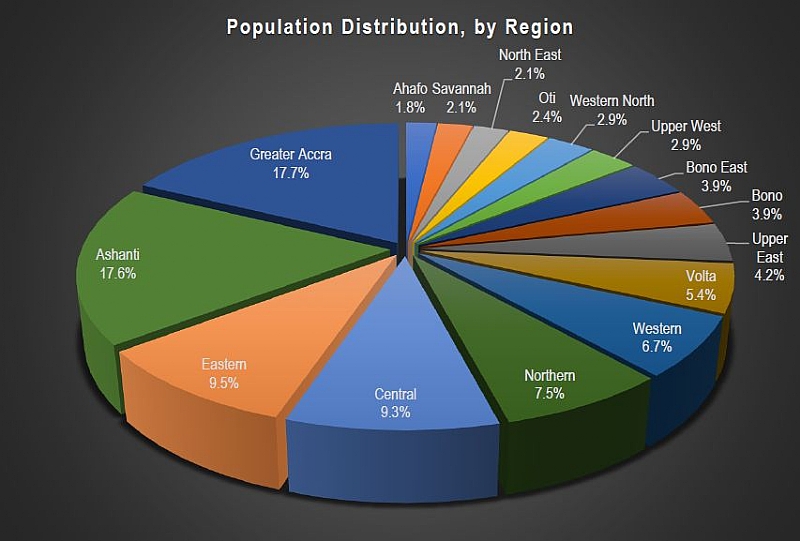 At the national level, the usage reported for six out of every ten structures (59.6%) was residential with the regional figures starting from just over half (53.1%) in the Western North and Bono Regions (53.7%) to almost three-quarters (73.5%) in the Savannah Region.

Note: information on usage of structures was not collected for structures at lintel level without roof, window level, or concrete/metal/pillars levels

The 2021 PHC instituted several data quality monitoring mechanisms and leveraged technology to implement interventions towards ensuring complete and accurate coverage. These included the use of GIS technology and geospatial resources, such as collecting the GPS coordinates of all structures, use of census dashboard for real-time monitoring and continuous data validation by Data Quality Monitors at the various levels of operations.

These strategies made it possible to continuously assess data quality and correct errors and inconsistencies while enumerators were still on the field. The approach, and with public sensitisation programmes, created an alert, enthusiastic and proactive public leading to avoidance of duplications and omissions as well as eliminating fabrications. Learn more about the 2021 PHC data quality assurance process in our pre-release fact sheet.

The technical documentation on the enumeration and data quality assurance procedures are available under the instruments and training materials section of the census website.

Only aggregated data is reported and is the norm for the rest of the results in accordance with the Statistical Service Act, 2019 (Act 1003). The Act places a legal restriction on publishing particulars on individuals. All personal details are protected and removed from all publications and datasets to protect the confidentiality of respondents.

The full preliminary report can be accessed online from the 2021 Population and Housing Census (PHC) at www.census2021.statsghana.gov.gh/dissemination.

Information on upcoming releases and data products are available in the 2021 PHC Product Release calendar which can be downloaded here.

Management of the Ghana Statistical Service expresses its appreciation to all Census Committees, Census Officials, Field Officers, Partners, the Media, Stakeholders, Respondents, and the General Public who participated in the census and looks forward to continued engagements during the dissemination phase of this important national activity.