2023: Eze commends Jonathan for rejecting the bite of the Northern Presidency Sour bait .

.. States that the move is a trick to deny the South her two terms after the two terms of the North through President Buhari
By Nwaorgu Faustinus || Nigeria 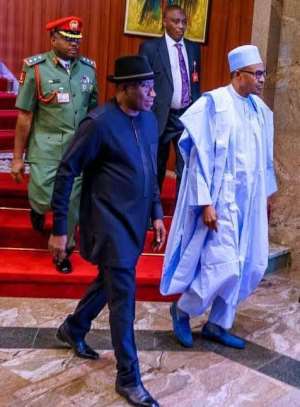 Having carefully perused through the series of articles on the deadly scheming of some Northern Leaders to lure former President of Nigeria, Dr. Goodluck Jonathan into the 2023 Presidential contest, chieftain of the All Progressives Congress and erstwhile National Publicity Secretary of the defunct New People’s Democratic Party (nPDP), Chief Eze Chukwuemeka Eze, has said it smacks of deceit for anyone or group to concoct interest over the reemergence of Dr. Jonathan as Nigerian President in 2023.

In a statement made available to media houses in Port Harcourt, the party Chief said the scheme is a trick packaged by some Northern leaders in order for Jonathan to be President for one term which would be the completion of the four years remaining of his tenure and retake power come 2027 thereby denying the Southern part of Nigeria a complete term of eight years.

Eze said that the Northern schemers knowing very well that with President Buhari successfully completing his second term by 2023, the South, in all honesty and fairness will produce the next President and so to truncate a southern eight-year rule, they intend to feature Jonathan who would reign only four years thus, throwing the 2027 Presidential election open for a fresh zoning arrangement and contest favourably to the North.

Eze urges all Nigerians to speak up and condemn such a dastardly act that may plunge this nation into unprecedented chaos.

Eze is consoled by the fact that Jonathan has rejected such a devious plot. I therefore commend him for his foresight, sagacity & wisdom by rejecting the bite of the Northern Presidency sour bait as this is a deadly trick to deny the South her two terms after the two terms of the North through President Buhari. This Plot is an unacceptable insult on both Jonathan and the entire southern political class as if we lack credible political leaders from the South that can turn the fortunes of this country around.

He said it is imperative to commend Dr. Jonathan for reading through the deceit of these leaders, trashing their dishonest entreaty and ensuring that his political feats and present status as a great promoter of democracy is not ruined, tarnished but kept intact by keeping these undemocratic elements at bay.

“I am very glad that Dr. Jonathan has done his best to keep these undemocratic forces at bay who are hellbent to deny the South the chance to preside over the affairs of this country according to the terms of power rotation between the North and South, not minding that the Northerners have through the military and Democratic dispensations, governed this country to their heart contents.

Funny and sad enough, same leaders who ensured that Dr. Jonathan was not reelected in 2015 are the same crop of leaders that are doing everything to lure him back to finish whatever that is left of him politically.

As much as I am not a supporter or sympathizer of Dr. Jonathan and his type of politics, as I was one of those who saw to him not been reelected, I will not seat and allow his haters drain the little integrity left of him.

Luring him to contest the 2023 does not in any way wash him off the sins and reasons behind why he was not reelected in 2023 but a careful ploy to portray the Southerners as lacking better and credible leaders to improve on the fortunes of the country.”

In this vein, the party chieftain commended Governor Nyesom Wike of Rivers State for insisting that he will not support Dr. Jonathan if he decides to contest the 2023 general election, not minding that he was instrumental to his imposition as the Governor of Rivers State.

If Wike, who Jonathan did everything to impose on the good people of Rivers State could reject him, Eze said he is very much convinced that if he succeeds to allow himself to be fooled by those luring him, the worse political defeat awaits him come 2023.

Eze counseled Jonathan to continually read in between the lines and avoid the deadly bait that will make both the North and South politicians to derign him further.

Eze further highlighted that Dr. Goodluck Jonathan who based on his Democratic feats earned through his handing over power peacefully to the incumbent President in 2015 unlike most African Leaders shouldn't allow any situation that will cause division and tension in the country because of this deadly plot.

This 2015 feat has earned him an international figure and he shouldn't allow himself to be rubbished and reduced to a local politician by these politicians that don't mean well for the unity of this country.

Eze postulated that Dr. Jonathan while in Mali urged the Malian transitional government to hasten the process of developing an electoral framework and the establishment of the priority actions needed to be taken in order to hold the presidential and legislative elections as scheduled. The Mali election is scheduled for February 2022.

Although the Mission appreciated the renewed expression of the transitional authorities to respect the agreed deadline of the transition before the international community, it however noted in its communiqué that it was concerned “about the lack of concrete action in the effective preparation of the electoral process.