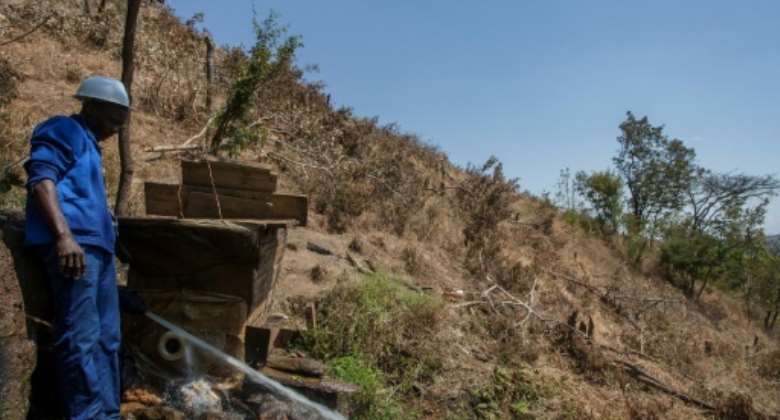 Green power: Colrerd Nkosi uses a pipe from a stream to drive a turbine salvaged from a piece of old farming equipment. By AMOS GUMULIRA (AFP)

Fifteen years ago, when darkness used to fall in Yobe Nkosi, a remote village in northern Malawi, children did their school homework by candlelight: there was no electricity.

But that started to change in 2006, when villager Colrerd Nkosi finished secondary school in Mzimba, some 40 kilometres (25 miles) away, and returned home -- and found he could no longer live without power.

Aged 23 at the time, Nkosi soon figured out that a stream gushing past the house where he grew up had just enough force to push the pedals on his bicycle.

He created a makeshift dynamo that brought power into his home.

Word spread quickly among the cluster of brick houses and neighbours began paying regular visits to charge their mobile phones.

"I started getting requests for electricity (and) decided to upgrade," said Nkosi, now 38, sawing through machinery on his verandah in blue overalls.

Nkosi's hydro turbine was scavenged from the motor of a machine designed to skim kernels from corn cobs. By AMOS GUMULIRA (AFP)

With no prior training, he turned an old fridge compressor into a water-powered turbine and put it in a nearby river, generating electricity for six households.

Today, the village is supplied by a bigger turbine, built from the motor of a disused maize sheller -- a machine that skims kernels of corn off the cob.

The gadget has been set up on the village outskirts. The power is carried along metal cables strung from a two-kilometre (one-mile) line of tree trunks topped with wooden planks.

The users pay no fee for the power but give Nkosi some money for maintenance -- slightly more than $1.00 (0.85 euros) per household per month.

Metal cables strung along the top of tree stumps take the power from the tiny hydro plant to the village. By AMOS GUMULIRA (AFP)

He admitted that the maintenance income was too small to cover repair costs, which he mainly funded from his own pocket.

Despite the challenges, he is determined to expand his mini-grid to surrounding areas.

"Once more villages and schools have electricity... people will no longer cut down trees (for) charcoal," he said.

Students "will have a lot more time to study," he said.

As dusk settles over Kasangazi Primary School, perched on an adjacent hilltop, chatty groups of learners file into a classroom for a night-time study session.

"Before we had electricity here, we used to use candles to study," said student Gift Mfune, sorting through a heap of text books on his desk.

"Now... we all have no excuse but to pass our examinations," he exclaimed.

Courtesy of Nkosi, the building is the only school with power out of 17 others servicing the area.

Only around 11 percent of Malawi's 19 million or so inhabitants have access to electricity, making it one of the world's least electrified countries, according to Sustainable Energy for All, a campaign group backed by the UN.

Just four percent of the southern African country's rural population is connected to power, compared to 42 percent in urban centres.

Local councillor Victor Muva pointed out that none of the constituency's more than 18,000 inhabitants were on the national grid.

He has been lobbying the government to help Nkosi expand his work.

The ministry of energy has promised to help "design a system that produces adequate power" and "construct power lines that are safe and reliable," he said.

Across the valley, loud laughter erupts from a house in which Nkosi's cousin Satiel and several relatives are watching a Zambian comedy show on a small television.

Young and old cluster around the screen, teenagers wincing at embarrassing comments from their elders.

"I cannot ably explain in words how this has changed my life," Satiel said. "I am now able to do so many things."