Mayor of Jersey City, USA, donates PPEs on behalf of his city to Gomoa West District of Ghana 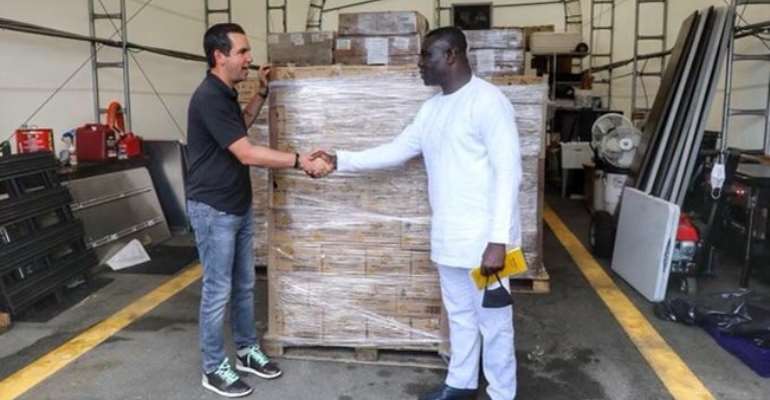 As part of the objectives of Sister Cities International – an organization, which seeks to create global relationships based on cultural, educational, information and trade exchanges, the two communities signed a “sister agreement” in 2018, which has helped strengthen commercial and cultural ties between the two societies. Gomoa West indeed chose a right partner in the U.S. to exchange ideas and to do business with, as Jersey City was named the most diverse city in America in 2017, 2018 and 2020 by the annual WalletHub diversity rankings.

It was therefore against the backdrop of this friendship that the city in the “Garden State,” led by its mayor was inspired to donate hand sanitizers, gloves, and other protective gear to enable its sister community in Ghana fight the spread of COVID-19.

Speaking at the handing over ceremony held at the office of Emergency Management in Jersey City on August 8, 2021, Mayor Fulop acknowledged the significant challenges that the pandemic has caused in all countries – he therefore hoped that the kind gesture of his city would augment the efforts by the Government of Ghana in fighting the spread of the coronavirus, especially in the Gomoa West District.

The 49th mayor of Jersey City also emphasized the need for communities to develop closer ties to foster cultural exchange and business partnerships, which is what informed his city to sign the friendship agreement with Gomoa West District as part of the Sister Cities International Initiative.

He ended with the conviction that the donation would further strengthen the cultural and economic bond between the two communities.

Receiving the items on behalf of Hon. Bismark Baisie Nkum and the people of Gomoa West, Ghana’s Consul General to New York, H.E. Daniel Atta Boafo Kingsley, in the company of Hon. Felix Akom Nyarku, Head of Chancery at the Permanent Mission of Ghana to the UN, thanked Mayor Fulop, the Office of Emergency Management and Homeland Security of Jersey City and the entire residents of the city for their kind gesture to a Ghanaian community during this challenging period. The consul general was also hopeful that the charitable act would as well kick-start a mutually beneficial relationship between Jersey City and the Ghana Consulate in NY.

Latest Photo Reports
Catch up with all the political quotes from our politicians.
Advertise here
More Diaspora (USA)
ModernGhana Links
Ohemaa Mercy to be Honored at the Special 10th Edition of 3G Awards 2021 in USA
Kofi Adoma Nwanwani Receives Another Honors @ 3G Awards 2021 in USA
Minister of Sanitation and Water Resources to be Honored in USA
Kaakyire Kwame Appiah to be Honored @ Special 10th Edition of 3GAwards in USA
First Deputy Speaker of Ghana's Parliament to be Honored in USA
Dan Kwaku Yeboah to be Honored Again in USA
GaDangmes Celebrate Homowo 2021 in Atlanta Georgia
Celebration of a Richly Lived Life – Final Funerary Rites for the Late Opanyin (Elder) Yaw Asiedu-Sarkodie, Aged 87
Sekondi-Takoradi Progressive Club Global inaugurated in US
TOP STORIES